In an unexpected turn of events, Kathy Griffin announced via Twitter on Thursday that she is quitting Fashion Police.

“I thought that I could bring my brand of humor to Fashion Police so beautiful people in beautiful dresses could be teased when appropriate,” she said via Twitter. “I do not want to use my comedy to contribute to a culture of unattainable perfectionism and intolerance towards difference. I want to help women, gay kids, people of color, and anyone who feels underrepresented to have a voice and a LAUGH.”

Griffin’s decision to leave the E! show comes less than 24 hours after she was quoted as saying she wouldn’t have made the joke about Zendaya‘s hair that put Fashion Police host Giuliana Rancic in hot water.

In an interview with the Chicago Sun-Times’ Splash Magazine, Griffin said Rancic – who said in an Oscar post-show that Zendaya and her dreadlocks look like “she smells like patchouli oil or weed” – should rely on her “great insider gossip” rather than the humor of others.

Griffin is the second host to leave the show in the last two weeks. Kelly Osbourne announced on Feb. 27 that was she was stepping down to “pursue other opportunities.”

E! confirmed the exit of Griffin, who only joined the show in January as Joan Rivers’s replacement.

“We wish her all the best and are grateful for her time on the show, as well as the many laughs that she gave us all. Fashion Police will return, as scheduled, on Monday, March 30 at 9 p.m. with our talented co-hosts Giuliana Rancic and Brad Goreski and executive producer Melissa Rivers. No further information is available at this time.”

Never has Fashion Police undergone such intense scrutiny in its five-year history than it has in the last two months – all due to Rancic’s reference to Zendaya‘s hairstyle at the Oscars. Rancic apologized twice for what she said – first via Twitter then on the air – but the joke continued to dominate the pop culture zeitgeist on shows like The Talk and The View.

PEOPLE has since learned that Rancic’s complete comments about Zendaya during the post-Oscar show did not air in full. Rancic said she admired the Disney Star’s fashion sense but found her long locks “really heavy – it overwhelms her, and it’s just too boho.” Rancic then made peace-sign symbols and went on to say that “Zendaya is more high-fashion. The hair to me on her is making her a little more boho. Like I feel like she smells like patchouli oil. Or weed.”

On Wednesday, Sharon Osbourne expressed words of support for her daughter Kelly, who started on Fashion Police in 2010.

“I stand by her. You know, she had an amazing five years on the show and she learned so much from Joan [Rivers],” the elder Osbourne, 62, told Extra on Wednesday. “It was just her time. She’s got to grow up, got to move into the big world.” 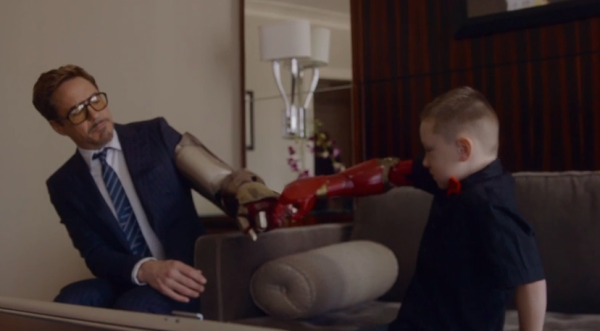 Watch Robert Downey Jr. Give a Real Bionic Arm to an Incredibly Dapper Kid
Next Up: Editor's Pick