A portrait of Kremlin critic Boris Nemtsov and flowers are pictured at the site where he was killed on Feb. 27, 2015 with St. Basil's Cathedral seen in the background, at the Great Moskvoretsky Bridge in central Moscow on March 6, 2015.
Maxim Shemetov—Reuters
By Simon Shuster / Moscow

Early in the morning on March 9, Alexei Venediktov, one of Russia’s most prominent journalists, gathered a backpack full of his belongings, told his son to do the same and—fearing for their lives—both of them headed to a Moscow airport to catch a flight to Israel. It was not a bout of paranoia. Venediktov’s close friend of many years, the opposition leader Boris Nemtsov, had been gunned down near the Kremlin the previous week, and the subsequent twists in the investigation suggested that Venediktov could be next.

“We knew that there was a hit list,” he tells TIME a few days later, having returned to the capital and resumed working as editor of the radio station Echo of Moscow, one of the last broadcast news outlets where Russians can still hear direct criticism of President Vladimir Putin. Stout and good-humored, with an unruly crown of curly white hair, Venediktov, 59, would not reveal exactly who warned him that he was in danger. (There is, perhaps, some clue in the fact that he sits on the Interior Ministry’s Social Council, an advisory body to the national police.) But it would not take a genius in any case to see the clouds gathering above him.

In the past two weeks, various warnings and threats to opposition figures have suggested that Nemtsov’s murder could be just the beginning of a broader campaign of political terror. Reports of a hit list of dissidents have been circulating in the Russian press for days. Along with rumors of an unfolding struggle among security factions within the Kremlin, these events have created an atmosphere of fear unlike any the Russian capital has seen in years, at least since Putin’s re-election in 2012 inaugurated a broad crackdown on dissent. The President, for his part, has not helped calm the situation by disappearing from public view since March 5, an extremely long period for him to go missing even in the best of times.

And these have hardly been the best of times for Russian opposition figures, and for Venediktov in particular, as the confounding investigation into Nemtsov’s killing unfolds. On March 8, authorities charged two men from the predominantly Muslim region of Chechnya with carrying out the murder, allegedly to punish Nemtsov for a verbal slight against Islam. Not only did this shock the victim’s allies—Nemtsov had never been known to disparage religion—but it set a frightening precedent. Prominent critics of Putin and the Kremlin began to wonder who else among them could be attacked for supposedly offending Muslims.

The most obvious target would be Venediktov. In early January, he was branded an enemy of Islam by the Kremlin’s loyal governor in Chechnya, Ramzan Kadyrov, who styles himself as the guardian of Muslims in Russia and around the world. “Venediktov has turned the Echo of Moscow into the main anti-Islamic mouthpiece,” Kadyrov wrote on Jan. 9. “I am firmly convinced that the authorities must call the radio [station] to order,” he wrote on his Instagram account. “Otherwise people will be found who will make Venediktov answer for it.”

Such threats from high places were nothing new to Venediktov. In early 2012, Putin himself blew up at the editor during an official dinner, accusing him of “pouring diarrhea on me from morning till night” on his radio programs. Though he says he and Putin talked through those tensions later, Venediktov had by then gotten used to going around with bodyguards, which he had hired after a series of threats from pro-Kremlin activists made him fear for his family. On one occasion in 2009, someone left a log outside the door of his apartment with an ax sticking out of it.

“But those were just hooligans,” he says in his office at the radio station, looking pale from exhaustion after his precautionary getaway in Israel. “What we’re seeing now is totally new, it’s demonstrative.” The people who killed Nemtsov, he says, seem to have been working from a list of “enemies of the people” slated for extermination. Apart from him and Nemtsov, he says the list included Putin’s one-time political nemesis, Mikhail Khodorkovsky, the oil tycoon who spent 10 years in prison before being released in 2013 and going into exile in Switzerland. (In an apparent warning to Khodorkovsky, his spokeswoman in Moscow, Kulle Pispanen, found a funeral wreath outside the door of her apartment when she returned home on March 11.)

But Venediktov still refuses to believe that Putin has explicitly ordered some kind of campaign to terrorize his critics. “This is not an errand for a czar,” he says. “For him to shut down our radio station is nothing, it’s as easy as spitting for him. Who am I to Putin? Who is Nemtsov?”

Realistically, neither of them could pose any real threat to a leader with near total control of the mass media in Russia and an approval rating upwards of 80%. But ever since last spring, when Putin told a gathering of top officials and lawmakers that there were “national traitors” in their midst, many of the leading figures in the opposition have felt like a bull’s-eye had been placed on their backs.

“If Putin makes a decision to physically eliminate me, it will not be easy for me to survive, not even in Europe,” Khodorkovsky told TIME in an interview this past fall in Berlin. “In his inner circle, there are people who are more and more inclined to the use of force, and we see that they carry out such operations.”

Amid the climate of paranoia that has descended on Moscow’s political class, the common wisdom among analysts and dissidents is that various factions in Putin’s circle have gone to war, competing with each other to prove that they are the most loyal, the most efficient in fulfilling the President’s implicit and explicit instructions with regards to “national traitors.”

An earlier phase of this struggle seemed clear from the raft of legislation introduced over the past year, as lawmakers tried to outdo each other with ever more severe restrictions on the media, the Internet and the ability of citizens to organize protests and finance social activism. But now, Venediktov says, various branches of Russia’s security forces have likewise started openly competing for Putin’s attention. As a result, “the state has lost its monopoly on the use of violence, which is an extremely dangerous state of affairs.”

The security forces in Chechnya have of late been trying to advertise themselves as the truest of Russian patriots, the ones most willing to “carry out any order in any spot in the world.” That’s how Kadyrov put it in December, when he put on an exhibition of the army under his command. But such posturing could not avoid a level of friction with Russia’s other security hierarchies, says Venediktov, above all the agency known as the FSB, which took over for the KGB after the fall of the Soviet Union.

On the night of March 7, FSB director Alexander Bortnikov took the unusual step of going on television to announce the arrest of the two main suspects in Nemtsov’s murder. One of them, Zaur Dadaev, turned out to be the deputy commander of an elite counter-terrorism force in Chechnya, and so well respected in his region’s security structures that Kadyrov personally praised him as “a real patriot of Russia” immediately after he was charged with killing Nemtsov. But patriot or not, Dadaev was apparently given some rather rough treatment while in the custody of the FSB.

According to the Kremlin’s own rights watchdog, Dadaev showed signs of torture, including electrocution, when prison monitors visited him on March 10 at the FSB’s notorious detention center in Moscow. “He said wires were attached to his toes and electricity shot through them,” Andrei Babushkin, who oversees the penitentiary system within the Kremlin Council on Human Rights, said at a news conference in Moscow on Friday. “The injuries he showed us were consistent with this.”

The chairman of the council, Mikhail Fedotov, then stated that Putin had been informed of these strange goings on. But he could offer no information as to the President’s reaction, as he appears to have gone into hiding. The last photo of him on the Kremlin website is dated March 11, during a meeting with the governor of the Karelia region. Local media, however, were reporting on this meeting as early as March 5, adding to the air of uncertainty around Putin’s whereabouts, his health and the firmness of his grip on the various branches of power under his command.

“They are all his clans, his creations,” Venediktov says, referring to the FSB and the Chechen forces known as Kadyrovites. “Putin does not easily give up his own. He would need a very serious mound of evidence to really go after one of them.”

It is not clear whether Putin has seen any such evidence from the FSB against members of the Kadyrov clan. But in one of his last public appearances before dropping out of sight more than a week ago, Putin hinted that he takes the murder of Nemtsov more personally and more seriously than other “politically tinged” crimes, as he put it. “We need to rid Russia of the kind of shame and tragedy that we have just witnessed,” he told a gathering of Russian police commanders from around the country on March 4. “I’m talking about the insolent murder of Boris Nemtsov right in the center of the capital.”

Judging by the mood in Moscow, however, the fear of such insolence has only grown in the past week as Putin remains unseen. “The atmosphere right now in our country is very dangerous, very threatening,” says Nikolai Svanidze, another member of the Kremlin rights council. “It is an atmosphere of growing hatred and aggression,” he says. In response, the council has decided to call a meeting at the end of the month to provide the Kremlin with ideas on how to cool these tensions, and hopefully Putin will by then reemerge to receive their advice.

But Venediktov isn’t sure he wants to wait around for that to happen. “I feel like a hostage here,” he says in his office. So it may be best, he says, to follow Putin’s lead and disappear for a while, maybe get out of the country again. “Maybe a long vacation,” he says. “Until things calm down.”

Read next: Russia’s Empire of Fear 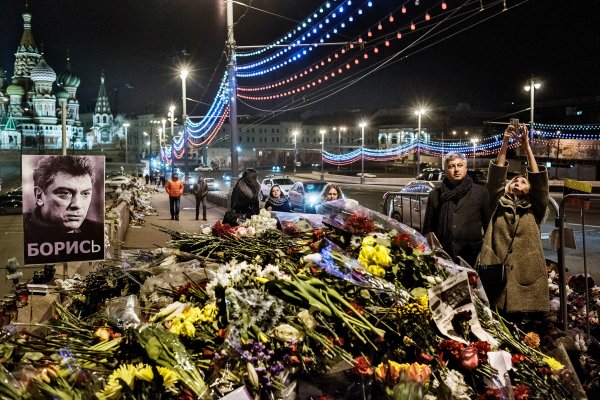 Russia’s Empire of Fear
Next Up: Editor's Pick