Firing squads have returned to the headlines this week, as Utah took steps toward allowing that method of execution if other options become unavailable. Even though some experts say firing squads are an effective method of carrying out capital sentences, the majority of Americans are put off by the idea.

But when Utah executed a Death Row inmate by firing squad four decades ago, citizens felt very differently about it. In 1976, when Gary Mark Gilmore was sentenced to death by firing squad, TIME reported that dozens of men were calling the Utah state prison warden asking to be one of the shooters. Gilmore, then 35, was a long-time resident of criminal-justice institutions, starting with a reformatory at age 14; in 1975, he killed a gas-station attendant and a motel clerk, apparently without motive. And, when his lawyers appealed, he tried to force them not to. His execution was to be the nation’s first after the Supreme Court lifted a decade-long moratorium on the death penalty.

His argument? To be executed would be to “die with dignity,” he said. And he took advantage of Utah’s law allowing a prisoner to choose his method of execution from either hanging or firing squad to elect for the latter. In its Nov. 22 1976 issue, TIME described how it would go ahead:

On the other hand, according to the new lawyer he chose, Gilmore believed that life in prison was cruel and unusual. So much so, that when his execution was stayed, his girlfriend smuggled Seconal sleeping pills to him during a visit, and they both took overdoses. He was rushed to a hospital and ended up back in prison, and progress on his case was delayed while he recovered. She fell into a coma.

In December, following a hunger strike by Gilmore, a hearing board decided that his wish to die by firing squad could move forward. Asked by a judge whether he had anything to say, his only request was not to be hooded during the execution.

Still, even though the date was set, the execution did not happen as planned, as TIME reported on Dec. 13 the same year:

Meanwhile, Gilmore and his family again got rid of his lawyer, and sold the rights to his story in a deal that resulted in a 1982 movie, The Executioner’s Song, in which Tommy Lee Jones played Gilmore. The entrepreneur who bought the rights was invited to witness Gilmore’s execution.

That event finally took place in January of 1977. “It was an old mahogany office chair with a black vinyl seat and back,” TIME reported on Jan. 31. “There, in an old tannery known as the Slaughterhouse in the southwest corner of the Utah State Prison, sat Gary Mark Gilmore, 36, freshly shaven and wearing a black T shirt, crumpled white trousers and red, white and blue sneakers. His neck, waist, wrists and feet were loosely bound to the chair. Twenty-six feet away hung a sailcloth partition with five slits. Hidden behind the curtain stood five riflemen armed with .30-.30 deer rifles, four loaded with steel-jacketed shells, the fifth with a blank.”

Gilmore was administered his last rites. A target was pinned over his heart; he was hooded, despite his earlier request. All four of the loaded bullets hit their target. Gary Gilmore became the first prisoner to be executed in the U.S. in a decade.

Gilmore’s desire to die, as well as the timing of his execution, made his story irresistible to many Americans, especially at a time where public approval of capital punishment ran high. But those factors that made his case intriguing were the same ones that still limit what can be learned from his case. After all, a precedent that relies on an inmate who advocated for his own execution is one with few applications. “Gilmore would not allow the legal points to be made,” law professor Charles L. Black Jr. explained at the time. “Gilmore cannot give away other people’s rights.”

Read more about Gary Gilmore, here in the TIME Vault: After Gilmore, Who’s Next to Die? 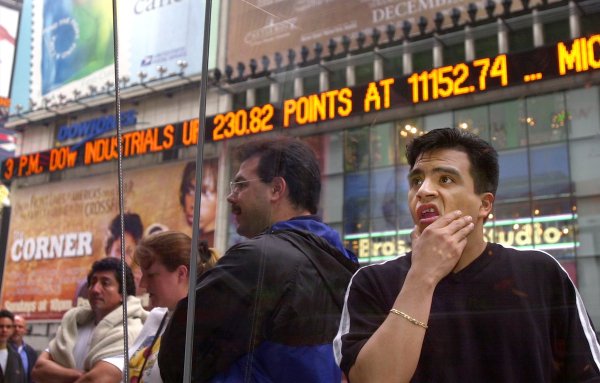 What Did We Learn From the Dotcom Stock Bubble of 2000?
Next Up: Editor's Pick