Can We Build an Internet That Includes the Hearing Impaired?

Like any good Apple fanboy, I stopped everything last Monday to see what new goodies CEO Tim Cook had up his sleeve or, in this case, on his wrist. I came away uncertain if I need an Apple Watch—and wondering why a company as admired for devices that break down barriers for people with disabilities had chosen to make this event inaccessible for millions of people like me. My frustration: The presentation’s live stream didn’t have real-time closed captioning.

This is a common problem for people with hearing loss in the digital age, and the next day I found myself equally aggravated to see that just one major news website—CNN—provided live subtitles for Hillary Clinton’s email press conference. MSNBC, CBS, Fox, ABC, Bloomberg, and CSPAN all lacked live captioning on their streams, especially baffling since they all included them in the live TV presentations of the same event.

Such is, but should not be, life in the Digital Age as one of the 36 million Americans who have hearing loss or are deaf. Those of us who rely on captions—I have worn bilateral hearing aids since I was in the second grade—are being left behind, stuck reading recaps, tweets, and live-blogs instead of experiencing key cultural and news events firsthand like everyone else.

The irony of the problem is that Deaf advocates had enjoyed a near-complete triumph in getting the FCC and Congress to force broadcast and cable TV outlets to provide live captioning in the late 1990s. Then, the party moved online and those gains became increasingly worthless in the Internet age.

As streaming video improved—and became more critical to basic cultural literacy—access has gotten worse. In 2012, the FCC finally set up some rules that are only now kicking in for broadcasters regarding what they post online, but they’re very weak. By next month, programs shown on TV and posted in full must have closed-captioning within 45 days of airing. By April 2016, that window drops to 15 days. But video “clips” are exempt, as is live programming and, of course, all made-for-Web content.

There are legal challenges in the works regarding some situations, such as the federal lawsuit filed against Harvard and MIT last month to force them to caption online lectures and other educational materials. It boggles the mind that nobody at either of those liberal bastions—located in the same region that boasts WGBH, the Boston PBS station that essentially invented closed captioning—said, “Oh. Right. Duh. There. Fixed.” But neither the law, the courts, nor anyone’s conscience has yet to touch news or entertainment content providers in any important way.

What’s more, it’s stunning how little they seem to care, given that it’s not just a terrible moral decision but an awful commercial one as well. The number of Americans with hearing loss—already about 17% of the adult population—will skyrocket as Baby Boomers age and as Millennials and Gen Xers start to pay in decibels for their lifelong addictions to earbuds. An awful lot of people are going to start missing out on an awful lot of stuff. You’d think that advertisers would at least want their commercials captioned, given the millions they spend trying to get their messages out. But almost no ads online—and very few on TV, actually—are subtitled.

Every person with hearing loss has a list of personal grievances. I pay as much as you for HBO Go, so why don’t the extras and featurettes for Game of Thrones have subtitles just like the show itself? I’ve waited seven years and counting to watch Neil Patrick Harris’ pioneering Web series Dr. Horrible’s Sing-Along Blog, but there were no captions when it first appeared for free—and still aren’t even now when they get $3 an episode on iTunes. And I’d love to know what the big deal is with that lady who bathes in milk and Froot Loops while interviewing the president—or something—but, again, no captions.

Google, owners of YouTube, deserve props for offering tools for its posters to caption the videos they upload. But YouTube also provides an automated captioning “service” of such poor quality that it creates more, not less, confusion.

An Apple spokeswoman emailed me to say the iWatch presentation is now available on their site with captions, which really is great. But it still fails to include folks like me in the making of such cultural, collective moments. That example was merely a small disappointment; in the case of breaking news, the imperative to communicate effectively to the largest possible audience is occasionally a matter of life and death.

There are two obvious solutions. The FCC, fresh off of reclassifying the Internet as a public utility, can try to impose stricter rules on what must be captioned and how fast. Or Silicon Valley could step forward with yet another killer app. Surely someone is close to creating software with voice-recognition capability that isn’t a joke, so captions can be both accurate and cheap.

Either way, someone needs to get on this sooner rather than later. Most hearing loss is irreversible and inconvenient, as millions of Americans are due to discover in the coming decade. 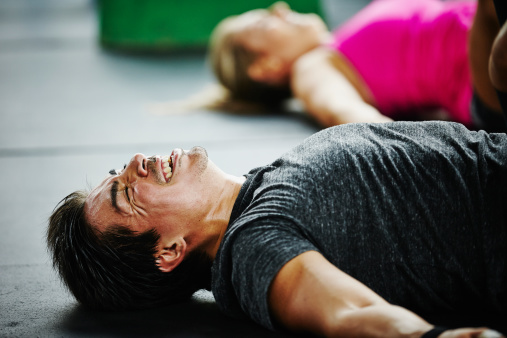 4 Apps That Can Help You Relax, Focus and Sweat
Next Up: Editor's Pick