Here's Kate Middleton With the Cast of Downton Abbey

Catherine, Duchess of Cambridge (C) poses with cast, crew and producers of 'Downton Abbey' during an official visit to the set of Downton Abbey at Ealing Studios in London, England on March 12, 2015.
Chris Jackson—Getty Images
By Simon Perry / People

Princess Kate meeting the cast of Downton Abbey is the most English thing to happen since tea met crumpets.

After touring the set of the smash Masterpiece drama on Thursday, the expectant royal, 33, sat down for a photo with the ensemble.

Anglophiles, you’re going to want to pour yourself a cuppa and spend a long moment with this glorious picture.

Most of the cast is assembled, with an amusing mix of contemporary and period clothes – a distinction highlighted in the front row, with Michelle Dockery (Lady Mary) in her ’20s garb and Laura Carmichael (Lady Edith) in a current look.

Keep up with your favorite celebs in the pages of PEOPLE Magazine by subscribing now.

“It was a surreal and exciting experience to be at work and be visited by a member of the royal family,” Carmichael told PEOPLE. “She has watched the show and loves it and that’s really lovely.”

Carmichael shared that show creator Julian Fellowes had thanked Kate in his speech “for mentioning when she visited America that she’d seen it and loved it. He thanked her for helping us.”

During her two-hour visit on set at London’s Ealing Studios – the site of many of the show’s interior shots – Kate was drawn to one room in particular.

“She spent the longest time in the kitchen, so me and Lesley [Nicol, who plays head cook Mrs. Patmore] are taking that as a compliment,” says Sophie McShera, who plays assistant cook Daisy.

“We told her that two of the hobs work – because we like having steaming pans,” Nicol shared.

And though Kate appeared to observers to be a little starstruck, McShera says, “Everyone around her was more starstruck.”

Of course, the visit wouldn’t be complete without some playful upstairs-downstairs rivalry – in this case, between Brendan Coyle (valet John Bates) and Hugh Bonneville (Lord Grantham).

“Brendan and Hugh were fighting over who was her favorite character,” says Carmichael. “But she didn’t reveal.”

For their part the actors – who are currently shooting the drama’s sixth season – didn’t pass on any tidbits about future episodes. “I don’t think we’ve given her any spoilers, no special treatment,” says McShera.

Kate ended up spending an hour longer than she had planned. Now, the cast hopes the eight-months pregnant royal is resting.

“I think she should go and have a sit down and take her shoes off,” says Nicol. “It’s quite hard work on those heels.” 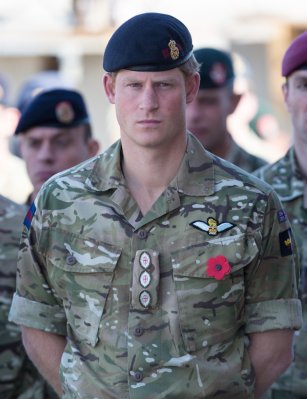 Prince Harry To Leave the Armed Forces This Year
Next Up: Editor's Pick