Ferguson Police Hunt for Suspects in Shooting of 2 Cops

Police in Ferguson took people into custody for questioning after surrounding a local home Thursday morning, as they searched for suspects in the shooting of two police officers that rocked the Missouri town anew months after protests began over the shooting of an unarmed black teenager.

Television footage showed police surrounding a house at about 11 a.m. local time, following a shooting the St. Louis police chief characterized as “an ambush.” People were removed from the house by police, authorities confirmed, but no one had been arrested shortly after noon.

“People have been taken in for questioning,” said Brian Schellman, a St. Louis County Police spokesperson. “I cannot say how many at this point because I don’t know. Waiting to be briefed by detectives once they are done at the scene.”

About 150 protesters had gathered in front of the police station on Wednesday after the Ferguson police chief announced his resignation in the wake of a excoriating Department of Justice report that found widespread racial bias among the city’s police. As the crowd began to dwindle around midnight, the shots rang out.

“This is really an ambush, is what it is,” St. Louis County Police Chief Jon Belmar said at a news conference on Thursday.

Police say that three or four shots were fired at the line of police from about 125 yards away. An investigation is ongoing.

“We’re lucky, by god’s grace we didn’t lose two officers last night,” said Belmar, who added that police drew their weapons but did not fire back.

MORE: How to Rebuild the Ferguson Police Department

The protest recalled months of sometimes violent demonstrations, which began after a police officer shot 18-year-old Michael Brown in August and that resurged after a grand jury declined to indict the officer, Darren Wilson, in November. While gunshots were heard during some of those protests, no police officers were shot.

“It’s a miracle that we haven’t had any instances similar to this over the summer and fall,” Belmar said.

Responding to the shooting on Thursday, Attorney General Eric Holder issued a statement in support of the local law enforcement after the “heinous assault.”

“Such senseless acts of violence threaten the very reforms that nonviolent protesters in Ferguson and around the country have been working towards for the past several months,” Holder said. “We stand ready to offer any possible aid to an investigation into this incident, including the department’s full range of investigative resources.”

“We reject any kind of violence directed toward members of law enforcement. It cannot and will not be tolerated,” the statement said.

“We specifically denounce the actions of stand-alone agitators who unsuccessfully attempt to derail the otherwise peaceful and non-violent movement that has emerged throughout this nation to confront police brutality and to forward the cause of equality under the law for all. We must work together to bring peace to our communities.” 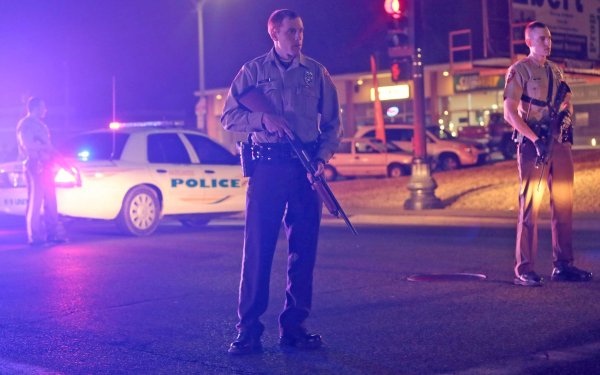 Witness the Aftermath of 2 Police Shot in Ferguson
Next Up: Editor's Pick