How Mexican Immigration to the U.S. Has Evolved

Image of Mexican immigrants working with sickles to cut weeds along the side of a road outside of Chicago in 1917
Chicago History Museum / Getty Images
By The John W. Kluge Center at the Library of Congress

This post is in collaboration with The John W. Kluge Center at the Library of Congress, which brings together scholars and researchers from around the world to use the Library’s rich collections. The article below was originally published on the Kluge Center blog with the title The History of Mexican Immigration to the U.S. in the Early 20th Century.

As a Kluge Fellow at the Library of Congress, historian Julia Young is currently researching a new book on Mexican immigration to the U.S. during the 1920s. She sat down with Jason Steinhauer to discuss the history of this migration and the similarities and differences to immigration today.

Hi, Julia. By way of background, could you provide an overview of the flow of immigrants from Mexico into the United States during the 19th and early 20th centuries?

For almost a half-century after the annexation of Texas in 1845, the flow was barely a trickle. In fact, there was a significant migration in the other direction: Mexican citizens who left the newly annexed U.S. territories and resettled in Mexican territory.

Beginning around the 1890s, new industries in the U.S. Southwest—especially mining and agriculture—attracted Mexican migrant laborers. The Mexican Revolution (1910-1920) then increased the flow: war refugees and political exiles fled to the United States to escape the violence. Mexicans also left rural areas in search of stability and employment. As a result, Mexican migration to the United States rose sharply. The number of legal migrants grew from around 20,000 migrants per year during the 1910s to about 50,000–100,000 migrants per year during the 1920s.

This same period saw massive numbers of immigrants arrive in the U.S. from Asia and Eastern and Southern Europe. Were Mexican immigrants viewed similarly or differently?

There was concern among the U.S. public, as well as policymakers and the press, that “new” immigrants from Eastern and Southern Europe as well as Asia were somehow different from previous generations of Western European immigrants to the United States—and whether their supposed differences posed a threat to U.S. society and culture. The so-called science of eugenics helped drive this concern—the notion that ethnic groups had inherent qualities (of intelligence, physical fitness, or a propensity towards criminality) and that some ethnic groups had better qualities than others. These beliefs tied in directly to concerns about immigration and immigration policy.

However, Mexicans were sometimes said to have certain positive qualities that made them “better” labor immigrants than the other groups. They were thought to be docile, taciturn, physically strong, and able to put up with unhealthy and demanding working conditions. Perhaps more importantly, they were perceived as temporary migrants, who were far more likely to return to Mexico than to settle permanently in the United States.

Does this explain why Mexico was exempted from the quotas in the Immigration Act of 1924?

Mexico (and in fact, the entire Western hemisphere) was exempt from the quotas in part because of the agricultural lobby: farmers in the U.S. Southwest argued that without Mexican migrants, they would be unable to find the laborers needed to sow and harvest their crops. In addition, migration from the Western Hemisphere made up less than one-third of the overall flow of migrants to the United States at the time. Finally, the perceptions of Mexicans as temporary migrants and docile laborers contributed to the fact that they were never included in the quotas.

Soon after the quotas, the Cristero War erupted in Mexico. What impact did this have on immigration?

Between 1926 and 1929, Catholic partisans took up arms against the Mexican federal government in protest against a series of laws that placed strong restrictions on the public role of the Catholic Church. In a country that was 98 percent Catholic, this provoked a furious response. Many Mexican Catholics were determined to go to war against their government until the laws were overturned.

The Cristero War had a twofold effect: first, it led to new waves of emigrants, exiles and refugees who fled the violence and economic disruption. Second, it politicized Mexican migrants in the United States around the Cristero cause. While not all Mexican migrants supported the Catholic side of the conflict, thousands did. They organized mass protests of the Mexican government from within their communities in the United States.

You’ve found evidence of a court case in Arizona that sheds light on this period. Could you tell us about it and why it’s significant to your research?

While researching my book I kept coming across mentions of a man named José Gándara, a Mexican immigrant who tried to start a Catholic revolt from the U.S.-side of the U.S.-Mexico border in 1927. He was eventually caught in Tucson, where he was subsequently put on trial. In the Library of Congress Newspaper and Periodical collections, I found two Arizona newspapers that documented the case: the Tucson Citizen and the Arizona Daily Star. Both had extensive coverage of the Gándara trial, which was quite dramatic — Gándara had plotted with an exiled Catholic bishop from Mexico, along with numerous other Mexican migrants, and he had enlisted the support of members of the local indigenous Yaqui community. The plot was uncovered by agents working for the U.S. Department of Justice.

During the trial, Gándara’s lawyers — who were prominent Catholics from El Paso — mocked the Mexican government and made eloquent arguments in his defense. In the end, though, Gándara was convicted of arms smuggling and fomenting revolution. He served some time in jail, although he was eventually able to get his sentence commuted, thanks to some powerful supporters within the U.S. Catholic hierarchy. His story was important because it demonstrated how far some Mexican immigrants were willing to go in order to fight the Mexican government during the Cristero War years.

Fascinating. And shortly after that, the Stock Market crashed and altered Mexican immigration once again.

Yes. At the onset of the Depression in 1929, entire industries dried up, and the need for immigrant labor decreased. Many Mexican migrants found themselves suddenly impoverished and tens of thousands of rural workers went back to Mexico. Hundreds of thousands of Mexicans were also deported under unofficial “repatriation” policies led by federal, municipal or city authorities.

I’m often struck by the similarities. Some of the rhetoric and debate about immigration, particularly immigration from Mexico and Latin America, echoes that of the 1920s. It’s not uncommon to hear people describe current migrants as “too different” from the majority culture, as being unable to assimilate or acculturate.

At the same time, immigration today has features that are historically unprecedented, and we shouldn’t make too many direct analogies. For example, immigration is much more diverse today. Migrants from Latin America during the early twentieth century came almost exclusively from Mexico, Puerto Rico, and (to a lesser extent) Cuba. Today, immigrants come from every country in Latin America, and even migration from Mexico has diversified: people come not only from the historical sending states in the Mexican heartland, but also from Mexico’s gulf coast, from the southern states, and from other areas that sent few migrants before the 1980s and 1990s. That means that Mexicans, and Latin Americans more broadly, are creating truly new communities in the United States – communities based around a pan-Latin American identity, as opposed to a regional homeland identity. I think that will be one of the most fascinating areas of research for future historians.

Julia Young is an Assistant Professor of History at The Catholic University of America. Her book “Mexican Exodus: Emigrants, Exiles, and Refugees of the Cristero War” will be published this fall. 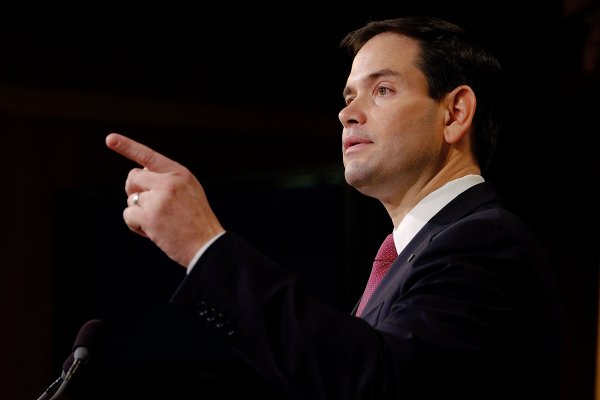 Republican Presidential Hopefuls Stay Out of Senate Fight on Immigration
Next Up: Editor's Pick