A Cinderella for Forever

What comes between “once upon a time” and “happily ever after”? For most fairy-tale heroines, misery and abuse. The young woman loses her parents and is tormented by a wicked stepmother–a phrase that in these fables is virtually a redundancy–until she meets her Prince Charming. The Cinderella story had been around for ages before Charles Perrault added the fairy godmother and glass slipper for his 1697 Cendrillon. So archetypal was the scenario that Kurt Vonnegut, in a 1947 master’s thesis for the University of Chicago, pointed out similarities between Cinderella and the New Testament: the protagonists receive gifts from a high power, then suffer a dreadful ordeal and finally ascend to salvation. Somehow the thesis got rejected, but Vonnegut’s point is piquant, no?

Ella (Lily James) in Disney’s latest Cinderella doesn’t undergo a Calvary, but her stepmother Lady Tremaine (Cate Blanchett) makes the girl’s life a living hell, demoting her to charwoman in the service of the lady’s graceless daughters Anastasia (Holliday Grainger) and Drizella (Sophie McShera). When the King (Derek Jacobi) invites every maiden to a ball at which the Prince (Richard Madden) will choose his bride, Ella is left at home, finding transportation in a transformation courtesy not of God the Father but of her fairy godmother (Helena Bonham Carter). Spoiler alert: Ella leaves a glass slipper fit for a princess bride. It sounds like another of Vonnegut’s story archetypes: boy meets girl. Or rather, Prince meets commoner–and it’s love at first sight.

You may wonder why we need a new Cinderella, for the legend has been a movie staple since the beginning of the medium. That prime cinemagician Georges Méliès conjured up a Cendrillon in 1899, employing trick photography to turn a rabbit into a footman, rats into coachmen and a pumpkin into a carriage. The central role was played by Mary Pickford, the movies’ first star actress, in 1914, and, in a gender-bending switch, by Jerry Lewis in the 1960 Cinderfella. Drew Barrymore brought a feminist spark to Ever After: A Cinderella Story in 1998; Anne Hathaway endured ogres and snakes in the 2004 Ella Enchanted. A few months ago, in Into the Woods, Anna Kendrick’s Cinderella found to her chagrin what happens after “happily ever after.”

The most famous version, Disney’s in 1950, was the studio’s first fully animated feature since Bambi eight years earlier, and it rescued the Mouse House from near bankruptcy. Cherished for the hit songs “A Dream Is a Wish Your Heart Makes” and “Bibbidi-Bobbidi-Boo,” it is also the least faithful to its source. About half of the 74-minute movie is devoted to the shenanigans of the heroine’s closest companions, a quartet of talking mice, and their slapstick battles, Tom-and-Jerry-style, with Lady Tremaine’s obnoxious cat, Lucifer. The Prince, who doesn’t appear until late in the action, speaks only a few words. The big drama is whether the mice Jaq and Gus will be able to lug a key up to the attic that imprisons Cinderella. Neither Christlike nor true to Perrault, this is one Disney feature that looks coarse and charmless today.

Given all these revisionist versions, including its own, Disney wisely decided to make a plain old visionist one. The third recent live-action film spun off from its classic cartoon features–after Tim Burton’s Alice in Wonderland and the Angelina Jolie–starring Maleficent, from Sleeping Beauty–this Cinderella, written by Chris Weitz and directed by Kenneth Branagh, plays it straight and pretty. Make that gorgeous: the settings by Dante Ferretti and the gowns by Sandy Powell (each with three Oscar wins) turn the film into a fantasyland that is its own theme park.

Less a remake of the 1950 movie than a correction, this Cinderella does without the old standards or new ones. Though it often seems ready to burst into song, it doesn’t, instead relying on Patrick Doyle’s sumptuous, nonstop score. It also reduces the mice, now CGI critters, to minor characters: Cinderella chats with them, but they don’t talk back, content to await their roles as pumpkin-coach horses when the fairy godmother shows up.

Julie Andrews as Cinderella in 1957 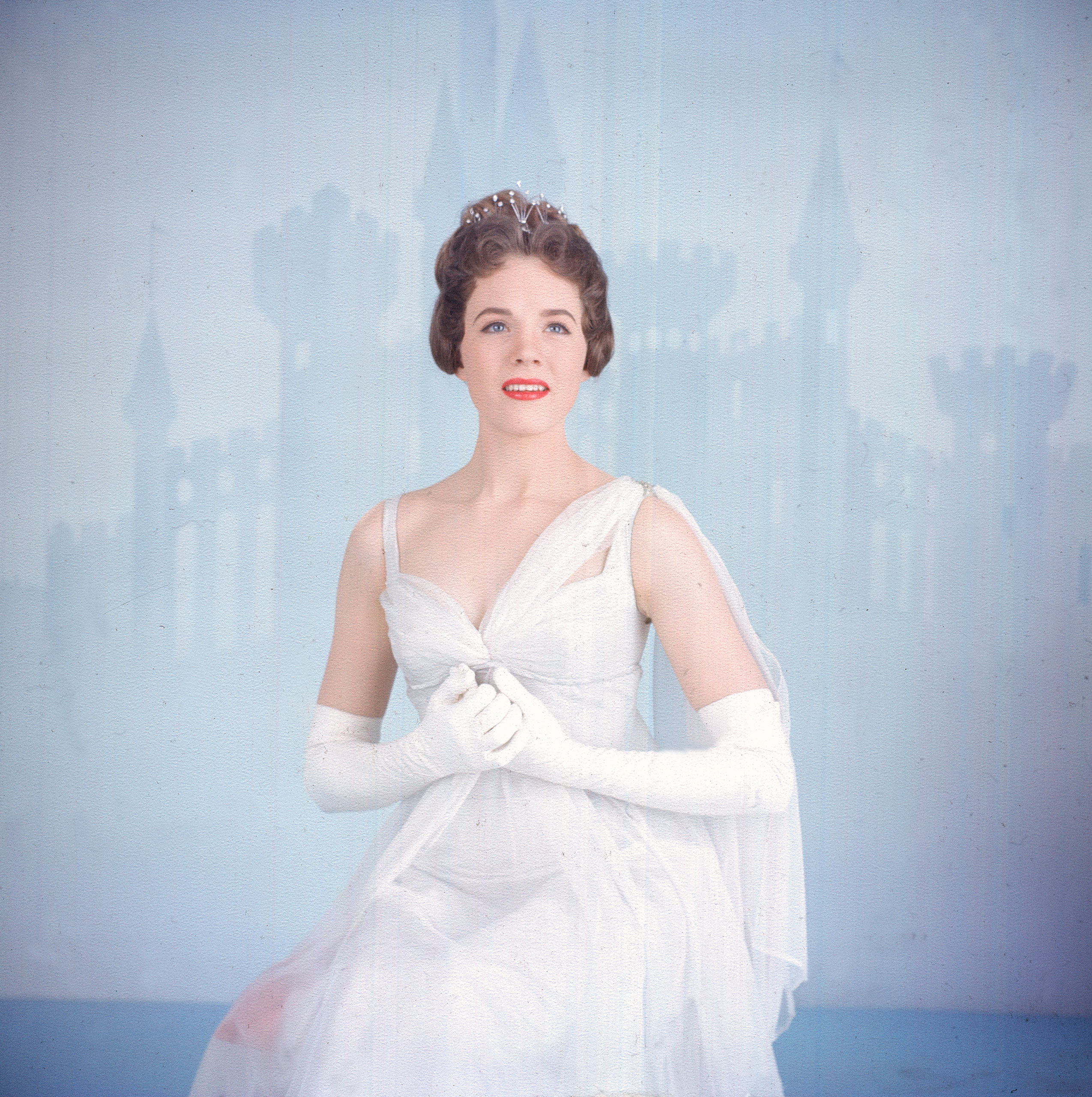 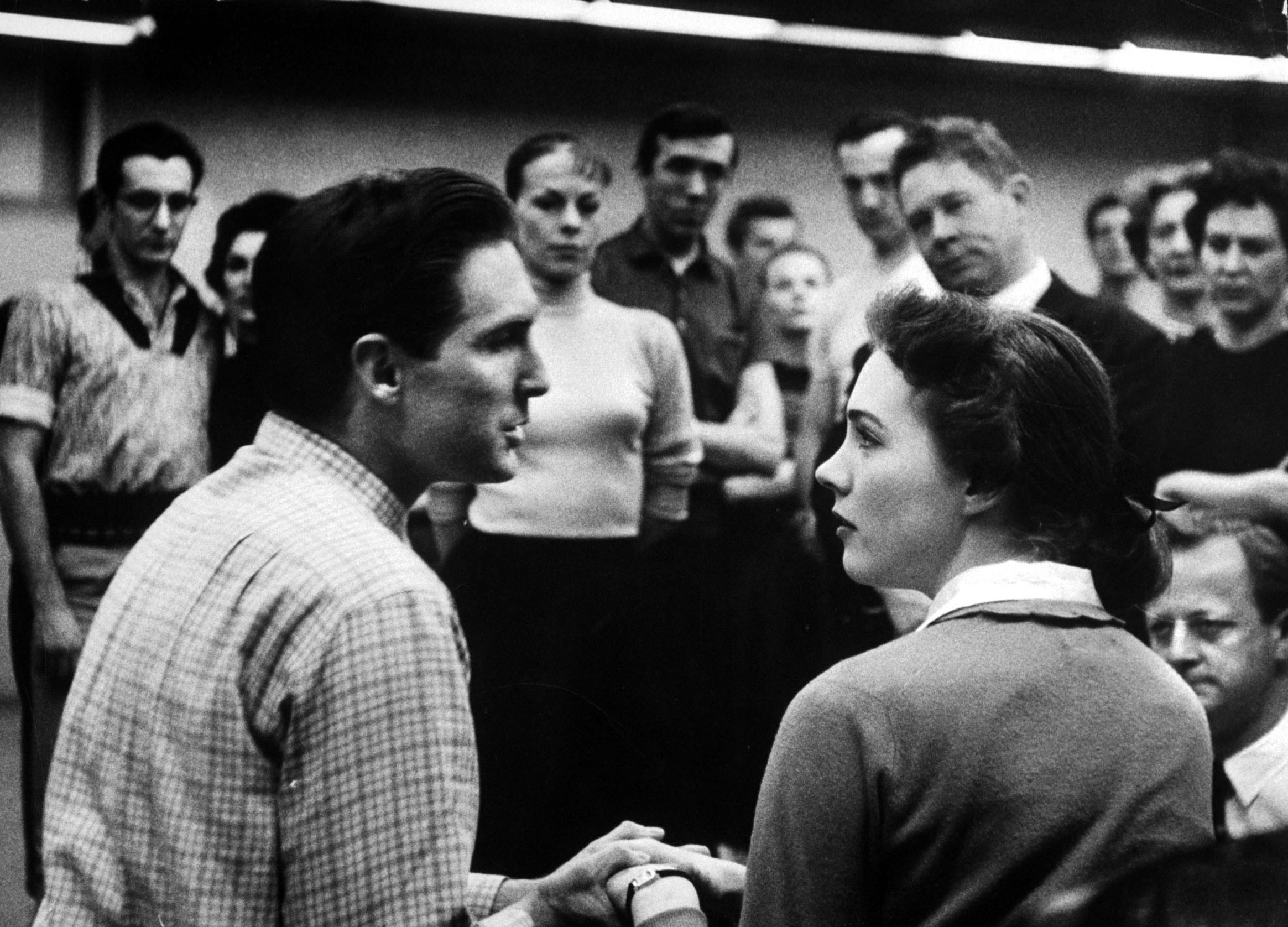 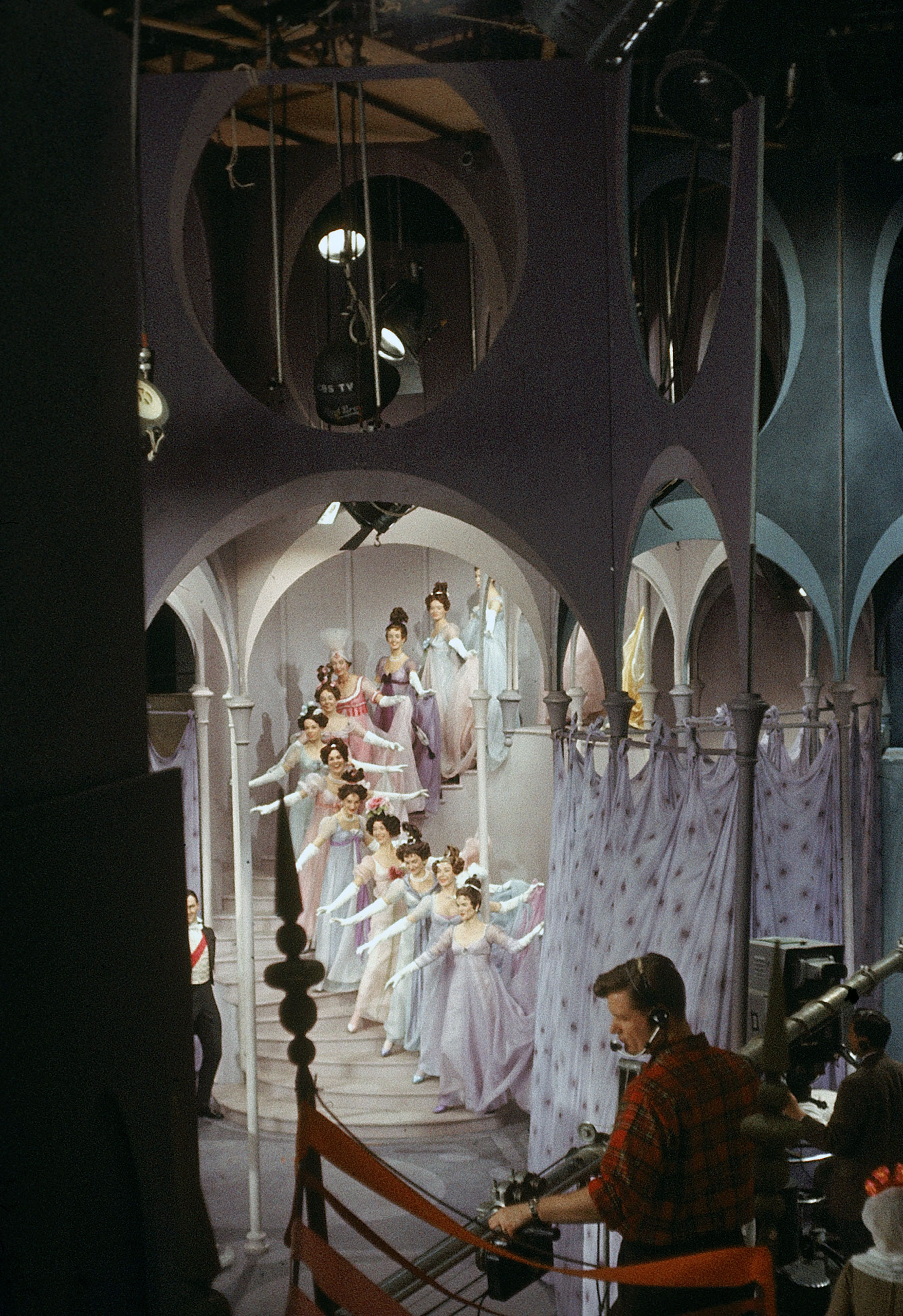 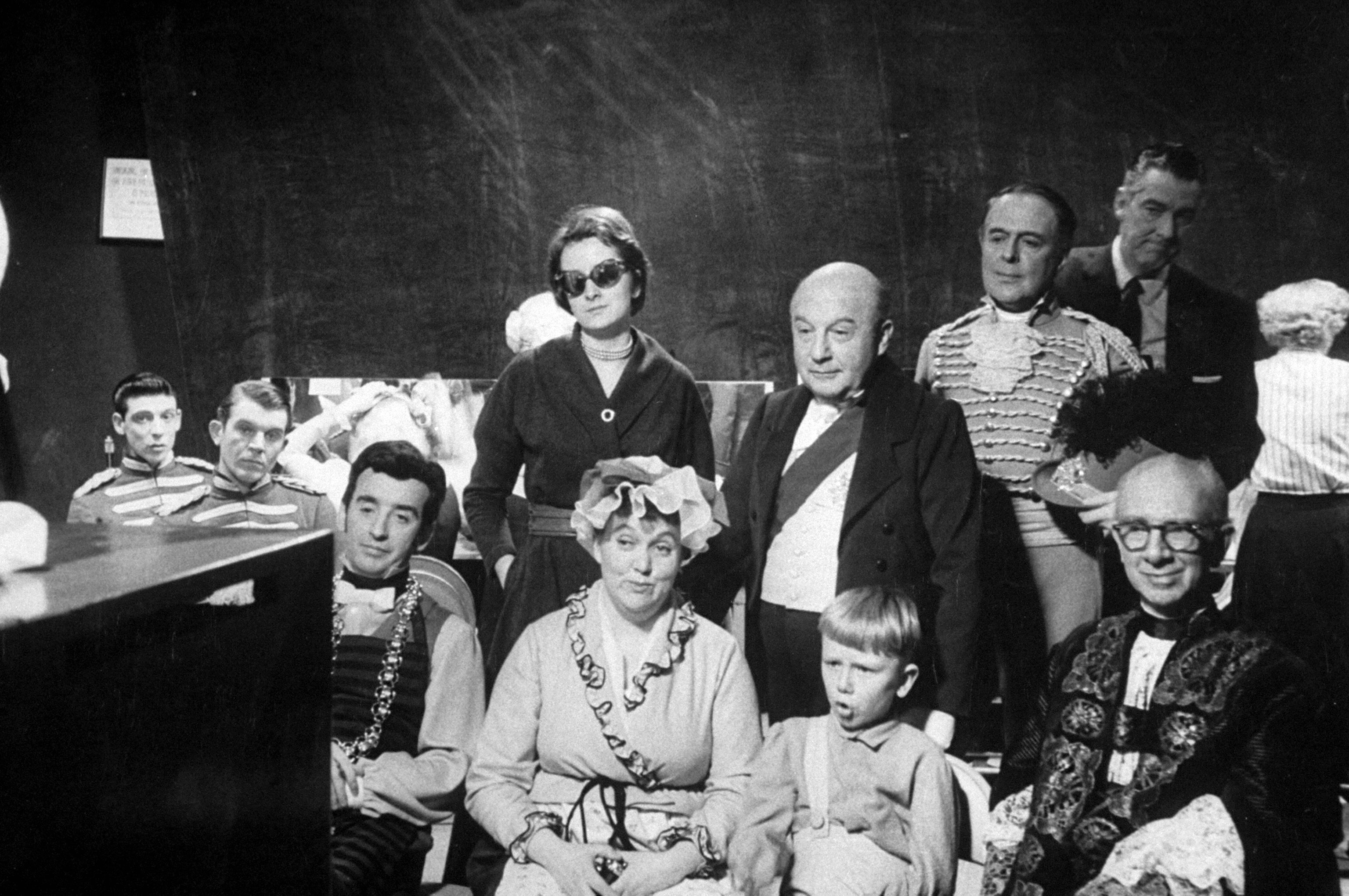 Caption from LIFE. Watching the star, members of the cast gather around a monitor television set, some of their faces beaming satisfaction, others still nervous lest something go wrong in the last few moments of the show. They are listening to Julie Andrews sing A Lovely Night, a musical recapitulation of the royal ball.
Gordon Parks—The LIFE Picture Collection/Getty Images 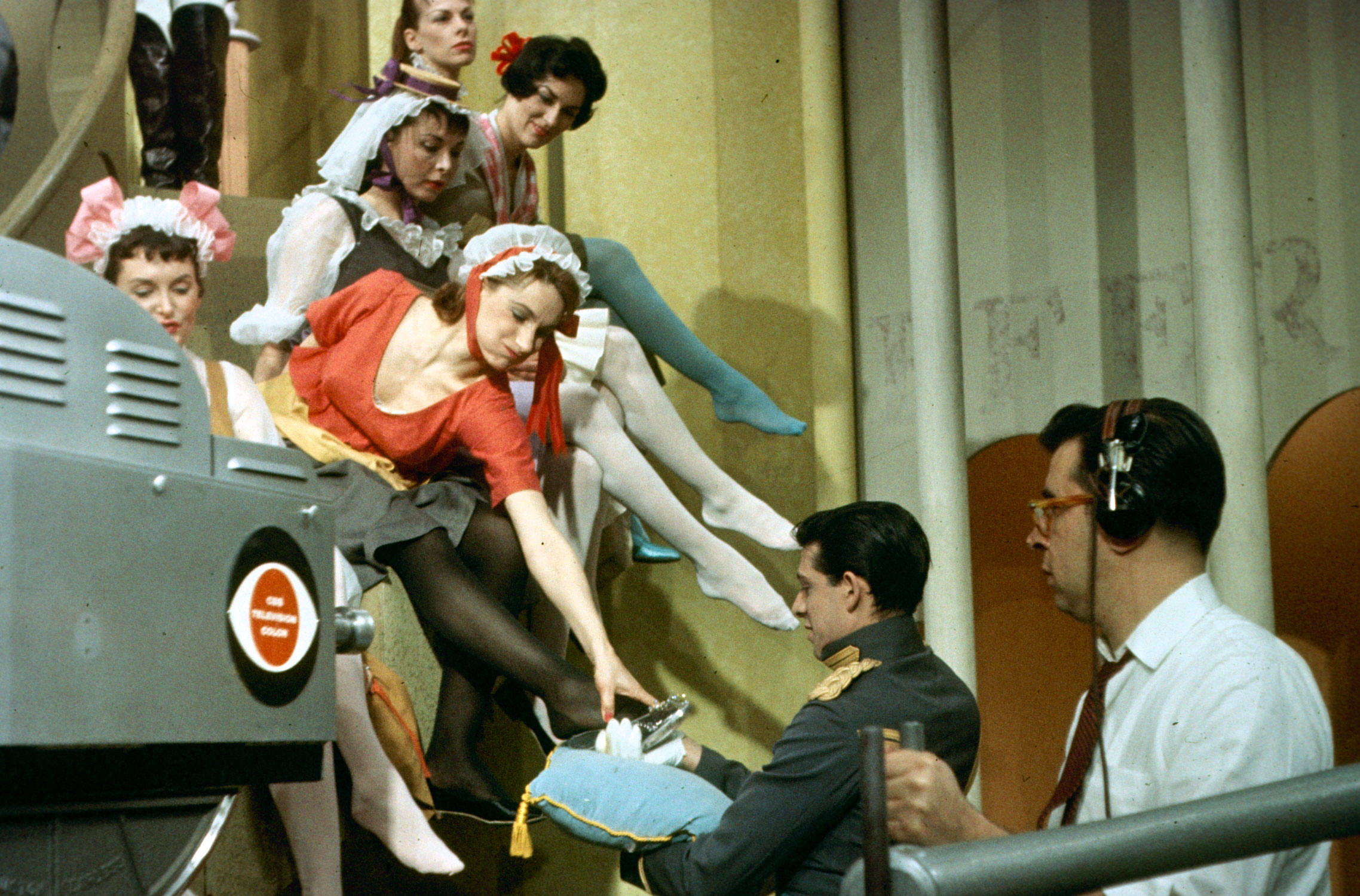 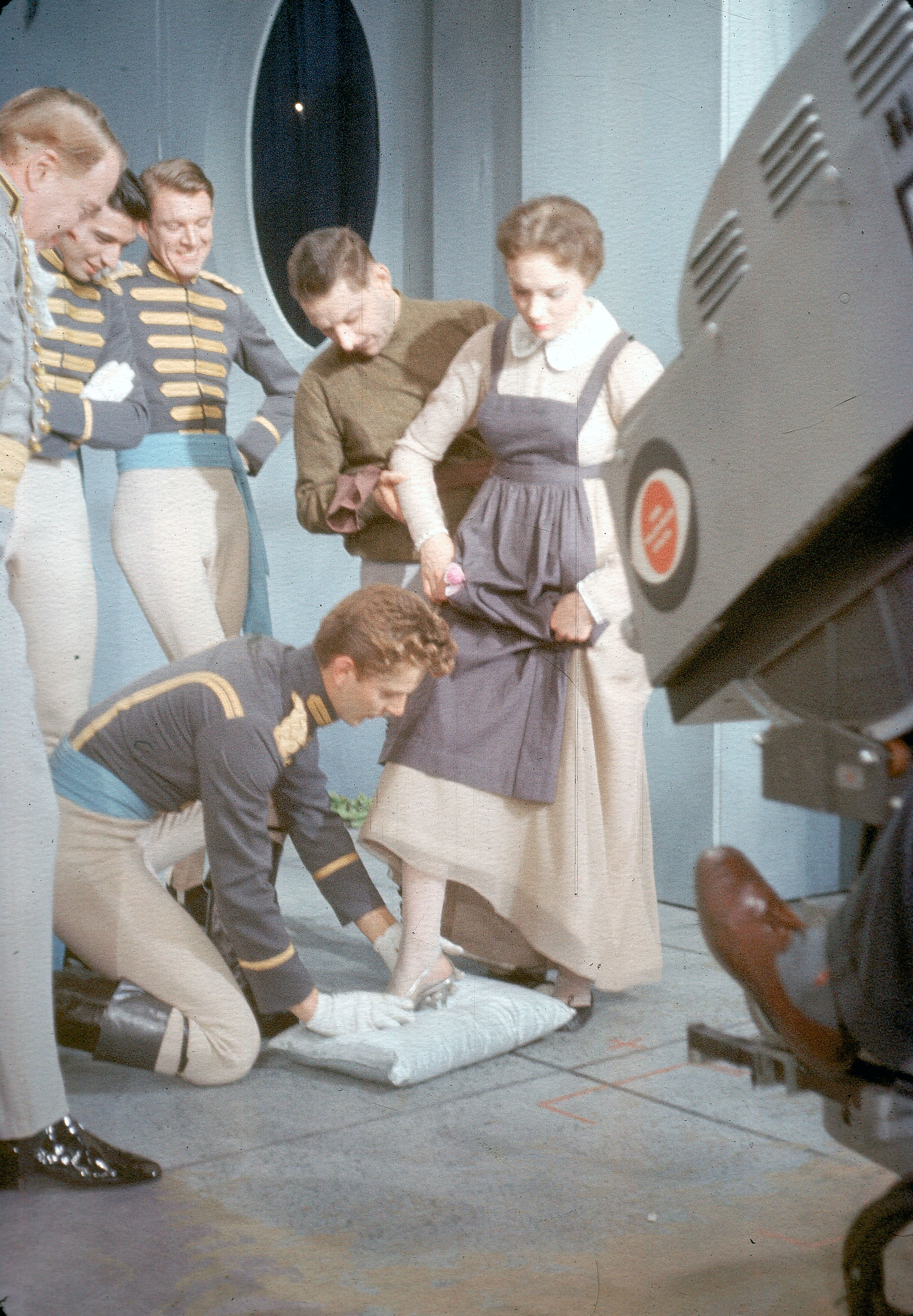 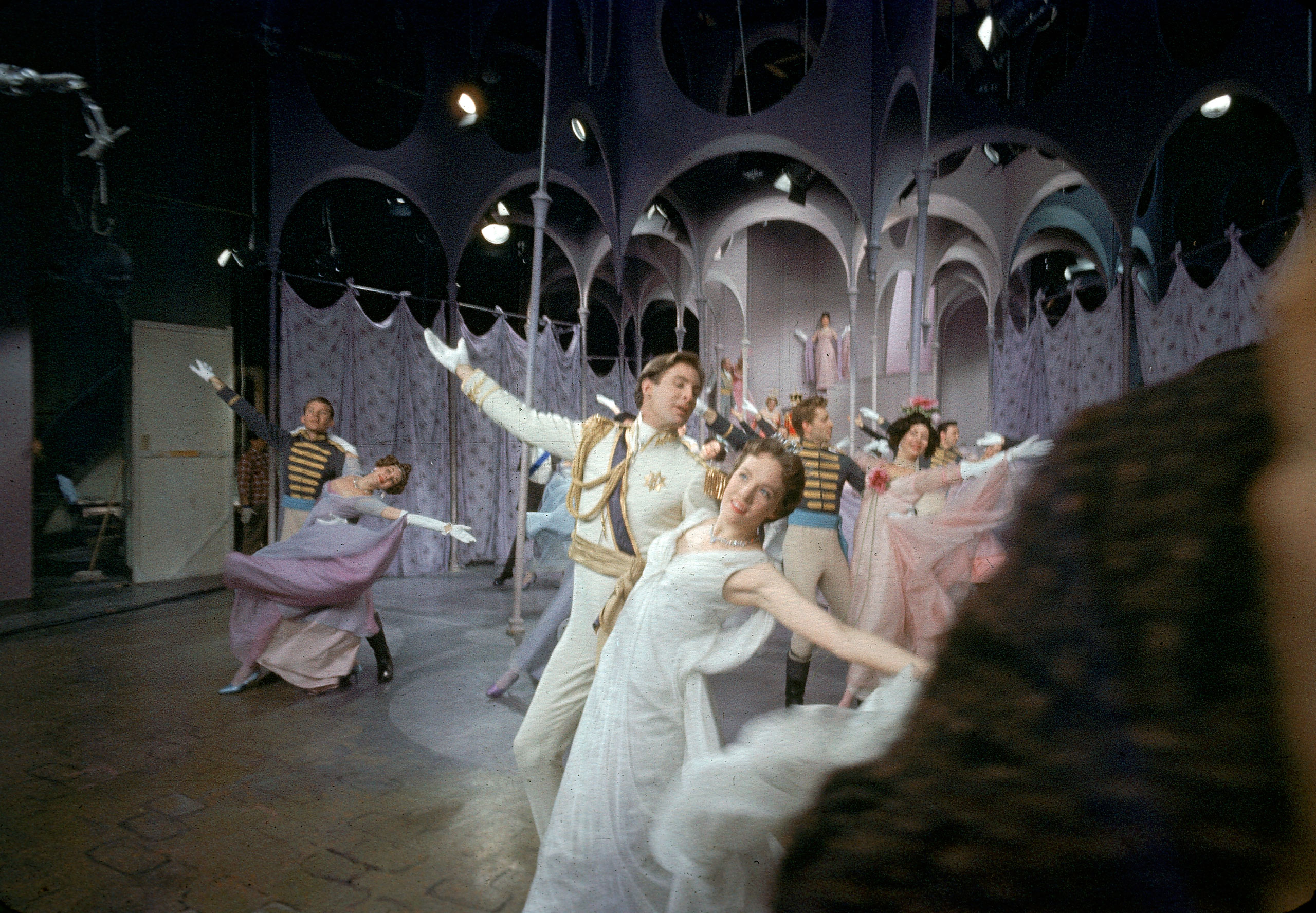 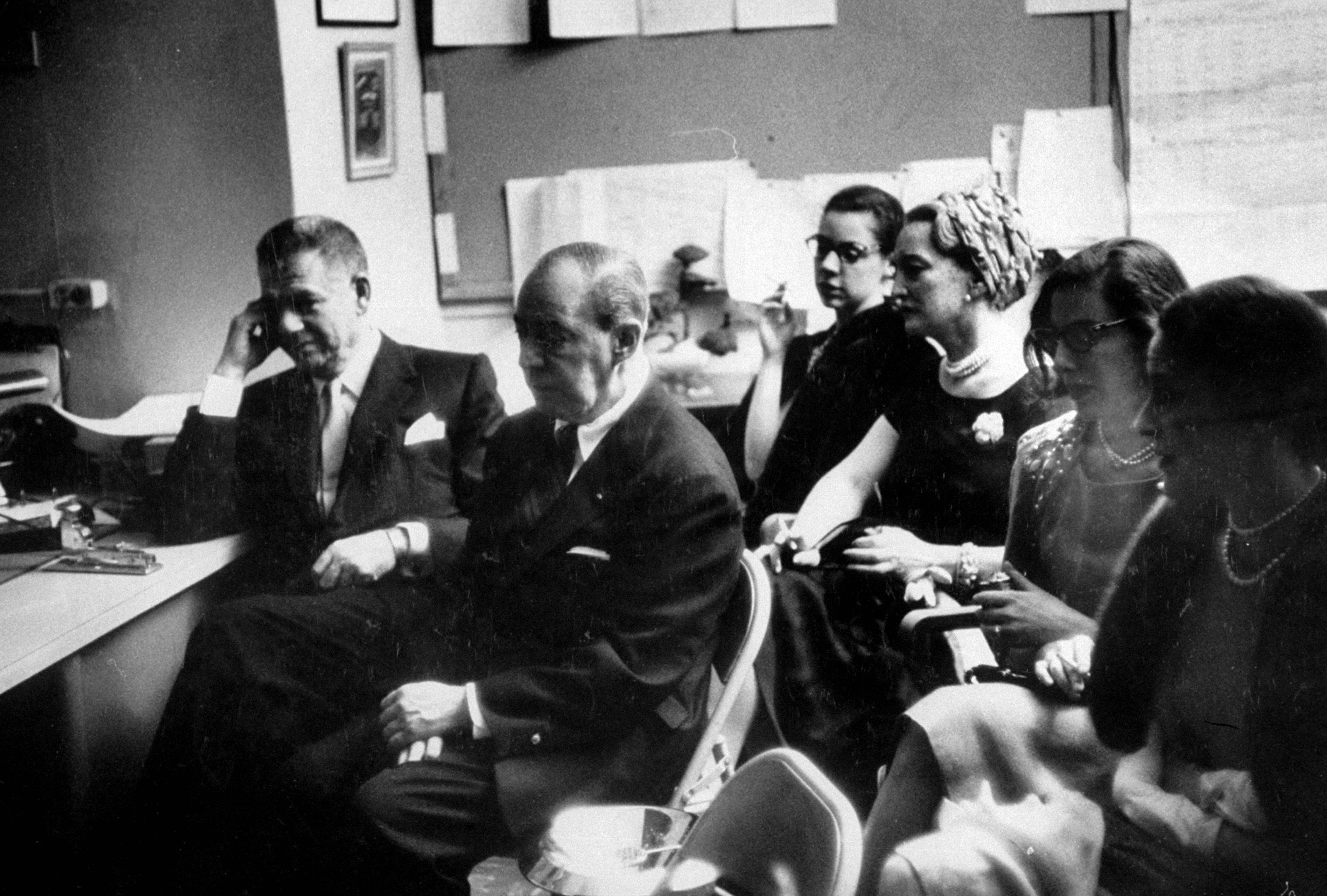 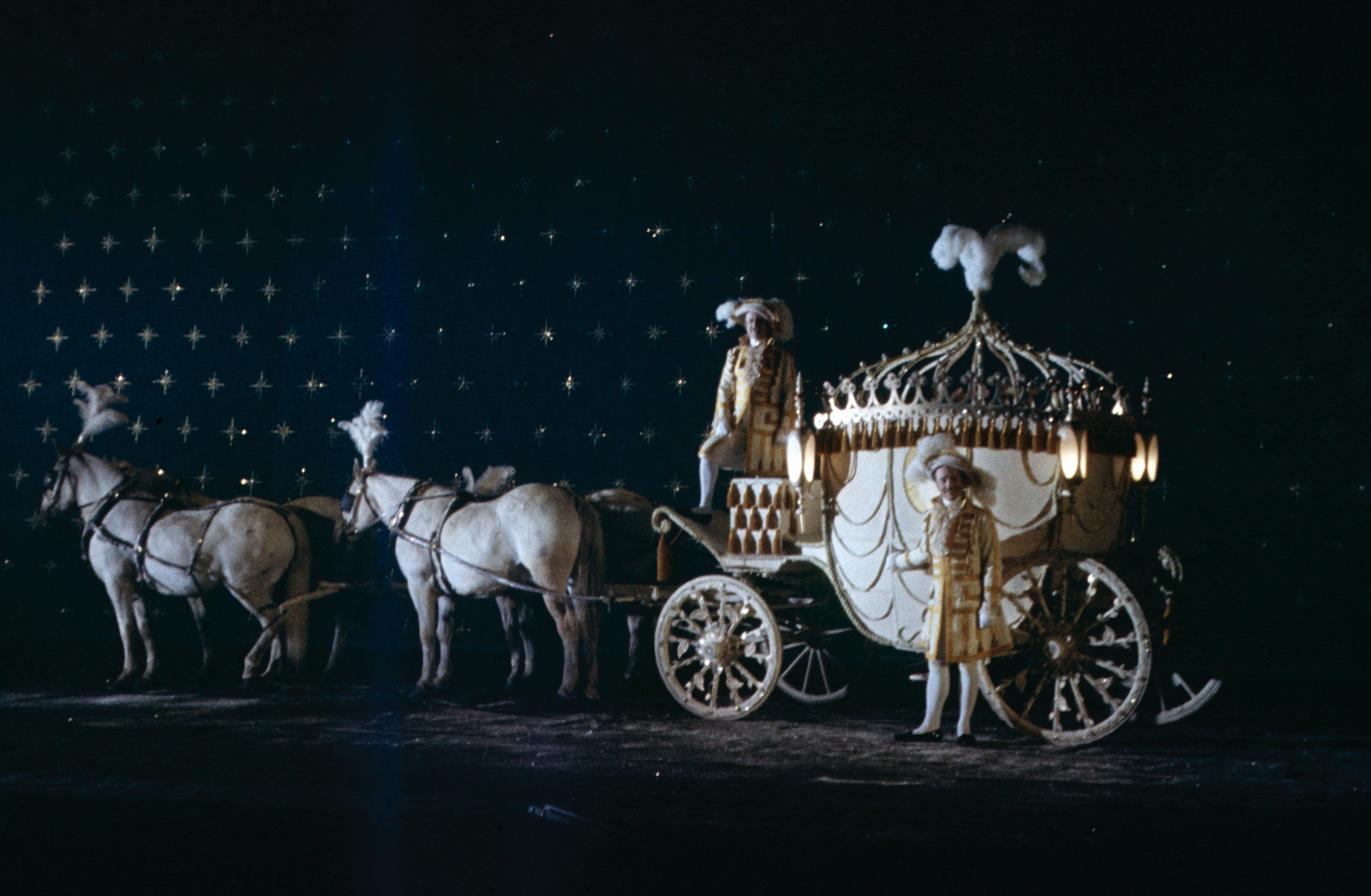 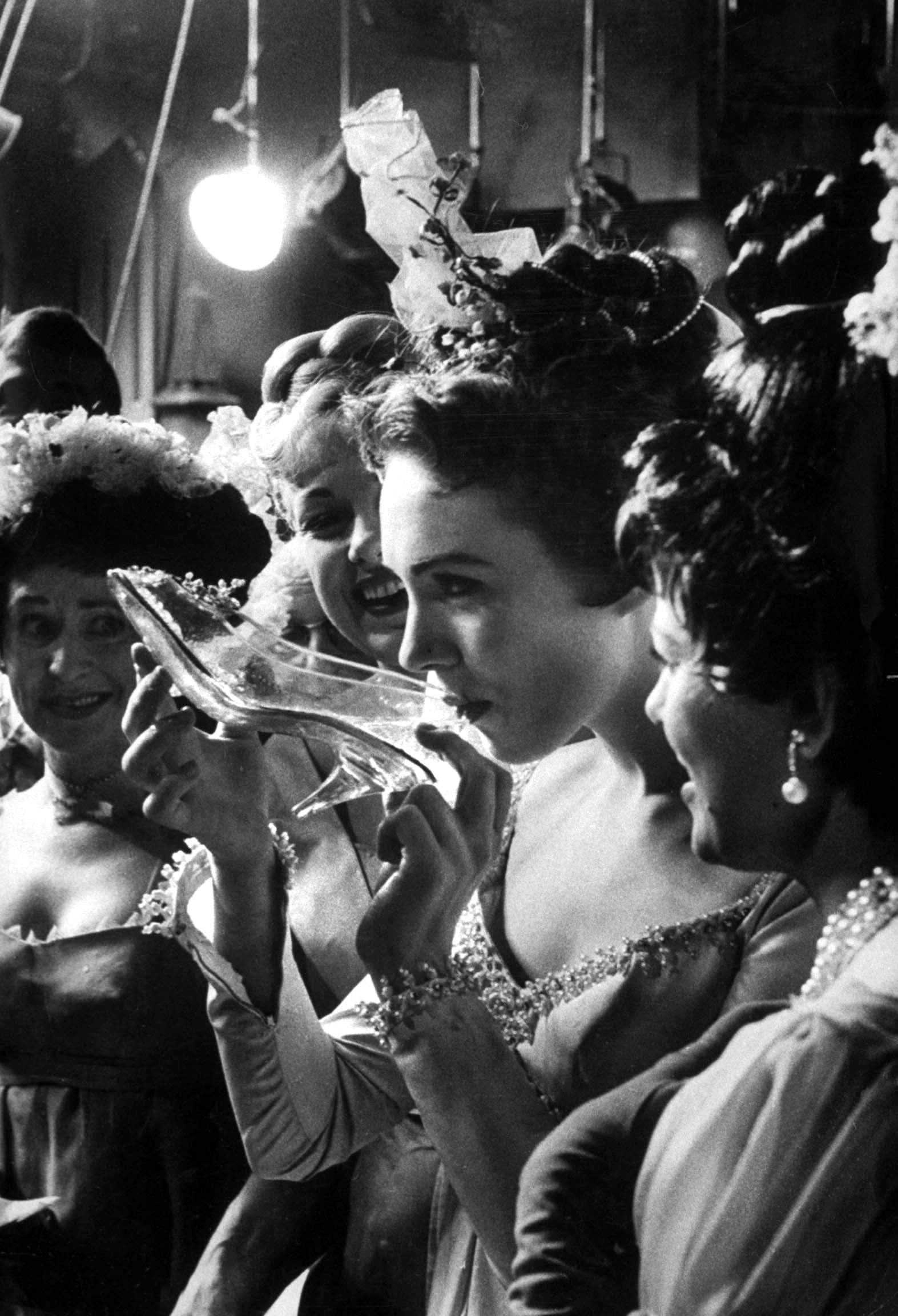 Caption from LIFE. After the show Julie Andrews drinks toast to the rest of the cast from her glass slipper
Gordon Parks—The LIFE Picture Collection/Getty Images
1 of 10
Advertisement

Having jettisoned extraneous plotlines and music, screenwriter Weitz had the space to address matters that can confound and horrify children on their first excursion with fairy tales: Where do wicked stepmothers come from? And why must so many Disney heroines be orphans? Because at the heart of the stories that the studio turned into its early run of great movies was the child’s terror of abandonment and betrayal. Parents who expected innocent movie magic when they took their little ones to Snow White and the Seven Dwarfs, Pinocchio, Dumbo and Bambi might have been as shocked as their kids at the atrocities on display: mothers slaughtered or carted off to a madhouse, children offered poisoned apples or turned into donkeys. That’s how Walt Disney taught moral lessons–by scaring the poop out of kids.

Even Frozen, the studio’s double-princess movie and worldwide smash, got rid of the King and Queen in a shipwreck. At least that was a clean killing. The greater betrayal is the abrupt replacement of loving parents by a vicious surrogate. That was the backstory of Snow White, with an implied death spree as lurid as that in Act V of Hamlet. But Snow White didn’t visualize the girl’s loss of her parents, as Weitz does here.

At first, Ella (played as a 10-year-old by Eloise Webb) has two beautiful, adoring parents. Mother (Hayley Atwell) soon succumbs to the sort of movie disease that deprives her of life but not luster, leaving the child with the dictum “Have courage and be kind.” Father (Ben Chaplin), hoping to give Ella a new mother and two girls her age besides, marries the widow Tremaine, then dies while on a business trip. In short order, we see that Tremaine is no lady; she spits out her stepdaughter’s name as a cruel, cackling curse.

Like Jolie in Maleficent, Blanchett gets top billing here. She earns it by radiating a hauteur that chills as it amuses; the performance is grand without being camp. The movie doesn’t rehabilitate Lady T., as Maleficent did for its sorceress. She is the prisoner of her personality, parrying Cinderella’s aghast “How could you?” with a vitriolic (and poignant) “How could I not?” Behind her sadism is the sad awareness that her stepchild has all the graces her daughters lack. Lady T.’s only good luck is finding an ally in the venal Grand Duke (Stellan Skarsgard), who is as adept at palace intrigue as she is at domestic iniquity. Perhaps these meanies should star in a sour sequel: Sinned-erella.

Cate the Blanch-ificent is well matched with James, who plays Lady Rose on Downton Abbey as a figure of whim and rebellion who flirts with a black jazzman and later marries a Jewish lord. With her blond hair framing subversive dark eyebrows, James creates a Cinderella both classic and modern, who is the sculptor of her own destiny. She needn’t wait for the royal ball to dazzle the Prince; she meets him as an equal, on horseback in the forest (neither knows the other’s identity), and persuades him to spare a stag he was hunting. He knows then he must marry the girl, who has been true to her mother’s last words: she is courageous and kind.

As capacious and well scrubbed as any of the floors the heroine is obliged to clean, this PG-rated treat approaches the old Disney magic in a ballroom dance of two strangers becoming lovers. It mixes romance and a measure of droll wit without ever evoking the simpy phrase rom-com. Doing it the old way has paid off for the studio: 65 years after a “classic” animated feature that missed the mark, Disney finally gets Cinderella right.