Passersby stop at the spot where opposition leader Boris Nemtsov was murdered.
Yuri Kozyrev—NOOR for TIME
By Simon Shuster/Moscow

On a windy night in early March, a small group of Russia’s leading opposition activists got together at a restaurant in Moscow to commiserate over the murder of their friend and mentor Boris Nemtsov and to consider the bleak outlook for the pro-democracy movement he had helped lead. At midnight it would be nine days since Nemtsov was shot dead near the Kremlin, and in the Russian Orthodox tradition, that meant his soul would start its ascent to heaven.

“We have to finish what he started,” said Ilya Yashin, another leader of the opposition movement, as he sat hunched over his tea. But the obstacles were visible all around. By chance, the hostess had seated the group beneath a placard that read, At this table sat V.V. Putin–the Russian President they oppose. Staring at it, Yashin mumbled, “You can’t escape this guy.”

Since Putin annexed the Ukrainian region of Crimea a year ago and in the process provoked a confrontation with the West, the President’s influence over Russian politics has never been greater–and his tolerance for dissent has never been lower. His rhetoric and policies have helped create an atmosphere of intimidation in Russia that has led dissidents to fear for their lives. Violent attacks against opposition activists in Moscow have grown more frequent in the past year, anti-Western hate speech is now a staple on state TV, and the President has set out to sideline the moderate forces in government.

The hostility toward those who criticize the Kremlin is perhaps more intense than at any other time since the fall of the Soviet Union. The assassination of Nemtsov on Feb. 27 drove that reality home, further intimidating those few Russians who publicly challenge Putin. Making life harder for them is the broad support the President enjoys, especially among the parts of the electorate that see him as a patriotic wartime leader.

In a speech in December, Putin said that within Russia’s opposition movement there are those “who are used as an instrument to push foreign interests,” taking a jab at the Western interlopers that Russians are now encouraged to see around every corner. Putin’s loaded language–he has even referred to the existence of a corps of “national traitors”–functions as a green light for an ongoing crackdown on dissent.

On Russian state TV, this campaign has been cast as part of a national revival–and it appears to be working. The President’s approval ratings have reached record highs of over 80%, while ill will toward the U.S. and its European allies has grown more widespread than at any other point in more than a quarter-century. Surveys conducted in January by the Levada Center, an independent Russian polling organization, found that 81% of respondents had negative feelings toward the U.S. and 71% toward the E.U. Only two years ago, in March 2013, antipathy toward both the U.S. and the E.U. was at about 25%.

“We now live against the background of the enemies projected onto our television screens,” says Lev Gudkov, director of the Levada Center. “This creates a kind of mass aggression, which the state can channel quite effectively.”

Even activists who focus on more narrow issues have felt the force of that aggression. Maria Baronova, a campaigner for the rights of political prisoners in Russia, says the political temperature has reached a kind of boiling point. “What used to cause arguments now provokes threats and violence,” she says. “This doesn’t feel like some spontaneous groundswell. It’s coming from the top.”

The cause of Russia’s deepening political hysteria is, above all, its military conflict with Ukraine. The quick and bloodless annexation of Crimea last spring exhilarated millions of Russians and the ruling elite. “For the first time in its recent history, Russia stopped watching from the sidelines and began to act,” says an official from the Russian Foreign Ministry, who spoke on condition of anonymity. “We started making moves.”

Russia’s subsequent moves against eastern Ukraine, however, have come at a higher cost. Moscow was forced to send regular troops to aid its proxy militias–all while denying that any invasion of Ukraine had occurred. Journalists and Western observers documented the presence of Russian troops on Ukraine’s battlefields and young Russian soldiers began coming home in coffins–even as Putin continued to deny that Russia was fighting a war at all.

Nemtsov had set out to expose this fabrication. The day before his murder, he burst into the office of his assistant, Olga Shorina, with news of a report he was planning to publish under the title “Putin and the War.” Concerned that the room was under surveillance, Nemtsov grabbed a sheet of paper and scrawled a message to Shorina: A group of Russian paratroopers had contacted him, claiming that 17 men from their base had been killed while fighting in Ukraine and that the state was refusing to compensate the soldiers’ families. “But so far they are afraid to talk,” Nemtsov wrote in the note, which Shorina showed to TIME about a week after the opposition leader’s death. “He was trying to convince them to go public,” she says of the paratroopers.

Nemtsov knew his plan was risky. A group of thugs had already attacked several journalists in August while they were trying to film the fresh graves of Russian paratroopers in the western region of Pskov, where they had been sent from Ukraine for burial. Later that month, a local lawmaker named Lev Shlosberg was severely beaten in Pskov while investigating the deployment of those troops. “The state needs to prevent society from learning the scale of the losses and considering the costs of this war,” he tells TIME.

Opinion polls suggest that Putin would risk a public backlash if he were to own up to those losses. As the conflict in eastern Ukraine has claimed more than 6,000 lives in total over the past year, the number of Russians who say they would support Putin in an all-out war with Ukraine has dropped to 44% as of February, down from 74% last spring, according to the Levada Center’s surveys.

Such data may have prompted the state to ramp up its propaganda war against Ukraine and the West, as it sought to galvanize the core of Putin loyalists who are prepared–even eager–for a drawn-out military confrontation. “There are many of these groups, half bandits, half nationalists, who support Putin, who like the aggression, who like the empire supposedly rising from its knees,” says Mikhail Kasyanov, who served as Russia’s Prime Minister from 2000 to 2004, during Putin’s first term as President, but went on to help Nemtsov in leading the opposition. “They are ready to tighten their belts,” he adds, “to kill if necessary, to settle scores.”

The political violence appears to have continued since Nemtsov’s murder. In the early hours of March 5, 36-year-old antiwar activist Alexei Semyonov was walking home in northern Moscow when two men came up behind him and hit him in the head with a baseball bat. A few days later, in the neurological-trauma ward of a Moscow hospital, Semyonov said he did not know who had attacked him, but he believed the beating was likely in retaliation for his wearing a ribbon in the national colors of Ukraine, yellow and blue.

To Semyonov the ribbon is a statement of support for another nation’s right to independence. To some people in Russia such symbols are the marks of a traitor. “That is the atmosphere we’re living in,” he said, the bandage around his head still stiff with blood. “It’s no longer about debate or even shouting. People are ready to kill each other now.” Police have made no arrests in the case.

But despite the risks, Ilya Yashin plans to finish the report that his mentor began compiling on Ukraine. “We have to expose the lies that Putin tells,” Yashin said at the restaurant, still sitting beneath the placard with the President’s name.

As his voice grew louder, the diners at the neighboring table began to stare and shift in their seats at such slanderous talk. For a moment it looked as if a fight might break out. But Yashin refused to lower his voice.

On March 1, little more than a day after Nemtsov’s murder, Russia’s liberal activists held a march in Moscow in his honor. The rally attracted some 50,000 people, a major turnout in Russia’s cowed political culture. They carried portraits of Nemtsov and banners reading, I am not afraid. But the mood belied those words, and the crowds quietly dispersed after walking the route agreed on with the authorities.

While the rally was front-page news in the West, the Kremlin-controlled media ensured that most Russians saw little of this rare outpouring of dissent. Early last year, Russia’s only independent news channel, TV Dozhd, was dropped by most cable providers and later evicted from its studios, forcing it to cut its staff by half as its audience shrank by about 80%. Thanks to a recent law, state regulators have been able to block websites without a court order, so a perusal of the news in Russia often means running into error messages: “Access to the requested resource has been blocked by the decision of public authorities.”

Russia’s most famous anticorruption activist, Alexei Navalny, was meanwhile given a suspended sentence of 3½ years in December after being convicted of embezzlement in a trial that human-rights groups have dismissed as a sham. On March 6, after Navalny finished one of his routine stints in jail, this time for handing out leaflets in the Moscow subway, he told reporters, “There will be no letup in our efforts. We will give up nothing.”

But neither will the Kremlin loyalists, whose invective seems to be getting only harsher. Hardly a week after Nemtsov’s murder, Evgeny Fyodorov, a prominent lawmaker in Putin’s political party, assembled a group of demonstrators outside the U.S. embassy in Moscow to condemn Nemtsov and his allies as puppets of Western influence.

“He is a direct communicator with the U.S.A.,” Fyodorov said, speaking with scorn as if Nemtsov were still alive. Then the few dozen demonstrators began a chant about Nemtsov and his fellow dissidents: “Purge! Purge! Purge!”

It was clear from the surprised faces of passersby that for many in Russia the word purge is still shocking; the Soviet purges sent millions of their countrymen to die in Siberia’s prison camps. But the spirit of those dark times–if not yet the purges Fyodorov demands–is creeping back into Russian life. 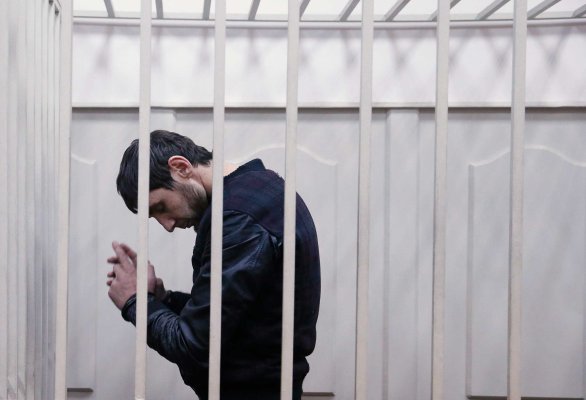