ESPN’s website saw fans fill out more than 11 million brackets for the 2014 men’s NCAA tournament, an all-time high and still just a chunk of the many millions entered in pools around the world. But only President Barack Obama, the nation’s basketball fan in chief, has the, um, privilege of filling out his bracket on TV and then having it dissected by a passel of reporters and the legions of other self-styled bracketologists.

So, how has Obama done? A review of his selections since he began in 2008 by FiveThirtyEight.com indicated that the President–despite his triumphs as an electoral underdog–tended to pick far fewer upsets than the average tournament contains. (Though his prediction rate on round-of-64 upsets has been well above average.) Obama showed no particular preference for states that voted for him, although he has a persistent love for the sometimes disappointing Tar Heels of North Carolina, the purple state Obama swung blue in 2008.

Despite his knowledge of the game, the President has picked the correct men’s champ only once in his seven tries (North Carolina in 2009). Consider it the presidential endorsement no candidate wants. 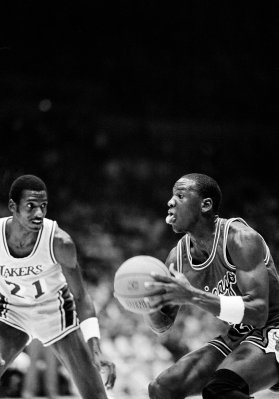 Michael Jordan's Sneakers from 1984 to Be Auctioned
Next Up: Editor's Pick