5 of the Most Influential Protests in History

Protestors watching members of their band making salt following the civil disobedience riots and demonstrations demanding the boycotting of British goods and the arrest of leader Mahatma Gandhi in Kapadwamj, India on May 6, 1930.
Popperfoto—Getty Images
By Sarah Begley

When Mohandas Gandhi began his famous Salt March 85 years ago today, on Mar. 12, 1930, he couldn’t have known the influence it would wield on the history of India and the world. Not only did it play a major role in India’s eventual freedom from British rule, but it also went on to inspire future protestors to incredible acts of civil disobedience.

In honor of the anniversary, we’ve rounded up five major protests that served as inspiration for future protestors, from ancient times to the modern day.

Under British rule, Indians were prohibited from collecting or selling salt—Britain had a monopoly on that staple product, and taxed it heavily. Gandhi assembled his supporters in 1930 to march 240 mi. from his ashram to the Arabian Sea to collect salt from the ocean. The crowd snowballed along the way; more than 60,000 Indians were arrested for breaking the salt law. It was an ideal method of protest, because collecting salt was a completely non-violent activity and involved a commodity that was truly important to Indians. The protest continued until Gandhi was granted bargaining rights at a negotiation in London. India didn’t see freedom until 1947, but the salt satyagraha (his brand of civil disobedience) established Gandhi as a force to be reckoned with and set a powerful precedent for future nonviolent protestors, including Martin Luther King Jr.

2. The March on Washington

By 1963, African Americans had been freed from slavery for a century yet continued to live lives burdened by inequality in every realm of society. The March on Washington for Jobs and Freedom was intended to push lawmakers to pass legislation that address these inequalities, and its organizers were so successful that more than 200,000 supporters turned out for the action—double their estimate. Martin Luther King Jr. delivered perhaps the most famous speech in American history, his “I Have a Dream” address, at the base of the Lincoln Memorial, and the leaders met with President Kennedy afterwards to discuss their goals. The march was credited with helping build support to pass the Civil Rights Act of 1964 and the Voting Rights Act of 1965, and its messages of the hard work to build equality are echoed today from the Ferguson protests to President Obama’s recent speech in Selma, Ala.

Though Aristophane’s comedy was fictional, it held real-life lessons for future generations: In the 5th-century-BC play, the protagonist organizes Greek women to agree not to have sex with their husbands and lovers until they can forge peace and end the Peloponnesian War. Silly as the concept may sound, sex strikes have been used as peacekeeping measures in modern societies from Colombia to the Philippines. Perhaps most notably, women in Liberia included a sex strike in their Women of Liberia Mass Action for Peace that successfully ended the 13-year Second Liberian Civil War—and got a female president, Ellen Johnson Sirleaf, elected. Sirleaf and organizer Leymah Gbowee won the Nobel Peace Prize for their work.

4. The Self-Immolation of Thich Quang Duc

The Vietnamese Buddhist monk did not invent the act of burning oneself to death, but his self-immolation on the street in Saigon in 1963 to protest the treatment of Buddhists in South Vietnam shocked the world and created a horrific new genre of political protest. Like many forms of suicide, self-immolation proved contagious: other Vietnamese monks followed suit, as did an American in Washington, D.C. to protest the war. Tunisian fruit vendor Mohamed Bouazizi is credited with sparking the Arab Spring uprising in 2010 with his self-immolation to protest his treatment by the oppressive government, and more than 100 Tibetans have self-immolated in the last five years in protest of Chinese rule.

5. Take Back the Night

Since the 1970s, events under the Take Back the Night umbrella have protested violence against women in the form of marches and rallies around the world, often in direct response to specific murders of women. The movement set a precedent for future actions concerned with female safety and sexuality, like SlutWalk, a march that began in 2011 to oppose a statement by a Toronto Police Constable that “women should avoid dressing like sluts in order not to be victimized.” More recently, Columbia student Emma Sulkowicz has protested her university’s decision to allow her alleged rapist to remain on campus with her project “Carry that Weight,” in which she hauls her dorm mattress everywhere she goes.

Read TIME’s definitive ranking of the top 10 most influential protests of all time here. 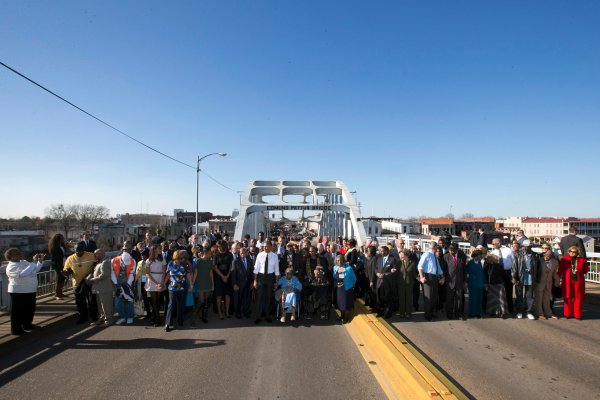 Congress Takes a Trip to Selma
Next Up: Editor's Pick