As the pop star was preparing for her show-stopping moment at the Oscars, she wanted to go over her plans for the The Sound of Music tribute with the woman who made the songs famous.

“She called me about 10 days before and she said, ‘I just want to talk to you and make sure I don’t offend. That what I’m doing is okay with you,’ ” Andrews tells PEOPLE. “It was very generous of her.”

“She said she’d been working so hard and she was singing everything in my keys. I said, ‘Why? They’re very high, even for me.’ And she said, ‘Because I wanted to honor you, so I did them in your keys.’ That seemed like going one step beyond any place she needed to go.”

Twitter went gaga over Gaga, but what did Andrews think of the pop star’s performance? “She hit it out of the ballpark,” she says. “And then she was gracious enough to hand it to me. So that’s a really wonderful thing to do too I think.”

“As they say in Hollywood jargon, ‘She rates tall in my book,’ ” Andrews adds.

For those seeking the original Andrews favorite, a special 50th anniversary DVD was released Monday, and a limited theatrical run is slated for next month. 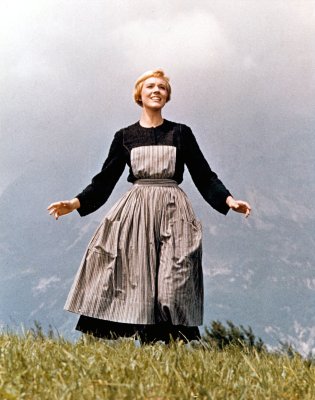 Julie Andrews on The Sound of Music at 50 — And That NBC Remake
Next Up: Editor's Pick