Julie Andrews in the movie "The Sound Of Music."
Michael Ochs Archives—Getty Images
By Sarah Begley

Fifty years after the release of The Sound of Music, the movie is still one of America’s favorite things — and Julie Andrews isn’t complaining. The star of the classic musical has been celebrating with a 50th anniversary edition, out now, and will even appear in an ABC special next Wednesday with Diane Sawyer, The Untold Story of The Sound of Music. TIME caught up with Andrews to discuss the movie, her thoughts on Broadway, and the 2013 live show of the musical broadcast on NBC:

TIME: Congratulations on the 50th anniversary.

Andrews: I’m the lucky one! I never anticipated that 50 years after the film was released, I’d be sitting here. It’s brought me many gifts and many friends, truthfully.

What’s your favorite song from the musical?

My personal favorite is one that I didn’t sing, which is “Edelweiss.” And that’s a beautiful, beautiful song. Beautifully constructed. It fools you with its simplicity, but it’s in fact a glorious song. In fact I have sung it subsequently many times in concert, and loved doing it. Because it’s about anyone’s homeland, really, it’s not just about Salzburg or Austria.

Do people ever give you gifts related to “My Favorite Things”? Copper kettles, or…

I do get a lot of gifts. I get a lot of things to sign, too. People do collect the memorabilia. Between Poppins and The Sound of Music, there were beautiful plates that they made, and I’ve signed a lot of them. A lot of the dolls. And they do give me gifts, especially if I go on tour to Japan or something like that, they really shower you with gifts after the show. Mostly for my kids. It’s nice!

You’ve recently made two documentaries about the movie, one for the DVD and now one for ABC. How did they come about?

Last summer I made a new extra footage hour for the DVD, sort of added bonus footage. So it turned out to be an hour long. I went back to Salzburg, and Diane came out and did her own hour of shooting with me, and made a very different kind of special documentary. That’s being aired next Wednesday.

What can people expect from it?

We went to a lot of the places where I had originally filmed. I think the highlight of the trip will be that we went back to the original von Trapp villa, which was not used in the movie — we created our own villa, because the original villa was somewhat in the suburbs and not as pretty or appropriate for the film. It was very interesting to see where the children had grown up, and the villa from whence they escaped.

Yes! I caught a little bit of it. I didn’t see it originally but then they repeated it, and I did see some of that, and it was fine! Everybody thinks that I would be uptight about it, but after 50 years everybody sings it all over the country anyway, high school productions and God knows what. Everyone should have a crack at it. Because it’s good!

Speaking of roles that you’ve done before, there’s a new Cinderella coming out on Friday.

I heard, and I hear it’s great. And the young lady that’s Cinderella [Lily James] is such a talented lady. She’s in the Downton Abbey series and is beautiful to watch. I’m so pleased, it was a smart choice.

If NBC was to do some of the others musicals you starred in, like My Fair Lady or Camelot, who should they cast?

My God, I don’t know! I’m sure there’s a lot of very, very good young Broadway people that would be phenomenal. Broadway has an enormous pool of talent, and they’re just not writing as many musicals. They’re writing more than they used to, but there’s still not enough for my money. And Camelot, God knows, by the time they get around to it, there’ll be somebody just perfect for it.

How do you think Broadway has changed since you were in those shows?

It’s much more expensive than it used to be. You don’t often see very big orchestras, which was part of the joy of a good musical. But they get very creative, and they use electronic instruments to enhance, which you can do with electric pianos and things like that.

The talent’s there, but getting them on and getting them into an appropriate theater are two separate, huge issues.

Have you seen any new musicals recently that you love?

I want to see Beautiful and The Book of Mormon. And there are so many others that I unfortunately never get enough time to see, because I travel a lot. But if they continue, I’ll get around to it.

Do you think you’ll write a follow-up memoir to your first (Home: A Memoir of My Early Years, 2008)?

I’m thinking about it. I really am. And I’d like to, because the second part will be so full of memories, and hopefully photographs, and some of the loveliest things that have occurred and happened to me in my career. I’m thinking about doing it and I might just. It’ll take a while. 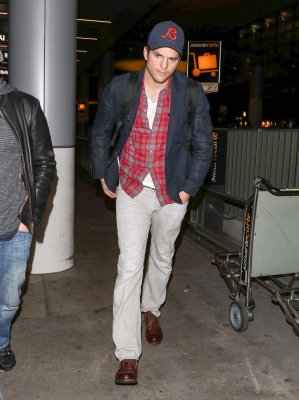 Ashton Kutcher Will Give You a Shout-Out If You Find a Men's Bathroom With a Diaper Changing Station
Next Up: Editor's Pick