James says the Kenneth Branagh-directed feature offers a new kind of Cinderella, one with more bravery and strength, plus a better message for young girls. TIME caught up with her before the movie’s Friday release to talk about her Prince Charming (Game of Thrones’ Richard Madden), her ball gown and the next steps for her career.

TIME: I heard that hundreds of actresses tried out for the part of Cinderella. What was the audition process like?

James: Very long and very painful. I originally went in to play Anastasia, one of the step-sisters, and I was really into it. I remember practicing the night before and I put on my most garish pink-orange tie-dye jumper. I was really up for playing a character where you didn’t have to worry about being pretty, and you could just be more quirky and comical. But then when I was there, the casting director said, “You should just read for Ella while you’re here,” and I did. And it just felt right. In the breakdown of the character, Kenneth said she had a generous spirit. I met Ken, and then I did screen tests—the whole thing took a few months, actually, until finding out. And in the screen test, in one of them, Ken played Prince Charming, which was so cool—he’s a really good Prince Charming.

What scene did you read with him?

The scene on the horseback and also another scene that didn’t end up in the film. I even did a scene in the kitchen, and they built this entire kitchen out of pine wood, kind of like the one in the movie—not as detailed and exquisite, but I had to cook, and there was boiling water, and it all worked, and there was an oven, and there were mice that I spoke to, and I couldn’t figure out if I was more scared of pretending to like mice or pretending to be able to cook.

In the real shooting you didn’t have mice to talk to, right? They were CGI.

No, I had little squidgy soft toys, or I’d even have tennis balls, and the sound guys would make weird squeaking sounds at me in reply. I felt like I was losing my mind.

It looked like you had great chemistry with Richard Madden, your Prince Charming, on the red carpet at the film premiere. Did you become close on the set?

We did. He was cool. Because we both were entering this world together, and for both of us it was our first big film, we bonded on that. He’s a really good man—he really was a real support—and also we just had fun right from the start. We became like mates. We have a similar sense of humor, I think.

Cate Blanchett played your stepmother and Helena Bonham Carter played your fairy godmother, too. How was it working with them?

To have scenes with actors like that makes you way better. All you have to do is respond because their characters are so deep and layered and colorful and rich, so in a way you just have to enter into their moment and share the moment, and when you look into their eyes, they’re telling the truth. It was the most unique acting experience I’ve had. And Helena is so funny. Those scenes were such a hoot.

She must not have been on set for too many days, since she’s mainly just in the transformation scene.

I was so sad when she left. Actually, we did these night shoots because they built everything for real—my whole garden and the house, everything was real, in the back lot of Pinewood [Studios, in London] in the forest. So we were shooting from seven in the evening til six in the morning, and it was freezing cold. We had hot water bottles and coffees, just trying to get through. It became like this parallel universe that we existed in together. We had these ridiculously gigantic skirts to navigate. Somehow, because she was there, we had a great time. She’s so spectacular—she just sort of improvises [in that scene].

Oh, really? Some of it was unscripted?

Yeah, loads of it. She came up with this idea that the Fairy Godmother perhaps isn’t actually that good at magic, and she’s a bit out of practice. So you know, all the stuff is like, “What have you got? Have you got a barrow? A cumquat? A melon?” She would try new vegetables every time, and I would genuinely be like, “I don’t know what that is.” And Ken’s great facilitating all that. He lets you go with the moment, and he’s so full of life. He directs with such heart. He really inspired all that sort of energy. There’s a lot of freedom.

What about all those period costumes? They seem a little less free and more constricting. What are the best and worst parts about wearing those dresses and corsets?

The best, which outweighs everything else, was in that blue gown—I felt completely transformed. And that’s what fairy tales are all about: transformation. When I put that dress on, I felt like I could be a princess. But then I’m glad that it only lasted a night! Or like, a movie-magic night. It was just so big, so heavy. With corsets, it’s interesting when you put them on, realizing that’s what women actually wore—that’s what they wore every day, and they’re just so constricting. I’m not surprised they ditched those corsets! In the blue dress it was particularly tight. On the one hand, it helps in the way you stand and the way you move, but on the other hand, it takes your breath right up into your chest. When I was trying to dance, I didn’t have the capacity to breathe to support the physicality, and so I had to keep taking breaks and loosening the corset. But as I said, it was worth it.

You also wore a pretty remarkable dress for the wedding scene in Downton Abbey, which we in the U.S. have only recently seen. Will we see Lady Rose again in season 6 even though she left for America at the end of season 5?

I hope so. I really hope so. It’s sort of down to what Julian writes—it’s down to timing—but I’m pretty certain that that’s not the end of Rose.

Americans, at least, have come to know you primarily through period pieces like Downton, and Cinderella kind of feels like a period piece. Then you have Pride and Prejudice and Zombies and War and Peace coming up. Is that a space you especially want to work in, or are you eager to take on more contemporary roles?

I definitely want to do some contemporary stuff now. To be honest, when I was growing up—I think it’s because of Kate Winslet and Titanic—I always wanted to do period. I grew up always wanting that, so I feel so happy that I’ve done a lot, but I’m definitely keen to challenge myself.

A lot of times when people talk about Disney princesses, they’re concerned about what the message will be for little girls. What do you want children to take away from this version?

The message in the film is quite clear, and it’s that if you have courage, be kind, then all will be well—that your strength can come from within. Oftentimes when they re-do the fairy tales, the princesses suddenly have swords and armor, that’s where their strength comes from—which is great, but with this one, we wanted to show that there are different kinds of strength. Any kid in the world can draw from strengths within—we all have the potential with that. She manages to find joy in life even though she’s having quite a bleak time and talking to the mice, imagining and dreaming. What’s inside is what really matters. At the end of the film we say, “This is the greatest risk we’ll ever take: to be seen as we truly are.” The reason the prince falls in love with Ella is because she’s such a strong, beautiful girl from the inside—she challenges him and they enrich each other. That’s not a very quick message. It may be the most long-winded answer ever. But I think there’s lots of little messages in the film that are really strong and empowering.

I read that you didn’t actually wear the glass slippers in the film.

They didn’t fit me. They fit the wrong girl. They didn’t fit any human foot! They’re Swarovski crystals, so they were on set and I would hold them and be terrified, whereas Richard Madden would be holding it and carrying away and moving around, gesticulating, and these guys in white gloves would be terrified. My friend’s daughter came to visit on set, and I let her hold the slipper, and her face—it was one of the most magical moments. Her eyes just lit up and the shoes were reflected in her eyes. It was amazing.

Read next: This Honest Trailer for Cinderella Reminds Us How Sexist the Original Story Really Is 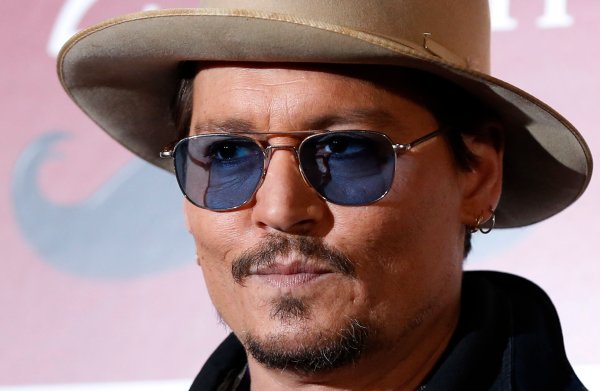 Johnny Depp Injures Hand on Location in Australia
Next Up: Editor's Pick