President Obama’s decision to reopen relations with Cuba is having an interesting side effect: it’s helping isolate Latin America’s other hard-line leftist regime in Venezuela.

On Monday, Obama signed an Executive Order freezing the U.S. assets of seven midlevel Venezuelan officials over their handling of protests last year. In years past, many Latin American officials would have viewed it as more of the same from America, whose policy of punishing Cuba with sanctions was widely seen as anachronistic at best.

Now, thanks to the ongoing rapprochement between the U.S. and Cuba, Washington is less easy to ignore, especially on matters of morality and fair play. So it was that Monday’s executive order naming Venezuelan security officials turned out to be aiming what U.S. officials called “a spotlight” onto a government that other Latin American nations are also watching with concern.

“Until very recently, most countries in the region were reluctant to say anything about Venezuela,” says Daniel Wilkinson, managing director of the Americas division at Human Rights Watch. “If this is just U.S. sanctions, and the U.S. is doing it on its own, then it’s much easier for Venezuela to play the victim card. That’s why it’s really important for the U.S. government to be working with other democratic governments in the region to make this more of a collective.”

On Friday, the President of Colombia publicly despaired over Venezuela, even though he has staked his legacy on peace talks being hosted by Maduro’s strongest ally in the region, Havana. “It interests, hurts and worries us, all what’s going on in Venezuela,” President Manuel Santos said in a speech.

What’s going on in Venezuela is a mess. The collapse in oil prices last autumn sent the economy into free fall, 95% of its export revenue flowing from petroleum sales. President Nicolás Maduro, who was elected after his mentor Hugo Chávez died in office two years ago, is struggling to remain in control amid economic chaos and shortages of heavily subsidized staples. The cascade of indignities includes a shortage of necessaries that led the government to take over a toilet-paper factory — and the Prime Minister of Trinidad and Tobago to offer an oil-for-toilet-tissue deal.

Maduro, in what economists call a strategy of diversion, blames the U.S. for waging “economic war” on the country. He has ordered most U.S. diplomats out of the country — the ambassador was expelled five years ago — and abruptly required visiting Americans to obtain visas. None of which was lost on the White House, which took pains to emphasize that the new sanctions were aimed at individual officials, and not “the people or the economy of Venezuela.”

“The point of these sanctions or policies is really to shine a light,” a senior Obama Administration official said Monday, speaking in a not-for-attribution conference call shortly after the Executive Order was released. Obama’s actions went beyond the law passed by Congress, the Venezuela Defense of Human Rights and Civil Society Act of 2014, to draw attention to the abuses of Venezuelan officials who authorized surveillance of opposition leaders, “hundreds of forced entries and extrajudicial detentions,” and the use of excessive force, including sexual assault and using live ammunition, against protesters and journalists. Prosecutor Katherine Nayarith Haringhton Padron is named for charging a former lawmaker and the mayor of Caracas with conspiracy “based on implausible — and in some cases fabricated — information.”

“You go back a year ago, when there was this wave or protests that was met with very aggressive and violent response by the government,” says Wilkinson, who was expelled by Venezuelan authorities in 2008. “This was a sustained process over more than a month of nonviolent protesters being severely beaten, in some cases tortured, being shot point-blank range with rubber pellets … Protesters would be held for two days without access to a lawyer, then summoned to a hearing in the middle of the night, with a lawyer having five minutes to prepare.”

Whether the sanctions will work remains to be seen. Under the Executive Order, U.S. financial institutions have 10 days to report any holdings controlled by the seven officials, and longer still to see if freezing them alters the behavior in what Transparency International calls the most corrupt country in the western hemisphere. But in diplomatic terms, the effects might be felt sooner. Before Obama and Cuban President Raúl Castro announced their plans to reconcile, the Summit of the Americas, set to convene April 10 in Panama City, was sizing up as an awkward occasion for the U.S. leader. Instead, it may be Maduro who draws the sideways glances. 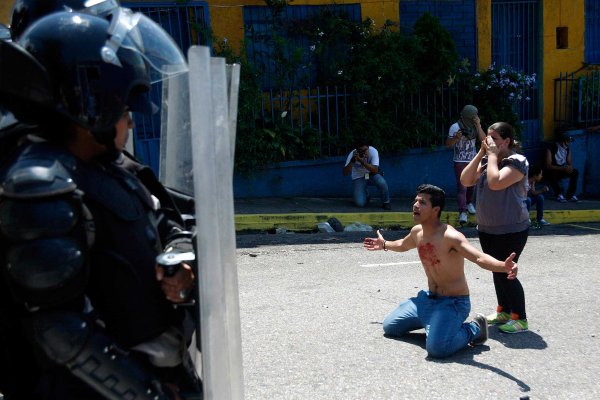 Venezuela Is Slowly Coming Apart—and President Nicolas Maduro May Pay the Price
Next Up: Editor's Pick