Apple on Monday unveiled a svelte new addition to its lineup of laptops: the 12-inch MacBook. At a press briefing in San Francisco, the electronics giant introduced the long-anticipated update to its MacBook line.

CEO Tim Cook touted the device’s light weight and thin enclosure. It weighs 2 lbs. and, at its thickest point, the MacBook is 13.1 millimeters thick, 24% thinner than the 11-inch MacBook Air. It also features the company’s ultra-high-resolution Retina display. And unlike previous models, the device will be available in multiple colors, silver, grey and gold. Introducing the computer, Cook joked with the audience, “It is unbelievable! Can you even see it?”

Marketing chief Phil Schiller said the device represents the company’s vision of the future for notebooks. Rather than a multitude of ports, the device will have one connector, dubbed USB-C, to provide power, video output, and device connectivity. Schiller said the standard was being adopted across the computer industry. On stage, Schiller called it “the world’s most energy efficient laptop.”

The base model MacBook comes with a 1.1 Ghz dual-core Intel Core M processor, Intel HD 3500 graphics, 8GB of memory, and a 256GB SSD hard drive. It begins at $1,299 and will be available next month. The company also announced several moderate upgrades to its other laptops.

CEO Cook said during the presentation that while the notebook market shrank 2% last year, Apple’s MacBook business grew 21% during the same period. Ultra-light notebooks like the one Apple introduced today have been the lone bright spot as personal computer sales have sputtered over the past few years. According to researcher Gartner, sales of so-called ultra mobile premium computers like the new MacBook are expected to grow to 85 million annually, up from 39 million last year. 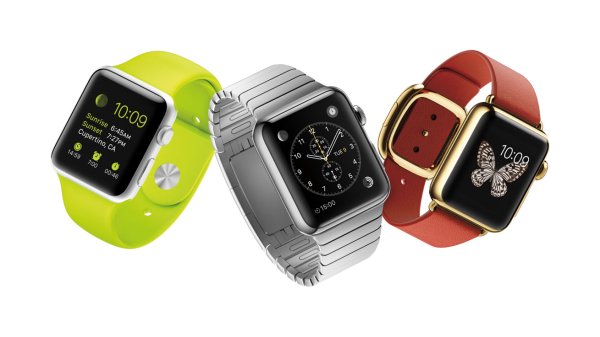 Everything We Know About the Apple Watch So Far
Next Up: Editor's Pick