Boko Haram Under Attack by 4 Armies Led by Nigeria

Chadian troops participate along with Nigerian special forces in an exercise in Mao, Chad on March 7, 2015.
Jerome Delay&mdash;AP
By Aryn Baker

With army trucks bristling with weapons, and soldiers boasting that they would catch Boko Haram militant leader Abubakar Shekau alive, military forces from Niger and Chad crossed into northeastern Nigeria on Monday to open new fronts in a war against an insurgent group that has wreaked havoc in the region for several years. Residents from both Nigeria and Niger described door-rattling booms of fighter-jet missiles and the stutter of artillery fire as troops zeroed in on Boko Haram enclaves near the border. Nigerian army spokesman Colonel Sami Usman Kukasheka crowed to BBC World that the joint effort “will definitely see to the end of the insurgency in Nigeria.” What he didn’t say is that it is unlikely to be anytime soon.

Analysts estimate that Boko Haram controls some 20,000 sq km in Nigeria’s northeast, forming a rough square bordered by Niger, Chad and Cameroon. Though Boko Haram originates in Nigeria, much of its strength comes from its ability to cross borders in pursuit of sanctuary. No longer. The multipronged effort, with troops massing on all three sides, appears designed to encircle the group, cutting off supply lines and escape routes, says J. Peter Pham, a Nigeria expert and director of the Atlantic Council’s Africa Center. It’s not the first time the four countries have worked together to tackle Boko Haram, but this offensive, says Pham, may prove to be the most effective yet. With forces from Niger advancing into Nigeria for the first time, from two different locations on the northwestern border, and with Chadian and Cameroonian forces holding the frontier to the northeast and southeast, Boko Haram fighters have nowhere to go. “The noose is tightening around Abubakar Shekau, and if one looks at the map, it is clear that the ultimate goal is to isolate Boko Haram from” cross-border sanctuaries, says Pham.

With Chadian air support and Cameroonian military backup, Nigeria’s army has already recaptured two dozen towns from Boko Haram, a group that gained international notoriety when it kidnapped nearly 300 schoolgirls from a boarding school in Chibok in April. Still, it is unlikely that Nigeria will be able to fulfill the government’s promise that all territory will be liberated before general elections scheduled for March 28. Boko Haram flourishes in the dense jungles of the northeast, and its brutal campaign of kidnappings, executions and forced conscription ensures local support, even if out of duress. The Nigerian army doesn’t have the troop numbers or the equipment for a full-fledged territorial takeover, but the government cannot afford to let foreign forces lead the fight, either. One of the biggest issues in the upcoming election is security, and incumbent President Goodluck Jonathan can’t risk looking so weak that he requires outsiders to secure the country. “It is politically and psychologically important for the government that Nigerian territory is not seen as being liberated by foreign troops,” notes Pham. Instead the neighbors will play a supporting role.

Nigeria’s military spokesman cites Shekau’s pledge of allegiance to the Islamic State of Iraq and Greater Syria (ISIS) on Saturday as proof that the regional fight against the group is already having an impact. Liking the pledge to the desperate pleas of a “drowning man,” Colonel Kukasheka told the BBC World Service, “There is no surprise that he is craving for support from fellow terrorists across the world.”

Though Shekau is far from drowning, there may be some truth to the boast. Boko Haram and ISIS have been “circling and courting for a long time,” says Pham, noting Boko Haram’s adoption of ISIS’s black flag and anthem in the fall, and ISIS’s citation of Boko Haram’s Chibok kidnappings as precedence for its own kidnapping of Yezidi women and girls in Iraq. But the fact that both groups have been losing territory in recent weeks means they could use a little bit of a propaganda boost. “It was happening already, but the propaganda needs of both groups expedited the process,” says Pham. “For ISIS to acquire a new province, so to speak, is propaganda that benefits them both.”

That propaganda could quickly turn into a black eye for ISIS if Boko Haram does end up being wiped out through the efforts of the multinational force. ISIS has not yet responded to Shekau’s pledge, and given the current operation, leader Abu Bakr al-Baghdadi may want to take a wait-and-see approach before he commits to a vulnerable ally. But Boko Haram, like ISIS, has two aspects: a military force that can be defeated, and a terrorist reach that is all but impossible to contain. On the same day the multinational forces started rolling into Nigeria, the provincial capital of Maiduguri was hit four times by suicide bombers. That’s something sure to make ISIS proud. 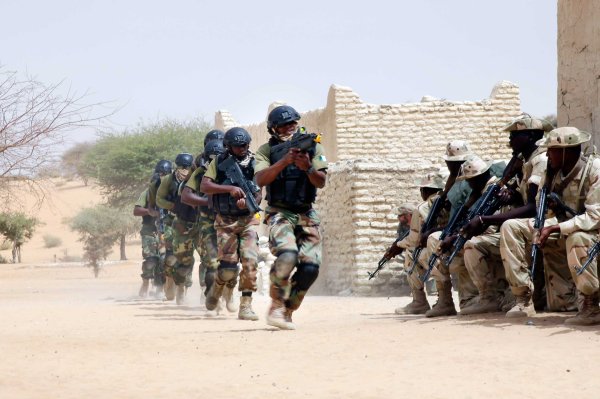