Nigerian special forces run past Chadian troops in a hostage rescue exercise at the end of the Flintlock exercise in Mao, Chad on March 7, 2015.
Jerome Delay—AP
By Helen Regan

Troops from Chad and Niger launched a joint military offensive against Islamist militants Boko Haram in northeastern Nigeria on Sunday.

Neighboring Chad, Niger and Cameroon had already been cooperating with Nigeria on their own soil after Boko Haram launched several cross-border attacks, reports Reuters, but Sunday’s operation was Niger’s first major push into Nigerian territory to fight the militants.

“We can confirm that Chadian and Nigerien forces launched an offensive this morning from Niger. The offensive is underway,” said Colonel Azem Bermandoa, spokesman for Chad’s army.

The fresh offensive comes a day after Boko Haram fighters were blamed for a series of bomb attacks in the Borno state capital Maiduguri, killing at least 50 people.

Nigeria’s government has called for greater international help to defeat the insurgency. On Friday, the African Union set up a regional force of some 10,000 troops to join the fight against the extremist group.

Boko Haram seeks to establish an Islamic caliphate in northeastern Nigeria. On Saturday, they pledged allegiance to extremist group the Islamic State of Iraq and Greater Syria (ISIS.) 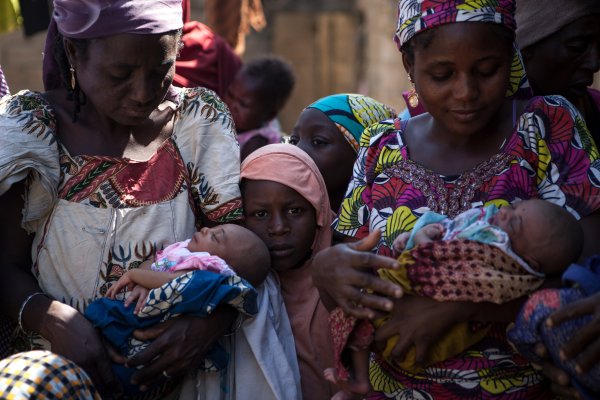 Nigeria's Kidnapped Girls Forgotten Ahead of Election Day
Next Up: Editor's Pick