In a reversal of plans, Kevin McCarthy, the second-ranking Republican in the House of Representatives, will join around 100 members of Congress who are gathering in Alabama this weekend to commemorate the 50th anniversary of “Bloody Sunday.” Before McCarthy’s announcement, no members of the Republican leadership in Congress had been scheduled to attend the event.

Rep. McCarthy, the House Majority Leader, changed his plans late Friday, after a day of widespread media coverage of the lack of Republican leadership in the congressional delegation.

President Obama is scheduled to speak Saturday at the Edmund Pettus Bridge in Selma, Ala., to honor the 50th anniversary of the Civil Rights march that led to the passage of the Voting Rights Act in 1965. House Minority Leader Nancy Pelosi (D-CA,) Senator Elizabeth Warren (D-MA,) Senator Rob Portman (R-OH) and Senator Tim Scott (R-SC) are among the bipartisan coalition led by Rep. John Lewis (D-GA) in his annual Civil Rights pilgrimage with the Faith & Politics Institute. Lewis was one of the student protestors on the bridge in 1965, and was in the crowd that was attacked by police for demanding voting rights.

In remarks to members of Congress traveling with Lewis Friday evening, Portman recalled how Lewis convinced him to attend the event at the White House Christmas Party last year. Pelosi told the audience that the event was “not even bipartisan– it’s nonpartisan.”

As many as 100,000 people are expected to convene in Selma Saturday to hear the President speak. 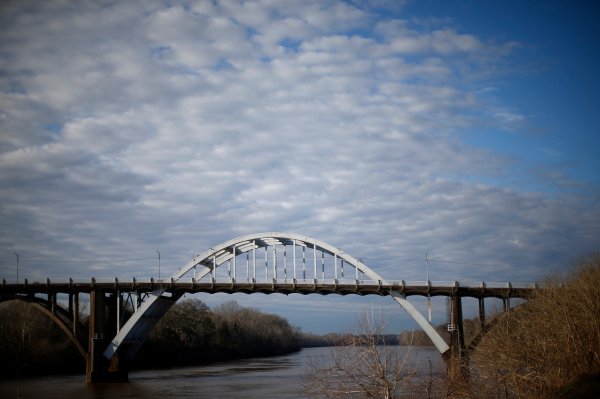 The Long Road from Selma
Next Up: Editor's Pick