The focus of the conversation when President Barack Obama meets Pope Francis on Thursday is expected to be the gap between the rich and the poor. Obama has called income inequality “the defining challenge of our time,” and Pope Francis has made the plight of the poor the centerpiece of his papacy. “One of the things that the Pope has done globally is put the issue of poverty back on the list,” says Stephen Schneck, director of the Institute for Policy Research & Catholic Studies at the Catholic University of America in Washington.

For Obama, whose job-approval rating slipped to a lowly 41% earlier this month, the meeting is a rare chance to share a common platform — both physically and in terms of policy — with a Pontiff who enjoys the popularity of a media superstar. “It would be terrific for any politician on the planet to have his picture taken next to Pope Francis right now,” says Schneck, who served during the last election as national co-chair of Catholics for Obama. “Here in the United States, politicians like Paul Ryan are talking about poverty almost every day, and I think we have to credit the Pope with that.”

In the first year of his papacy, Francis has shifted the Catholic conversation toward Obama’s side of the court, lowering the heat on culture-war battles like gay marriage in favor of an emphasis on the least fortunate. But the two men may find that they also have plenty on which to disagree. The meeting comes two days after the U.S. Supreme Court heard arguments in a challenge to the Affordable Care Act, Obama’s signature accomplishment, on grounds that it violated religious freedom by requiring for-profit corporations to provide insurance coverage for contraception. It’s an issue repeatedly stressed by the U.S. Conference of Catholic Bishops and which Francis is likely to raise.

The visit will be the second Obama has made to the Vatican, and his previous appearance, along with a meeting in January between U.S. Secretary of State John Kerry and his counterpart Pietro Parolin, offer hints of what the President can expect. In 2009, Obama met with Francis’ predecessor, Pope Benedict XVI. The two talked for a little less than half an hour, nearly double the 15 minutes that had been allotted. In a conversation that seemed to be a search for common ground, the two discussed immigration, the global economic crisis and the peace process in the Middle East. Benedict raised the issue of abortion, and Obama pledged to do everything in his power to reduce their numbers.

During Kerry’s visit, emphasis was on the Middle East, with special attention paid to Syria, according to a statement released by the Vatican after the meeting. The focus of the encounter had been announced ahead of time to be on international affairs, but Parolin also took the opportunity to raise his concern for the requirement that contraception be covered under the Affordable Care Act. “There’s a little bit of a precedent for getting into unforeseen issues,” says John Wauck, a priest of the Opus Dei and a professor at the Pontifical University of the Holy Cross in Rome.

Indeed, Francis has not shied away from confrontation. As Archbishop of Buenos Aires, he clashed repeatedly with Argentine President Christina Kirchner over gay marriage, abortion and contraception. And during discussions in 2013 over whether the U.S. should intervene in Syria, Francis’ was one of the loudest voices in opposition to a proposed bombing campaign. “This Pope is coming from a southern-hemisphere perspective,” says Schneck. “American exceptionalism in international affairs isn’t something that’s automatically going to be accepted.”

Other issues that could come up during the meeting include climate change, workers’ rights and immigration. While Obama favors immigration reform, his Administration has been unyielding when it comes to deportations. Francis, by contrast, has emphasized the plight of migrants. In July, he visited the tiny Italian island of Lampedusa to call attention to those who have died crossing the Mediterranean from Africa to Europe. At the end of this month, a group of U.S. bishops is planning to follow the Pope’s example and perform a mass on the U.S.-Mexico border to draw attention to the immigration debate. “The Pope is full of surprises,” says Wauck. “All bets are off about what he might want to talk about to the President of the United States. He’s broken with convention so often in the past.” 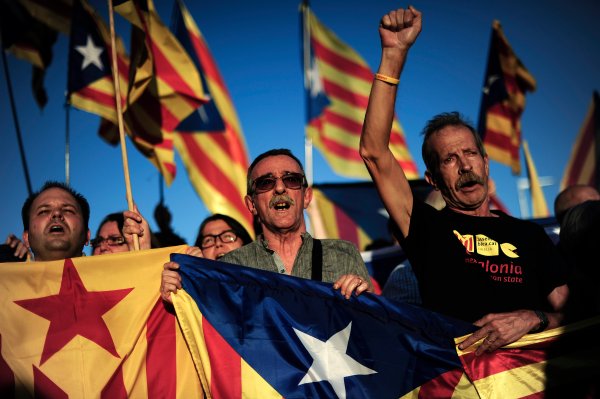 Spain Says Catalonia Can't Vote for Independence, But Catalans Will Go Ahead Anyway
Next Up: Editor's Pick