This may have been the week you watched the Super Bowl instead of Downton — but, as the Dowager Countess might say, “What is a Super Bowl?”

Here’s what we do know: spoilers follow for the Super Bowl Sunday episode of Downton Abbey.

Remember how Robert’s birthday was coming up and the Crawley ladies were working on a surprise party for him? Remember how Edith hasn’t heard from Michael Gregson and she went to the doctor? Remember how Jimmy was cruising for a bruising by making fun of Alfred? Remember how Evelyn Napier didn’t really say what his mission in Yorkshire was? Remember how the Dowager Countess thinks young Pegg the gardener is a crook? Remember how Bates’ response to the assault on Anna was just a teensy bit strained (i.e. he’s says he’s going to kill someone)?

Well, all those things are — so far — playing out exactly as expected.

The surprise party: Obviously the surprise was that Rose hired Jack Ross’ band to play at Downton for Robert’s birthday. Though Thomas and Baxter (who doesn’t like being a snitch anymore) were worried the surprise was something bad, it actually goes over pretty well. The character who comes closest to being overtly racist is Edith, which seems very Season 1 of her, but her prickliness does have another reason, which is…

Edith’s trip to the doctor: Yep, she’s pregnant. Weird to find that out by letter. Nobody understands why she’s so upset — they reassure her that Michael Gregson is just missing, not dead — but obviously she has good reason.

Footman drama: Alfred is sad he didn’t get into the cooking class…but then it turns out someone else dropped out, so he’s in! Everyone is happy except Daisy. Daisy is sad. Later, when Ivy and Jimmy go on a date, he makes a move on her and she’s scandalized. She comes to appreciate that Alfred was a really nice guy, which pisses Daisy off because Ivy’s indifference is part of the reason Alfred wanted to leave in the first place. Daisy is not only sad, but also mad. (Also, Molesley gets the job as Alfred’s replacement.)

Evelyn and Mr. Blake: When Evelyn and his boss, Mr. Charles Blake, arrive for their stay at Downton, Mary et al. discover that they’re not in Yorkshire to help the landed estates, they’re there to assess how to government should profit from their demise. Mary is pissed off by Blake’s attitude, Blake snaps at Mary and Evelyn fawns over her — which, unsurprisingly, means there looks to be a love triangle a-brewing.

Young Pegg: A netsuke carving goes missing at the Dowager’s and Pegg was in the room again, so he gets fired. Isobel is outraged at the lack of due process, even more so when the netsuke shows up but the Dowager doesn’t think it proves that Pegg is innocent. So Isobel proceeds to pull her Isobel-est stunt ever: she pretends to feel faint while visiting the Countess’ house while the Countess is out, asks for a glass of water and snoops around while the butler is getting it. She finds the missing paper knife in the side of a chair and is totally vindicated — until she comes over to yell at the Dowager and finds that the Dowager has, upon receiving the knife back, already re-hired Pegg. [Note: Isobel has some great hats. Mary’s supposed to be the fashionable one, but Isobel’s hats are the items I’d want to wear.]

Broody Bates: Even though there’s no secret anymore about why she’s sad, Anna knows things aren’t right between her and Bates. She suggests they go out on a fancy date to make new memories. At the restaurant, the maitre d’ — who is channeling Rowan Atkinson in Love Actually — won’t seat them because they’re not fancy enough, but Cora is there and she makes it happen. Even so, the date doesn’t do the trick of making everything better again. Case in point: Bates actually says the phrase, “I want to murder.”

Why it doesn’t really matter that none of the above was a surprise: In between the plots moving forward as we guessed they might, the episode contained some real emotional highlights. Alfred’s good-bye won the evening, starting with his brief but moving public appreciation of Mr. Carson’s kindliness as a teacher and finishing with a a nice no-romance-but-I-care-about-you good-bye speech for Daisy. Second place goes to Isobel, Tom and Mary, who had a heart-to-heart in the nursery about parenting, love and death.

Besides, there were some actual surprises:

Dowager Zinger of the Week:

Evelyn: “Is this your first experience of jazz, Lady Grantham?”

History Lesson of the Week: The movie Ivy and Jimmy go see is The Sheik, a silent film starring Rudolph Valentino. According to NPR, it was part of a whole genre of “desert romance” stories that were popular at the time. Clips are available online: 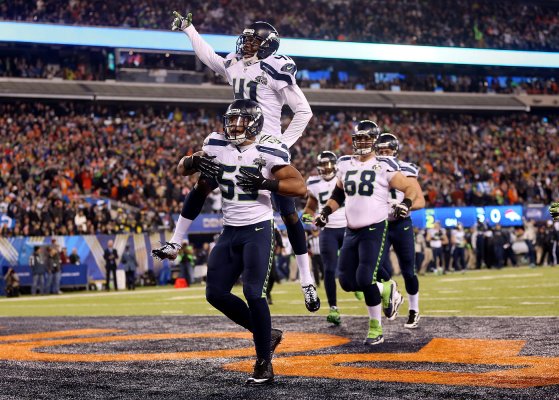 Thanks To Dominant Defense, Seattle Seahawks Win Super Bowl
Next Up: Editor's Pick