The Road from Selma to Ferguson

The Edmund Pettus Bridge is seen in Selma, Alabama on Jan. 9, 2015.
Jim Young—Reuters
By Charlotte Alter

We remember our wars by their battlegrounds. By the same logic, the long fight for civil rights in the United States is sometimes reduced to a series of cities: Montgomery, Little Rock, Selma.

Some would now add to the list Ferguson, Mo., the site of unrest last year over the shooting of an unarmed black teen and the subject of a recent scathing federal report on institutional racism. Not to mention Cleveland, Staten Island and Dayton, where encounters with the police turned suddenly deadly for African Americans.

For the protesters of today, the parallels are unmistakable with Selma, where those calling for voting rights were brutally beaten by local police on the Edmund Pettus Bridge 50 years ago Saturday.

Brittany Packnett, the executive director of Teach for America in St. Louis and an organizer in Ferguson, was at a sneak preview of the movie Selma in December when word spread that the New York police officer who was videotaped choking Eric Garner would not be indicted for his death. For her, it only seemed to underline the connection between Selma and cities like Ferguson, 600 miles to the north.

“Our eyes watered up from that same tear gas 50 years later, on a street a couple hundred miles up from the Edmund Pettus Bridge,” she said.

But the road from Selma to Ferguson is not a straight one. While voting rights remains an important topic in the black community, it is now police violence that is animating the most visible public protests. Instead of a backdrop of official segregation, they’re occurring under the nation’s first black president. And the regimented civil rights movement of the 1950s and ‘60s has given way to a more democratic, decentralized force.

For some, that decentralization threatens the movement’s ability to make real change.

“The question is, if we have a ‘movement,’ and I’m not sure we do,” said Henry Louis Gates, Jr., a professor of African-American history at Harvard University. “A movement has an analysis, an agenda, and a plan of action. Every revolution—the Bolshevik revolution, the Cuban revolution, the American revolution—has a text.”

Focusing only on specific acts of police violence is “like putting a Band-Aid on cancer,” he said.

But prominent members of the Black Lives Matter movement — which in true 21st century fashion began as a hashtag on Facebook and Twitter — say that times have changed. They use similar tactics: peaceful protest, direct action, civil disobedience. But they intentionally reject the leadership structure that elevated Dr. Martin Luther King to the status of a historical icon.

Patrisse Cullors, executive director of human rights group Dignity and Power Now and co-founder of Black Lives Matter with Alicia Garza, says there’s a “sense of nostalgia” for an old style of leadership that doesn’t fit with the democratic values of the new movement. As she talks, she makes sure to credit other activists constantly, noting that she and others have pledged not to call themselves “leaders.”

They also break with the past on issues of style. While the protesters of the ‘50s and ‘60s wore their Sunday best, marched in an orderly fashion and used uniform messaging on their signs, today’s protesters are more individualistic and worry less about appearing respectable. Instead, the protestors in Ferguson and New York are more concerned with amplifying all voices than with conforming to expected behaviors.

“Respectability politics does not save you from racism in this country,” Packnett says. “It simply does not.”

Some protesters even argue that Americans have overemphasized the achievements of the past.

“The first civil rights movement addressed these things on paper and through legislation, but they never addressed the idea of us being human beings,” says Damon Davis, a Ferguson-based artist affiliated with Black Lives Matter.

That legislative legacy is also in doubt. The marchers in Selma were demanding a specific package of federal legislation — the Voting Rights Act of 1965 — that ensured that black voters could cast their ballots without facing literacy tests and other hurdles designed to suppress the vote. In 2013, the Supreme Court struck down a portion of the law that required certain areas, mostly in the South, to get preapproval from the federal government before changing voting laws.

By contrast, the protesters of the Ferguson era have not yet settled on a particular demand from the federal government. While there is bipartisan support for a criminal justice reform proposal sponsored by Democratic Sen. Cory Booker and Republican Sen. Rand Paul, activists are seeking a more fundamental shift in the relationship between police and the black community, one that may only be achieved on the local level.

Packnett, who served on a White House task force that looked into 21st century policing, thinks that the key may be using the influence of the federal budget to implement change. That would mean things like putting restrictions on the use of military equipment given to local police forces or using applications for grants to query the diversity of police officers. The report also suggests using special prosecutors for cases of police brutality and considering having police officers wear body cameras.

To some, the biggest difference between Selma and Ferguson is that it’s a lot harder to identify the problems today than it once was.

“There were Jim Crow laws, you had to dismantle the laws. Dismantling it was complicated, analyzing it wasn’t,” Gates says. “Analyzing what’s happened to the class structure in black America ain’t that simple anymore. That’s why people mobilize around these specific acts of seemingly random violence.”

Gates returned again to his point: “Until we have a text for the next revolution, we won’t have a revolution.”

To some of the protesters of today, though, historians are simply looking in the wrong place. 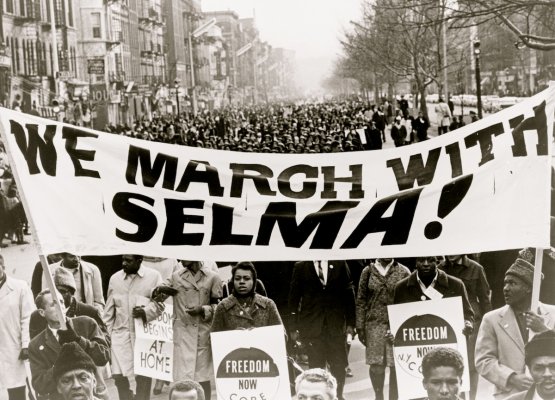 Selma Is Now? No, Not Really
Next Up: Editor's Pick