More than 300 veteran Republican lawmakers, operatives and consultants have filed a friend of the court brief at the Supreme Court in support of same-sex marriage late Thursday.

The amicus brief, organized by former Republican National Committee Chairman Ken Mehlman, was filed for the four same-sex marriage cases the Court will hear on April 28 that could legalize the unions nationwide. In 2013, Mehlman marshaled a similar effort for the case that overturned California’s Proposition 8, which had banned same-sex marriage in the state.

Among the signatories are 23 current and former Republicans members of the House of Representatives and Senate and seven current and former Governors. Sens. Susan Collins and Mark Kirk have signed onto the brief, as has Massachusetts Gov. Charlie Baker and former Utah Gov. Jon Huntsman. Other notables include former New York City Mayor Rudy Giuliani, retired Gen. Stanley McChrystal and billionaire GOP mega-donor David Koch.

The 2013 brief included 131 signatures, featured many former top aides to Republican presidential nominee Mitt Romney, including his general counsel and two senior advisors. The list has now grown to 303 signatories.

In an interview with TIME, Mehlman pointed to the growing national consensus and within the GOP on the issue. “There’s been an increase since the last time in public support for marriage equality across all ideological, racial, and political groups,” he said.

The brief makes a conservative case for the court to strike down same-sex marriage bans in Michigan, Ohio, Kentucky and Tennessee, arguing they are “inconsistent with amici’s understanding of the properly limited role of government.”

“Although amici hold a broad spectrum of socially and politically conservative, moderate, and libertarian views, amici share the view that laws that bar same-sex couples from the institution of civil marriage, with all its attendant profoundly important rights and responsibilities, are inconsistent with the United States Constitution’s dual promises of equal protection and due process,” the brief states.

Some aides to Republican presidential candidates are hoping that if the Court’s rules in favor of the unions it will provide cover for their bosses, who are hoping to avoid talking about the issue. After the party’s 2012 electoral defeat, its autopsy found that gay rights issues are a gateway subject not just for LGBT voters, but also for young voters of all stripes. “We need to campaign among Hispanic, black, Asian, and gay Americans and demonstrate we care about them, too,” the Growth and Opportunity Project report stated.

Wisconsin Gov. Scott Walker and New Jersey Gov. Chris Christie both dropped opposition to same-sex unions in their state after court rulings forced their hand, but they remain personally opposed. After marriages began in his state in January, former Florida Gov. Jeb Bush called for respect from all sides. “I hope that we can show respect for the good people on all sides of the gay and lesbian marriage issue — including couples making lifetime commitments to each other who are seeking greater legal protections and those of us who believe marriage is a sacrament and want to safeguard religious liberty,” he said.

More conservative Republicans may seek to cater to Iowa and South Carolina’s large evangelical primary blocks in order to attract votes, setting the stage for potential clashes. But the political ground is shifting. According to an NBC/Marist survey last month, roughly half of likely GOP caucus and primary voters in Iowa, South Carolina, and New Hampshire find opposition to same-sex marriage “mostly” or “totally” unacceptable.

Mehlman said he was not concerned that the Court’s ruling could prompt a backlash among conservative voters that might alienate moderates.

“Republicans traditionally have great respect for court decisions, particularly the Supreme Court,” he said. And pointing to rapid shifts in public opinion in states that have legalized same-sex marriage, he predicted Republicans wouldn’t drum up the base against the Court should it overturn the marriage bans. “The data shows that public acceptance increases very quickly, and very significantly.” 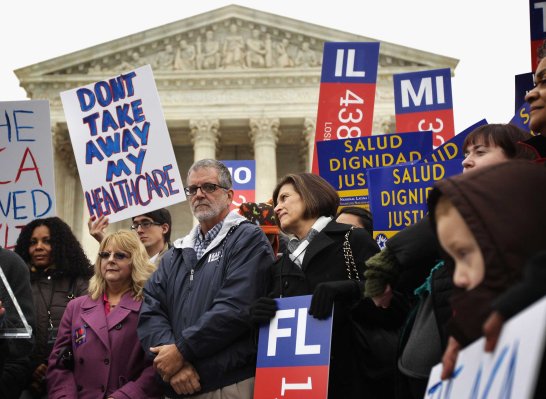 Obamacare Back in Roberts' Court
Next Up: Editor's Pick