After a few years of growing cultural unease with elephant captivity, Ringling Bros. and Barnum & Bailey announced on Thursday that their shows would, by 2018, no longer include elephant acts.

Other circuses have given up elephants before, and others will likely continue to incorporate them into shows — but it’s particularly significant that this one has decided to part with pachyderms.

After all, an elephant is why that circus exists in the first place.

As TIME explained in 1923 review of a biography of Phineas Taylor Barnum, the showman whose name is a key part of Ringling Bros. and Barnum & Bailey — the mouthful of an official title of the circus in question — started as a sideshow curator. He was middle-aged when he turned his natural salesmanship toward a circus, but it was Bailey, in fact, who had an elephant first:

Thus, in 1881, was born Barnum & Bailey — thanks to an elephant. It was only a year later that they acquired perhaps the most famous elephant in history, Jumbo, who had been born in Africa but was living in London when Barnum brought him stateside, further establishing the link between the circus and the animal. According to TIME, his first six weeks at Madison Square Garden in New York City earned Barnum & Bailey a whopping $336,000. (That’s about $7.5 million today, and yes, the word “jumbo” is an eponym.)

Barnum & Bailey merged with Ringling Bros. Circus in 1907 and the two circuses began doing combined shows about a decade later.

Read a 1952 profile of John Ringling North, here in the TIME archives: Personality 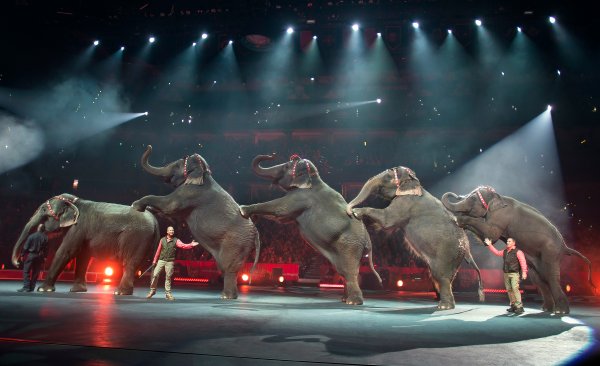