The Department of Justice has cleared Darren Wilson, the police officer who shot and killed teenager Michael Brown in Ferguson, Mo., of committing civil rights violations in the August confrontation that sparked sometimes violent local and national protests.

A separate report from the Justice Department did find, however, that the Ferguson Police Department was in frequent violation of several provisions of the Constitution.

The report, one of two released on Wednesday, broadly corroborates Wilson’s account of what happened in the St. Louis suburb on Aug.9. The officer said he spotted Brown and a friend walking in the middle of the street. Wilson told prosecutors and investigators he suspected the pair in the theft of cigarillos from a nearby convenience store, and called for backup before pulling to a stop near them.

The officer and some witnesses said Brown reached into Wilson’s police car to punch and grab him. Even though other witnesses stated that Wilson had reached out of his vehicle to grab Brown by the neck, prosecutors said their accounts were “inconsistent with physical and forensic evidence.”

Wilson said he took out his weapon while still in his vehicle and shot Brown in the hand as the teenager attempted to gain control of the gun. The report found “no credible evidence to disprove Wilson’s account” of what happened inside the vehicle.

Brown then ran away and Wilson gave chase, the report said. Autopsy results found that Brown had not been shot in the back as he was running away, as some witnesses reported. Instead, the report found, Brown was approaching Wilson in a manner that “appeared to pose a physical threat” when he was shot. The shooting death led to weeks of often-violent protests in the city.

Witnesses said that “Wilson fired at Brown in what appeared to be self-defense and stopped firing once Brown fell to the ground.” Though a number of witnesses claimed Brown held his hands up in a surrender position before Wilson fired, the report found that they were not credible.

“Some of those accounts are inaccurate because they are inconsistent with the physical and forensic evidence; some of those accounts are materially inconsistent with that witnesses’ own prior statements with no explanation,” the Wilson report concluded. A state grand jury declined to indict Wilson in November; he resigned from the Ferguson Police Department that same month.

A separate Justice Department investigation opened after Brown’s shooting has found routine patterns and practices of racism in Ferguson, including the excessive use of force and unjustified arrests.

“Our investigation showed that Ferguson police officers routinely violate the Fourth Amendment in stopping people without reasonable suspicion, arresting them without probable cause, and using unreasonable force against them,” Attorney General Eric Holder said in a statement accompanying the release of the reports. “Now that our investigation has reached its conclusion, it is time for Ferguson’s leaders to take immediate, wholesale and structural corrective action.”

Brown’s parents said they were “saddened” by the decision to clear Wilson, but said they were encouraged by the DOJ’s findings about the Ferguson police. “It is our hope that through this action, true change will come not only in Ferguson, but around the country,” Lesley McSpadden and Michael Brown, Sr. said in a statement. “If that change happens, our son’s death will not have been in vain.” 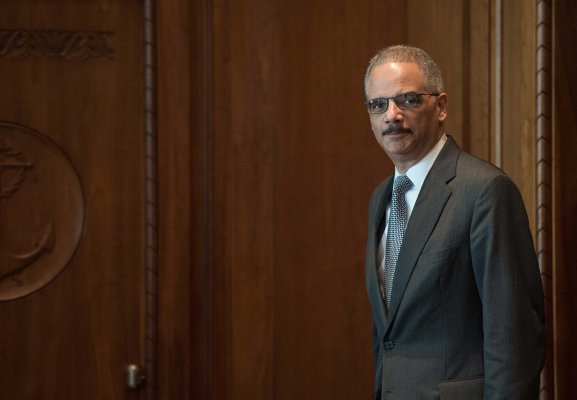 Holder Wants to Lower Bar for Civil Rights Cases
Next Up: Editor's Pick