The precursor to the Barbie doll was not meant for children.

Born in Germany in 1952, the inspiration for America’s most famous doll was a saucy high-end call girl named Lilli. First created as a comic-strip character in the Hamburg newspaper Bild-Zeitung, the Bild Lilli doll became so popular that she was immortalized in plastic — and sold as an adult novelty, according to Robin Gerber, the author of Barbie and Ruth.

“Lilli dolls could be bought in tobacco shops, bars and adult-themed toy stores,” Gerber writes. “Men got Lilli dolls as gag gifts at bachelor parties, put them on their car dashboard, dangled them from the rearview mirror, or gave them to girlfriends as a suggestive keepsake.”

The proto-Barbie was just shy of a foot tall, with bulging breasts and a platinum-blonde ponytail, made up for a night on the town with red puckered lips and blue eye shadow. Although Barbie’s curvy proportions are modeled after Lilli’s, the German doll’s heavy makeup and suggestively arched eyebrows didn’t carry over to the American version. The dolls also have tellingly different feet, according to M.G. Lord, the author of Forever Barbie: The Unauthorized Biography of a Real Doll.

“Unlike Barbie, Lilli doesn’t have an arched foot with itty-bitty toes. She doesn’t even have a foot,” Lord writes. “The end of her leg is cast in the shape of a stiletto-heeled pump and painted a glossy black.”

In the comics, Lilli was witty, irreverent and sexually uninhibited. One strip, summarized by Lord, shows Lilli covering her naked body with a newspaper and explaining to a friend, “We had a fight and he took back all the presents he gave me.” Another shows Lilli in a bikini; when a policeman tells her that two-piece swimsuits are illegal, she says, “Oh, and in your opinion, which part should I take off?”

Nonetheless, Lilli dolls were soon coveted by children as well as adults. They caught the eye of 15-year-old Barbara Handler on a 1956 vacation in Switzerland with her mother, Ruth — a co-founder of the Mattel toy company. Ruth Handler brought three of the dolls home with her to California, per TIME. Three years later — on this day, March 9, in 1959 — she introduced her own adaptation at the American International Toy Fair in New York. The new doll was named Barbie, after Handler’s daughter.

By the time Barbie turned 50, in 2009, Mattel had sold more than 1 billion copies of the doll, partly by “cultivating its wholesome image,” according to TIME. But Handler acknowledged that Barbie was undeniably sexier than most American dolls of her day. She didn’t see anything wrong with that, according to her 2002 obituary in the New York Times.

“Every little girl needed a doll through which to project herself into her dream of her future,” she said in a 1977 interview, as quoted in the obituary. “If she was going to do role playing of what she would be like when she was 16 or 17, it was a little stupid to play with a doll that had a flat chest. So I gave it beautiful breasts.”

Read a 1962 article about the toy company, here in the TIME Archives: All’s Swell at Mattel 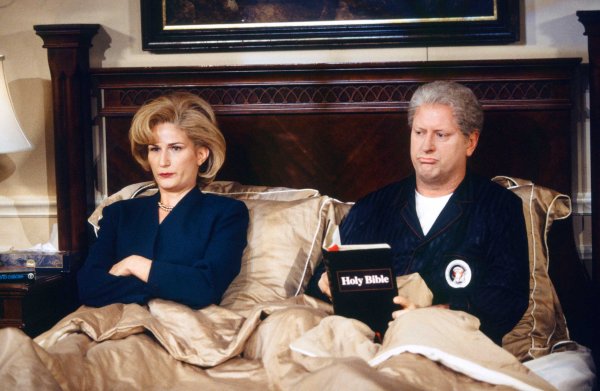 See the Best Impersonations of Presidents From Saturday Night Live
Next Up: Editor's Pick