Hollywood star and longtime vegan Joaquin Phoenix has taken a stand against China’s dog-leather industry in a new video campaign by animal-rights group People for the Ethical Treatment of Animals.

The sickening footage claims to show workers at a slaughterhouse in northeast China’s Hebei province beating dogs to death with a stick before having their throats slit and their skin ripped from their bodies.

Some are supposedly still alive when they are skinned.

In the clip, the Inherent Vice actor says it was “one of the worst things I’ve ever seen.”

The footage, originally released in December, is from a yearlong investigation conducted by PETA’s Asia department into China’s dog-leather industry.

The facility in the clip told PETA they bludgeoned 100 to 200 dogs every day and when the film was shot they had 300 dogs in the compound waiting to be killed.

Dog leather, which is cheaper to produce than material from cows or sheep, can be made into gloves, coat trims and other accessories, and is exported all over the globe.

China is the world largest leather producer, with exports this year slated to top $270 billion, but there are no penalties against abusing animals killed for their skin.

PETA claims the leather from such factories could end up in shops on U.S. or European high streets because, unless the skin is DNA tested, you won’t know where or what animal, it came from.

“If you buy leather gloves, belts or shoes, remember,” says Phoenix, who has appeared in several other PETA campaigns, “there’s no easy way to tell whose skin you’re really in.” 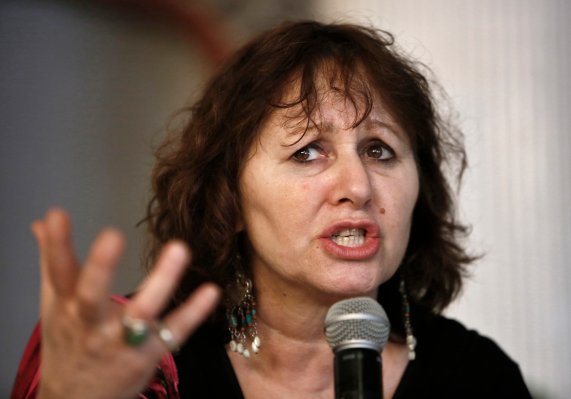