If this whole president thing doesn’t work out, Bobby Jindal should consider another career path: columnist.

Since becoming the governor of Louisiana in 2008, Jindal has amassed a clip file of guest editorials that would be the envy of any freelance opinion writer.

By TIME’s count, he’s been published 47 times in general interest outlets such as the Washington Post, CNN and Politico as well as conservative-leaning media such as the Wall Street Journal, Fox News and National Review. Of those, 41 have been since the start of his second term in 2012.

“Whether you’re a fan of his or not, the guy is a one-man think tank,” Curt Anderson, a political consultant who’s worked with Jindal since 2003, tells TIME.

It’s a canny strategy for an outside-the-Beltway governor with his eye on the Oval Office and Jindal is using it for three different but related strategies:

Though his output is unusual, Jindal’s op-ed writing is not unusual among likely presidential candidates. In fact, it’s become something of a rite of passage.

In fact, politicians now get miffed if they aren’t published.

Still, Jindal’s output is notable. His pieces are on a par with some full-time columnists, often making use of clever conceits like focusing on how Hillary Clinton opposed the individual mandate in 1993, outlining ways that President Obama could use his executive powers to improve the economy or tallying up how much the average insurance premium has risen since the Affordable Care Act was signed.

Anderson says that the pieces are all Jindal’s ideas.

“Sometimes he’ll write them and sometimes he’ll say we should write something on this and talk for five minutes and we’ll write it,” he says. “It’s different every time.”

The most influential column came about almost by accident in late 2012. Anderson said some Jindal staffers and consultants were having a meeting on some other topic when the governor — who got his start in politics as the head of the Louisiana Department of Health and Hospitals — started talking about how Republicans should address the politics of birth control, which he thought had become “silly.”

“We were all sitting there thinking, ‘Huh,’ — we hadn’t really thought of that,” he recalls.

The Jindal column that resulted, “The end of birth-control politics,” ran in the Wall Street Journal on Dec. 12. It called for Republicans to embrace over-the-counter birth control pills as a way of countering Democrats’ “war on women” narrative with a free-market solution. Over the following year, Jindal staffers noticed that more and more Republicans were adopting the platform.

By the 2014 midterm elections, Republican Senate candidates in Minnesota, Virginia and Colorado had adopted it in their campaigns. Though it didn’t help carry the first two states, it arguably helped Sen. Cory Gardner beat back arguments from incumbent Democratic Sen. Mark Udall to win in Colorado. “I believe the pill ought to be available over the counter, round the clock, without a prescription — cheaper and easier, for you,” Gardner argued in an ad.

It remains to be seen whether Jindal’s columns will help him win his own likely race for the Republican presidential nomination in 2016. Guest editorials can be a negative, especially when you don’t get to write the headline, as Mitt Romney learned when his 2008 New York Times column headlined “Let Detroit Go Bankrupt” became an issue in a debate with President Obama. And former Speaker Newt Gingrich’s long paper trail of punditry weighed down his 2012 campaign.

But Shannon Bates Dirmann, a spokeswoman for Jindal, said in an email to TIME that the columns have already served their purpose.

“The Governor gave a major speech to the Republican National Committee after the 2012 elections in which he called on Republicans to just not be party of no and have new ideas,” she wrote. “He took his own advice.” 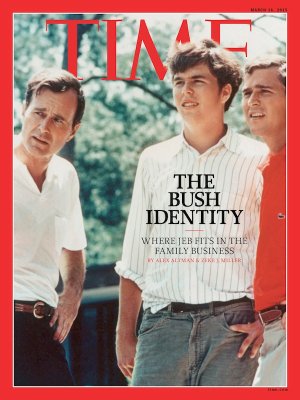 7 Things We Learned Writing a Cover Story About Jeb Bush
Next Up: Editor's Pick