Patricia Arquette on Her Oscar Speech: 'I Don't Think People Really Understood What I Meant'

No matter what happened at the Oscars this year, where Patricia Arquette ended up winning Best Supporting Actress for her role in Boyhood, the actress had her next role lined up.

Arquette stars as the head of a group of technologically-agile sleuths in CSI: Cyber, which debuts March 4 at 10 p.m. It’s a pivot for an actress who was last widely seen as an intuitive, emotional mother in Richard Linklater’s film, but hardly new for an actress who previously won an Emmy for the police procedural Medium.

In conversation with TIME, the actress addressed those who thought her Oscar speech was insufficiently intersectional, as well as the state of network TV and of cyber-security.

TIME: Has working on this show taught you anything about technology?

Patricia Arquette: Well, it’s pretty terrifying. Every script I got, I’d be like: What? Technology has become such an integral part of our lives, and it’s just going to become more dominant. it’s illuminating and terrifying to learn what criminals are able to do now.

So has it prompted you to use technology differently?

It’s definitely changed the way I looked at my technology. I never was a huge technology person. But one thing people can do is have two-step verification on their email: That’s a good place to start.

What do you make of Hillary Clinton’s emailing on a personal account when she was Secretary of State?

I read a little bit about that, but I didn’t think about it pertaining to the show. Everybody’s figuring out: “Where are you most vulnerable?” “Who would they most likely target?” You know, we’ve been spying on other governments, so I don’t know that there’s any foolproof thing.

It seems like the revelations of Edward Snowden made all of these questions more pressing.

Definitely. I don’t know how you would avoid that if you wanted to; it’s revolutionary information. And this is the way we communicate. We have cell phones; it’s great walking around the city able to communicate. But there’s also a trail. When you look at how criminals are exploiting those flaws in our systems, it’s really scary.

Given the content of your Oscar acceptance speech, did you fight for equal pay to your male counterparts on the CSI: Cyber set?

I wasn’t talking about my own position. I know I’ve been really blessed in my life. What I was talking about is the other 52 percent, and how it doesn’t make sense why they’re being discriminated [against] because of their gender. They’re taking the same student loans but taking years to pay it back, making half a million to a million dollars less over a lifetime. That’s money they’re not putting into Social Security, or using to pay for college or childcare. I won an Academy Award because I played a single mom, moving and moving again and trying to provide for her kids. I thought long and hard about how her life would have been better with wage equality, and if she made those extra cents on the dollar; and how if she was Latina, she’d need to make those fifty cents more, or how if she was African-American, she’d need to make those 40 cents more.

Did it surprise you that there was such a negative response to your speech and your backstage comments?

Do you feel pressure, external or internal, to be more circumspect now that you’re employed on a major TV franchise, airing on a corporate-owned broadcast network?

Some people are concerned about that and maybe they don’t voice their opinion. I don’t feel that way. I don’t feel like I’ve been inhibited from being myself, an American person with freedom. And it wasn’t my idea to have a female middle-aged woman as the lead in a CSI. That came from CBS. That was their concept. It was forward-thinking, really interesting, and exciting, to take one of the world’s biggest franchises and have a female lead and young people bringing their own energy.

A lot of people were surprised that you were moving from winning the movies’ highest honor to work in TV — discounting that this was already underway before Boyhood hit so big. But what do you make of the TV/film divide?

I really am driven by material. This material is interesting to me. I am an American living in the world today; I do see how much technology is driving our lives and how dangerous it is. That’s illuminating and interesting and shocking to me. This is like the Wild West.

What’s it like working with the cast [which includes James Van Der Beek and Shad Moss, formerly known as Bow Wow]? And how did you feel about getting offered the lead, given how tough the industry can be for actresses over 40?

They’re so good. I felt so excited the first time we started working. They’re really talented. We have this kind of electric energy, and they’re super solid actors.

And I was totally excited about it. To work on a global franchise like this as a female lead is really exciting. It’s really cool to be working in an arena where you’re going into every country in the world.

Is it strange to work with the subject matter you are on a daily and weekly basis?

This character’s so different from me. She’s so tech-savvy. I’ve played a lot of characters who are emotionally driven. But her safest place is being in her brain. Her skill-set comes from her brain. She’s not the most nurturing person.

Is the pace difficult? You’ve been away from TV for four years, and movies tend to have slightly more forgiving schedules.

We have a strong team on this show. They do [the] heavy lfiting. It’s not as hard as Medium, where I was in every scene except for the crimes. I have nothing but appreciation and gratitude for this experience, and the other actors I’m working with. It was a long time ago when I started doing Medium because I didn’t like the parts coming to me. They were pedestrian. The good wife waiting around for her husband, or the annoying wife so the husband could go act out. Medium gave me a much more interesting part to play. And with that success from Medium, I got to be the lead on a show that was [already] successful.

Did you see the GIF of Meryl Streep and Jennifer Lopez reacting to your speech? Or did you notice them from the stage?

Somebody sent me that. But I was so nervous when I was up there — I couldn’t tell you.

Really? After winning so many other awards, you seemed like an old hand.

I don’t know if you can become an old hand. It was just mind-boggling, the feeling. It was exhilarating and terrifying at the same time. 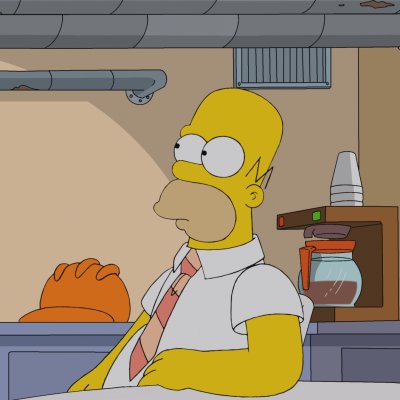 Apparently The Simpsons Discovered the Higgs Boson Particle Before Everyone Else
Next Up: Editor's Pick