These Are the Best (and Worst) States for Business

While the United States was founded on the principle of equality for all people, the 50 states are decidedly unequal in providing opportunities for business. For companies choosing to locate in the United States, deciding the state in which to base their operations can be very difficult.

To determine America’s best states for business, 24/7 Wall St. identified nearly 50 measures that contribute to the business climate and reviewed them in each of the 50 states. The measures were classified into eight larger categories that independently measured various risks and benefits of doing business in each state. (Click here for a complete methodology.)

The health of a state’s economy, the result of a confluence of factors, is perhaps the most important consideration for businesses choosing a location. The growth of economic output in 2013 in seven of the 10 best states for business was greater than the national GDP growth rate of 1.8%.

However, while a state’s economy is tied to a host of factors, not all factors benefit businesses in the same way. The business climate in some states was more favorable to companies primarily concerned with minimizing the costs and risks of operating a business. These states, which include North Dakota, Wyoming, and Texas, tended to enjoy ample natural resources, low cost of living, and low regulation.

Some states benefit from a well-educated and highly skilled labor force. They are able to attract businesses that require these skills, such as professional and business services, health and education services, and information. In return, these businesses drive economic growth in these states through technology and innovation. These states include Massachusetts, Virginia, and Minnesota.

While it is emphasized more in some industries than in others, a low cost of doing business is a major reason to choose to operate in a particular state. The average cost of goods and services in six of the best states for business was lower than the national average. This was generally driven by beneficial tax climates, lower expenses from utilities and real estate, and lower average employee compensations.

Although the type and size of operating costs vary considerably between industries, wages are a major expense for many businesses. The average wage and salary in three of the 10 best states for business was roughly inline with the national average of $50,012 in 2013, while in five other states, average wages were below the national figure.

While lower wages lower the cost of doing business, they are also frequently tied to jobs with lower educational attainment. Among the five best states for business with lower than average wages, three had lower educational attainment rates than the national figure. In these states, including North Dakota and Wyoming, the prevalence of industries that require high-skilled labor was also relatively low.

In addition to a highly-educated labor force, access to capital can also drive innovation in a state. In 2013, 13.26 venture capital deals were made per 1 million Americans. In seven of the worst states for business, there were fewer than three such deals per 1 million residents. In the best states, on the other hand, investments were far more likely. In Massachusetts, there were 57 venture capital deals made per 1 million state residents, by far the highest nationwide.

These are the best (and worst) states for business.

The Best States for Business

Based on eight categories, including 47 measures, Minnesota is the 10th best state for business in the country. Informing the state’s high quality of life rank, just 8.2% of Minnesotans did not have health insurance in 2013, the fifth lowest rate nationwide. Also, the state was one of the safest, with a violent crime rate of 223.2 reported incidents per 100,000 people, among the lowest rates in the nation.

The state also received one of the highest scores for Infrastructure. Compared with other states, Minnesota businesses can also expect relatively well functioning transportation system. For example, just 11.5% of the state’s bridges were deemed structurally deficient or functionally obsolete, the lowest rate nationwide and less than half the national percentage of 24.3%. Businesses in the state also have the benefit of a relatively well-educated workforce. More than one-third of adults had at least a bachelor’s degree versus less than 30% of Americans. And 92.4% of state adults had completed at least high school as of 2013, the fourth highest rate in the country.

North Dakota’s oil boom has spurred strong growth throughout the state’s industries, in residents’ personal incomes, and in employment. Less than 3% of the workforce was unemployed in 2013, the lowest in the country. As a consequence of the high levels of investment and spending in the state, North Dakota’s GDP grew nearly 10% in 2013. While this was by far the highest growth rate nationwide and more than five times the national growth rate of 1.8%, growth may slow considerably if oil prices continue to fall.

In addition to high wages and job opportunities, residents benefit from a relatively low cost of living. In 2013, the cost of housing required 26% of a typical household income, the second-lowest median annual affordability ratio nationwide. As in other states with a low cost of living, North Dakota also had a healthy infrastructure. Partly as a result, workers in the state benefited from an average commute time of less than 18 minutes, versus the national figure of nearly 26 minutes. It was the third lowest commute time in the country.

Virginia’s large capacity for innovation, and high quality labor force helped make it the eighth best state for business. The Old Dominion State scored in the top 10 of states for the percentage of STEM jobs — jobs related to science, technology, engineering, or mathematics. More than 36% of adults in the state had completed at least a bachelor’s degree, which helped strengthen the labor force. The state also fared very well for its business-friendly regulatory environment, its relatively low poverty rate, and its comparatively low energy costs.

What held Virginia back from an even higher overall ranking was its weak infrastructure, which was ranked lowest among the states. Residents had one of the longest average commuting times of 27.7 minutes, and the state spent among the least per mile on road repair. Virginia also struggled with weak real GDP growth, 0.1% in 2013, third lowest in the country.

Colorado’s business climate is among the best in the country largely due to a strong labor market and an especially strong and innovative technology sector. These features are interwoven as a highly educated workforce is essential for innovation. Nearly 38% of adults in Colorado had at least a bachelor’s degree as of 2013, the second highest rate nationwide. As of that year, 14% of adults had completed a graduate or professional degree, a higher percentage than in all but a handful of states. The state’s population is projected to grow by 13.4% from 2010 through 2020 versus an estimated national growth rate of 7.1%, which also contributes to a strong labor market. Nearly 22% of all jobs in Colorado were STEM positions, the seventh highest proportion in the country.

Like a majority of the best states for business, Moody’s and Standard & Poor’s rated Texas’ credit among the best in the nation. The Lone Star State also led the states in the value of exported goods, which totalled nearly $1.9 trillion in 2012. There were also 386 public use airports, the most in the nation. Curiously, while Texas had the third most post-secondary schools in the nation at 420 in 2013, it actually had the second lowest percentage of adults who had completed at least high school, at 81.9%. Texas benefits considerably from its abundant natural resources. For example, the mining industry accounted for 11.1% of the state’s GDP in 2013, the sixth highest such contribution in the country. Other kinds of businesses do not do particularly well in Texas. The information, finance-insurance-real-estate, professional and business service industries contributed relatively little to the state’s GDP.

5. Delaware
> Real GDP growth, 2012-2013: 1.6% (20th lowest)
> Average wages and salaries, 2013: $51,093 (12th highest)
> Pct. of adults with bachelor’s degree, 2013: 29.8% (19th highest)
> Patents issued to residents, 2013: 453 (15th lowest)
> Projected working-age population growth, 2010-2020: 8.9% (15th lowest)
Based on several factors, Delaware’s regulatory climate was the most favorable nationwide for business. With high percentages of tech workers and strong independent investments, Delaware is also among the best states for innovation. More than 21% of all jobs in the state were STEM jobs, the eighth highest proportion in the country. The average venture capital investment of nearly $14.2 million per deal in 2013 — the second highest such figure nationwide — also reflects the high level of innovation and easy access to capital in the state.

Not so strong was Delaware’s infrastructure, which rated worse than most states. However, the consequence for businesses may be relatively small as businesses are concentrated in industries not especially dependent on transportation. For example, the financial industry, in which goods and services are relatively intangible, accounted for 42.1% of state GDP in 2013, the highest such contribution nationwide. 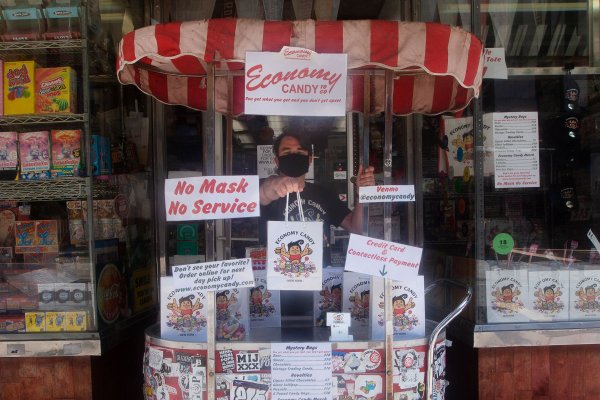 How Small Retailers Are Getting Creative to Survive a Pandemic Holiday Season
Next Up: Editor's Pick