Yesterday, Jared Leto, who for years looked like he was impersonating the guest of honor in da Vinci’s “Last Supper” painting, shocked the world by posting pictures of himself with short hair and no beard to his Twitter account. The reason he looks like fresh-faced Jordan Catalano again is presumably for his role in the DC Comics sure-to-be-blockbuster Suicide Squad. But maybe there’s another reason for the change. Maybe Jared Leto is just as sick of a trend that he presumably started as everyone else. Maybe he wanted the man bun to be gone for good.

Leto wore his infamous ombre locks (RIP) in a man bun to the Golden Globes in 2014 when he won an award for his role in Dallas Buyers Club. He changed it up for the 2015 Oscars, where he let his mane roam free to present an award. Just as plenty of guys are growing out their hair to try to copy his signature look, maybe Leto knows the style is already passé.

A meaty man bun like Leto’s wasn’t so horrible (especially when immaculately styled), and it was functional. There’s a reason you never see a female jogger with her long hair flapping in the breeze, and guys need a way to get their locks out of the way as well. What is annoying is the gross mutation the man bun has wrought—the undercut and top knot phenomenon. This style is achieved when a guy wears his hair long on the top and very short or shaved on the sides (which is called an undercut), and then fashions the long portion into a little beaver tail that shoots out the back of his head. Man, this look is so played out it might as well be The Rachel in 1996.

Leto is presumably one of the progenitors of the look, along with Jake Gyllenhaal, who was spotted wearing the top knot as early as 2013. In fact, as early as 2012 The New York Times spotted the man bun trend coming out of Brooklyn, but as with so many fashion trends these days, it was these celebrity spokesmen (and others) that took the look to the masses.

After Leto’s 2014 win, we were completely saturated with these pygmy ponytails on dudes. It’s as if they wanted his hairstyle but didn’t have the time or dedication to grow out an actual man bun, which is how we ended up with its bastard stepchild the top knot, to begin with. In April, the Awl had a photographer snapping the look on the wild on the streets of New York. Then there was the YouTube tutorial on how to make one, the BuzzFeed listicle about hot guys with top knots, and even a Tumblr called Guys with Top Knots devoted to…well, you get the picture.

That’s when the problems started. Stylish guys who had long hair to start with and the fashion sense to pull off such a hardcore look adopted the man bun early. But then the trend, as it always does, went too far. Now we have schlubs just putting an elastic in the back of the head without their hair cut to accentuate a top knot. Instead of looking hip, they look like they have a fuzzy pencil eraser hovering over their skull. Just because a guy’s hair is long enough to be gathered at one concentric point doesn’t mean it should be. Now we’re stuck with all sorts of bros with randomly pulled back hair looking like they’re trying too hard. The great thing about a man bun was it looked like the guy was barely trying at all. Nonchalance is the key to cool. This erroneously coiffed look is far too self-aware to inspire anyone.

Then there are the guys who don’t have enough hair yet but are still trying to jump on the bandwagon. You know them, the ones who wear the “nipple knot,” which is just like a little bump on the top of the head gathered up in a rubber band. It’s almost like these guys are trying to excise a growth from their scalp using an elastic.

These Johnny-come-latelys are ruining it for the top knot pioneers, who now look less like fashionable provocateurs and more like sleazy yoga teachers in bad rom-coms or, even worse, what is going to start passing for “hipster” at central casting in about two months. What used to be a look that showed a guy who was sensitive and unafraid to sport what could be considered a feminine affectation now looks like a douchebag who is trying to fit in with what men’s magazines are telling him the cool guys are doing.

Gyllenhaal advocated for his slimy character in Nightcrawler to put his hair in a man bun every time he did something “larcenous.” Now, people wearing this or similar styles are associated not with a chill guy who wears tank tops and gets all the ladies, but with a criminal who stages crimes so that he can sell news footage of them. Is that really the look we’re going for?

Two weeks ago, a group of South African hipsters (they self identify as the subspecies) created a viral sensation when they went around town cutting off the top knots of gentlemen in public. It was like marauding acts of tonsorial kindness. After 6 million views, the perpetrators admitted the video was staged and all the victims were friends of theirs. But, like Leto, were these willing victims just getting rid of style that had become so mainstream that it was now déclassé? Quite possibly.

Now is the time to liberate all the other straight dudes who are sporting top knots (gay guys are either too good for this trend or, like with most things, have adopted it and abandoned it far faster than the general public). Most of them are doing it wrong and, well, it just looks ridiculous. In 20 years this hairstyle will be like bell-bottoms or butterfly collar shirts, one of those things we look back on and shake our heads, saying, “Why did we ever do that to ourselves?” Don’t do it now. Don’t do it ever. In fact, do what Jared Leto did and put a stop to it before it’s far too late. Tell people your shorter cut is for a movie role, if that makes you feel any better. 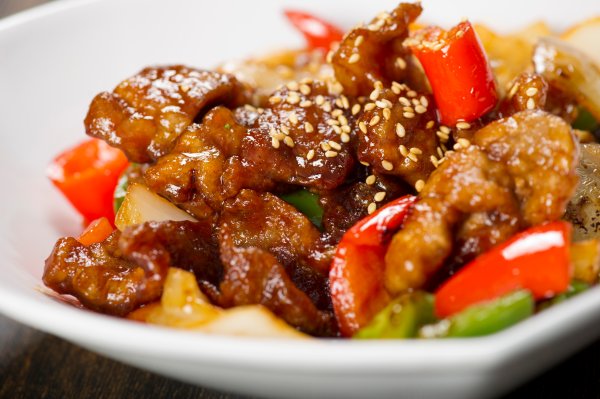 Your Chinese Menu Is Really a Time Machine
Next Up: Editor's Pick