Here's the Sculpture of Moses That Netanyahu Referenced

Architect of the Capitol
By Ryan Teague Beckwith

But for the close he went for an obvious pick: Moses.

“Facing me right up there in the gallery, overlooking all of us … is the image of Moses,” he said. “Moses led our people from slavery to the gates of the Promised Land.”

He then quoted Deuteronomy 31:6, Moses’ parting words to the Israelites, in Hebrew: “Be strong and resolute, neither fear nor dread them.”

Netanyahu was referencing a marble relief that has hung in the House chamber since 1950, just two years after the modern state of Israel was founded. The bas relief was sculpted of white Vermont marble by artist Jean de Marco, according to the Architect of the Capitol.

It’s part of a series of 23 portraits chosen to represent historical figures who established the legal principles underlying the American system of government. Moses is in the center, facing forward, with 11 portraits on either side facing right and left toward him.

Other portraits include Hammurabi, Pope Gregory IX and Thomas Jefferson. 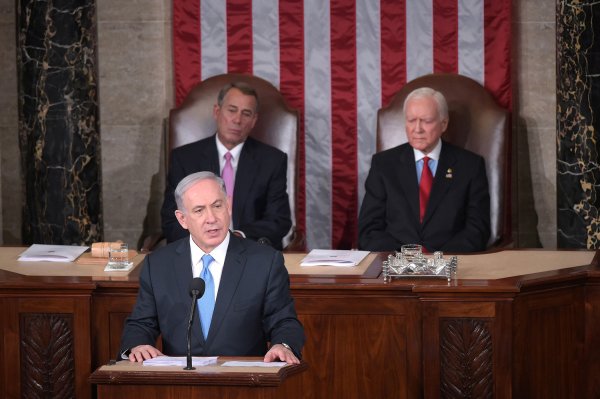 Netanyahu: 'This Is a Bad Deal'
Next Up: Editor's Pick