“Susan Rice has a blind spot: Genocide,” says the ad, which ran a full page in the New York Times Saturday. The ad says she “stood by” as genocide ravaged Rwanda in 1994 when Rice was a member of President Bill Clinton’s national security team and cites an article written by Samantha Power, the U.S. ambassador to the United Nations.

“I personally want to offer an apology to anyone who was offended by our organization’s ad about National Security Advisor Susan Rice,” said Boteach Monday before an event on preventing a nuclear Iran with Elie Wiesel and Texas GOP Sen. Ted Cruz. “Our disagreement with Ms. Rice is strictly over policy. It was construed by some as a personal attack that is certainly and absolutely not its intent.”

Boteach defended his ad just yesterday in an interview with CNN and his website still has a link to the ad on its homepage.

“We all have a blind spot when it comes to genocide,” said Boteach on CNN, listing those in Rwanda and Cambodia among others. “But she’s a public official … Now Iran is threatening the annihilation of the Jewish people. It is perverse that these negotiations are taking place without a demand that Iran first totally renounce their genocidal intent against the Jews.”

“Ms. Rice may be blind to the issue of genocide, but she should treat our ally with at least as much diplomatic courtesy as she does the committed enemy of both of our nations,” says the ad, which was paid for by Boteach’s This World: The Values Network.

The ad has been roundly condemned by Jewish organizations. The Anti-Defamation League called it an “incendiary personal attack” without justification. The American Jewish Committee called it “revolting.” The Jewish Federations of North America called it “outrageous.” After California Democrat Rep. Brad Sherman backed out of Monday’s event over “abhorrent” ad, Cruz bashed Democrats for their lack of participation.

“There is a simple reality right now which is that in Congress the number of congressional Democrats willing to stand up to this Administration on Iran is vanishingly small,” said Cruz. “For this gathering today, to be here with a Nobel laureate and morals hero like Elie Wiesel, we invited over a dozen Democrats.”

“There’s not a congressional Democrat sitting here being part of this discussion and that was not for lack of invitation, it was because the answer was no,” he added to boos from the crowd.

“We’re not here to boo anyone,” interjected Boteach, who later noted that there are “countless” Democrats who “strongly support” Israel.

Morton A. Klein, the president of the Zionist Organization of America, said he was with Sherman in his office today and said the Congressman was indeed “unhappy” about the ad. But Klein defended Boteach when asked about the ad’s intent linking Rice to genocide.

“Someone told me it made it seem that way,” said Klein. “Of course he didn’t mean that. That’s insane. So I don’t know. I didn’t read it but I’m very careful with my ads. Maybe he’s less careful.” 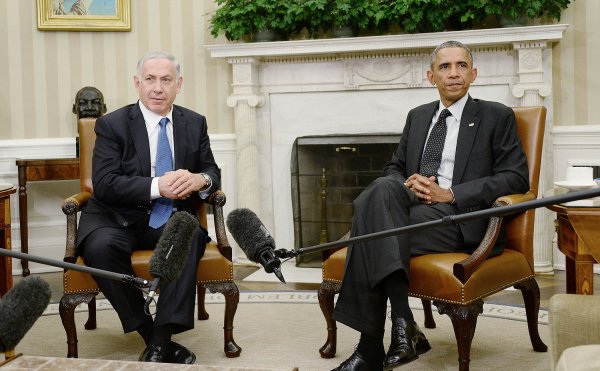 Why Bibi and Barack Can't Get Along
Next Up: Editor's Pick