Protesters hold up their hands and signs on Feb. 21, 2015, during a protest stemming from the officer involved shooting death of Antonio Zambrano-Montes
The Tri-City Herald, Andrew Jansen—AP Photo
By Kate Brown

For the past few weeks Mexican-Americans have been protesting against police violence in Pasco, a rapidly suburbanizing farm town along the Columbia River in what is known as the tri-city region of eastern Washington State. On Feb. 10, an orchard worker, Antonio Zambrano-Montes, threw rocks at Pasco police and then ran away. Video of the scene appears to show that three officers pursued him, and when Zambrano-Montes turned with his hands up to surrender, they opened fire.

The New York Times and other newspapers have related the Pasco protests to the Ferguson “Hands Up” protests. The killing of Zambrano-Montes—the fourth fatal police shooting in six months by Pasco police, though the first with a Latino victim—triggered anger among the Latinos who make up more than half of Pasco’s population, because they complain that they have little representation in the local government or police force. But there is more to this story than one death. The anger has been building for generations, in part because the marginalization of minorities in Pasco has a long history.

Mexican-Americans were initially hired onto construction jobs to build the Hanford plutonium plant in 1944 for the Manhattan Project. Though Pasco is some 60 miles from the Hanford plant, Mexican-Americans settled there because they were not allowed to live on site in the large construction camp, nor in nearby Richland, specially constructed in 1944 to house white plant operators. Instead, they resided in dorms, shacks and trailers in what was known as the Pasco ghetto, where migrant black workers also settled.

As construction wound down, Washington Governor Arthur Langlie worried about the “danger” of “irresponsible workers” disregarding local law. He went to see the Army Corps project director, Frank Matthias. Mathias grasped Langlie’s concerns. He wrote in his diary, which is now stored in the Department of Energy archives, that in Pasco “something would have to be done to avoid a concentration of undesirables.” He and the Governor worked out a plan to terminate workers from the massive construction site who were no longer needed, “particularly the negroes,” and Matthias ordered troopers to Pasco to help disperse “vagrants” and unemployed drifters.

Matthias had chosen Hanford for plutonium production because it was a struggling farm region with few people and even less money. After the war, however, the Hanford plant attracted an impressive spread of federal grants and subsidies—during the ’50s, it got more than any other congressional district in the country. The money poured in not only for nuclear weapons, but also for hydroelectric dams on the Columbia River, army and naval bases, irrigation networks, farm subsidies and “national defense” highways. Hopeful workers followed each injection of federal money.

As the region grew, the housing patterns established during the war continued in the tri-cities. Kennewick remained a sundown town; the sheriff was infamous for his zeal in enforcing ban on non-whites after dark. The federally-owned Richland was reserved for workers at the Hanford Plant, and plant managers hired only a handful of black and Latino plant employees in the ’50s. East Pasco, a scatter of shacks and trailers by the rail yards with no garbage collection, water or sewer lines, persisted as the only neighborhood open to minorities. In the rest of Pasco, non-whites could not get loans for housing, and most restaurants, hotels and shops posted “Whites Only” signs in the windows. Jobs in construction, which attracted minority workers, paid less and suffered from frequent downturns and lay-offs. The East Pasco community remained transient and impoverished. Poorly policed, East Pasco also became a magnet for bars and bordellos, and with them drunken brawls, theft, drug abuse and assaults.

In the late 1940s and early ’50s, the Tri-City Herald was based in Pasco. Its publisher, Glenn Lee, was one of the most litigious newspapermen in the country. Lee worried that white residents were moving out of Pasco. He wanted to secure his real estate investments before the city was tagged as “blighted” and so ineligible for federally subsidized housing loans, which kept real estate values afloat. In his newspaper, Lee whipped up animosity against “fugitives” and “gamblers” and campaigned to clear the Pasco ghetto. As I discovered in researching my book Plutopia, he encouraged the Pasco sheriff to conduct nighttime round-ups of non-White residents for vagrancy, illegal cohabitation and other vaguely defined crimes. Pasco’s prosecutor, William Gaffney, however, refused to charge citizens arrested in the sheriff’s raids, so Lee started a media campaign against Gaffney that ended in Gaffney’s removal and a lawsuit between the two of them. Lee eventually gave up his struggle to cleanse Pasco and moved his paper across the river to Kennewick.

Generous federal subsidies continued in the following decades to produce starkly different realities for the communities surrounding the Hanford plant. Richland earned the designation of a “Critical Defense Area,” worthy of extra federal spending. Kennewick became the local retail center, as shopping malls spread throughout its curved and genteel postwar suburbs. Meanwhile, large stretches of Pasco gained the financial designations of “blighted” and “risky” for federally approved housing loans. Richland and Kennewick remained overwhelmingly white, while Pasco persisted as the home for African Americans and, increasingly after the 1970s, Latinos.

In 1942, before the Manhattan Project, all three towns had been equal in their demographic composition and economic misery. In the postwar decades, federal policies, discriminatory hiring practices and selective policing changed that. Richland and Kennewick became prosperous middle-class communities, while crime, poverty and substandard housing sent Pasco on a downward spiral. Race and poverty, in other words, coalesced to create patterns that endured for generations. In the tri-cities in 2010, 18% of minority homebuyers had to purchase high-interest housing loans, as against 1.8% among the region’s White consumers. This postwar legacy is not unique to eastern Washington. The tri-cities reflects most American urban landscapes, where federal housing, banking and educational policy have created communities that are divided and fearful of one another.

The Pasco protests have been equated to the Ferguson and New York campaigns against police violence. When police complain they are demonized for doing their job, they are right. That’s because policing crime and violence often means policing the deeply structural, but largely invisible, borders that nurture inequities. Pasco’s history shows how in eastern Washington, as in the greater St. Louis and New York, American law enforcement has long served on the front lines, upholding not just law, but order, which often means maintaining boundaries between communities segregated by race, class and opportunity.

Kate Brown lives in Washington, DC and is Professor of History at UMBC. She is the author of several award-winning books, including Plutopia: Nuclear Families in Atomic Cities and the Great Soviet and American Plutonium Disasters (Oxford 2013). Brown’s most recent book Dispatches from Dystopia: History of Places Not Yet Forgotten will appear in April 2015 with the University of Chicago Press. 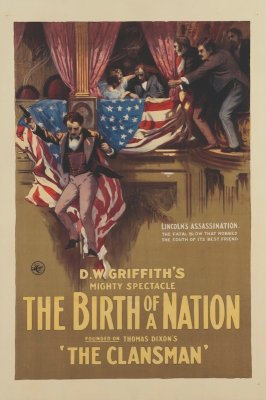 The Birth of a Nation 100 Years Later: Still Great, Still Shameful
Next Up: Editor's Pick