While every other comedian — from Tina Fey to Amy Poehler — is writing a memoir, Ansari decided he’d team up with a sociologist to conduct studies on love in the age of technology for his first title. The comedian revealed his book cover exclusively to TIME and chatted about his research, his stand-up and the end of Parks and Rec.

TIME: A lot of people were surprised when you announced that as a comedian you were writing a book that takes a more academic look at modern romance. Why did you decide to write a book about love?

Ansari: I had been starting to do this stand-up about dating and realized that the current romantic landscape is way different. All these very modern problems — like, sitting and deciding what to write in a text — that’s a very new conundrum.

Then I randomly met a couple people who were in academic fields that did work that vaguely applied to this stuff. Like, this woman Sherry Turkle who had done all this research about texting and found that you say things over text you would never say to someone’s face. So the medium of communication we’re using is kind of making us sh—ttier people. And then I thought if you take that and put it toward romantic interactions, that’s why people are so f—ing rude.

That ended up helping me write this bit I was working on for my stand-up. But I thought it would be kind of interesting to take my point of view and a conversation with someone from an academic field and put that together. If I could do that as a book, I would be able to go deeper into this area than I can in my stand-up.

So this won’t be a celebrity memoir.

Right. It ended up being a sociology book that has my sense of humor, but it also has some academic heft to it. I wrote it with this sociologist, Eric Klinenberg, and he helped me design this huge research project that we did. We interviewed hundreds of people all across the world — we went to Tokyo and Paris and Wichita to really get a wide scope. We also interviewed all sorts of academics. The resulting book is really unique. I can’t think of any book I would really compare it to.

How have texting, dating apps and other technology changed the way we think about love?

I want to be clear: The book is not, “It’s crazy! We have phones now!” The changes are far beyond the technology. I interviewed all these older people and talked to them about relationships. People back in the day would just marry people who lived close to them. There was this study done in Philadelphia in 1932 that found that ⅓ of couples that got married live within a 5 block radius of each other. ⅙ lived in the same block. And ⅛ lived in the same building!

This was true in all different cities. Think about it: You didn’t go to college. You weren’t going out and meeting people from different parts of the country and parts of the world. You were just kind of hanging out in your neighborhood. And now they don’t even do those studies anymore. It wouldn’t even make sense. Like, my girlfriend is from Texas. I’m from South Carolina. Nobody is marrying someone who lived in their building. That’s crazy.

And marriage, not that long ago, was an economic institution where two families would come together to bring their wealth together. The whole idea of finding a soul mate only became a thing in the past 100 years. So the whole redefinition of what marriage is — nobody’s really written this comprehensive book about this kind of thing. I think it’s really funny and very interesting.

Did you find that people treated love the same way outside of the U.S.?

We went to Tokyo and France and Buenos Aires to interview people. Japan is in the middle of this weird crisis right now where people aren’t dating or getting married, and the government has had to step in. Then Buenos Aires was the opposite of Japan. In Japan, there’s this problem of the herbivore man — these guys that aren’t interested in sex or dating — and Buenos Aires was the other end where they’re notoriously sexual aggressive and have had issues with that stuff. I think it gives the book more scope.

Did you reach any surprising conclusions?

You just realize everyone is dealing with the same nonsense. Everyone is on this boat together, and it would probably be good if we were a little nicer on that boat.

In both your last stand-up special, Buried Alive, and your upcoming special, Aziz Ansari: Live at Madison Square Garden, you ask people in the audience about their love lives — sometimes reading text message exchanges. How do you know that’s going to be funny when this complete stranger is handing over their phone?

I did that probably 100 times when I was on tour, and every time it was good because it’s real, and we’ve all been there. We all can relate to this embarrassing situation we find ourselves in. Even if you’re older and weren’t texting when you were dating, you’ve had some version of going up to someone and having this awkward situation.

We did something similar in the book. We had people give us their phones and would look at real text messages and online dating correspondences, and then we would ask them, “What were you thinking when you got this or sent this?” That was so fascinating.

A lot of people probably know your stand-up from your viral R. Kelly or Kanye West bits. But in your last tour, you did fewer jokes about celebrities and more personal and political material. And soon you’ll have this sociology book. Do you feel like you’re redefining your comedy?

My first special came out when I was in my early 20s. I’m 32 years old now, so I’ve just grown up as a person. I have more life experience, I’m going through different things. The guy who’s 23 couldn’t have written this book or written the jokes in my new standup special. He just hadn’t lived that life yet. Any artist I’m into — music or comedy — they’re constantly evolving and changing what they do.

Recently you talked on David Letterman about how the dictionary definition of “feminist” is someone who believes in the social, economic and political equality of the genders — which is an idea most people agree with. And yet so many people won’t call themselves “feminists.” Why do you think that is?

I think people have lost sight of what the word actually means. When you look at the definition, it’s a very hard tenet to disagree with. It became this charged word that has been altered by the way it’s used in the media. But the actual definition is a cause that I think everyone should get behind and most people would get behind.

It got picked up by a lot of blogs. Do you do bits like that with the goal of inciting conversation and change?

I talk to other comedians about this. When you do those talk shows as a comedian, you’re in a very interesting position. Comedians can kind of talk about anything, as long as they make it funny. If I was just an actor and wanted to talk about that, it would be a little bit more difficult. So I want to talk about whatever is interesting to me. Then if it spreads around, that’s great.

I talked to a friend of mine who was like, “I was leaving one of your stand-up shows, and people were talking about things you discussed like immigration and feminism and the food industry.” That’s really cool. If you leave a show and it’s making you think about things, I love to hear that.

Parks and Recreation wrapped up last week. How do you feel about it ending?

We all grew to really love each other — the cast and the crew and everyone. It was just such a good group of people. I know people say that about a lot of shows, but I feel like if you talk to people who guest starred on the show, they would say there was something special about that group.

If you get people who are nice and care about each other and have fun doing their jobs, the work will be great. I’ve been on other sets where people aren’t as cool or don’t get along or are mean to people and yell at people. That stuff never works. I want to carry that lesson with me—just respecting people—to my future projects.

Would you consider doing another TV show? 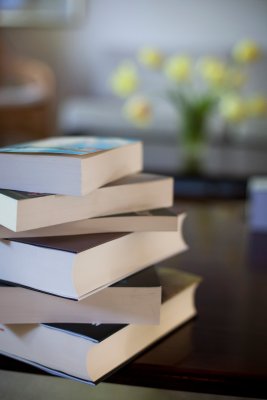 What I Learned by Adding Diversity to My Reading List
Next Up: Editor's Pick