Jeb Bush made headlines Friday when he used wit to parry the boos of college-age conservatives at a conference outside Washington, D.C. “For those who made an ‘ooo’ sound — is that what it was? — I’m marking you down as neutral and I want to be your second choice,” he told the crowd, in what sounded like a prepared line.

But the moment may not have been the most consequential conservative test he passed last week. Just a day earlier, Bush addressed and largely won over a crowd of strict fiscal conservative donors off camera and thousands of miles away at a gathering of wealthy donors at a Club for Growth confab in Palm Beach, Fla.

David McIntosh, the group’s president, who interviewed Bush on stage, said his members, who tend to be wealthy fighters for strict fiscal conservatism, had been wary before Bush appeared, wondering who they would meet, “the old Governor or a new Bush,” a reference the raw feelings many conservatives still have against Jeb’s father and brother, who both enraged conservatives during their administrations.

But Bush made a forceful case for himself, McIntosh said. “I got to be governor of this state — this purple state, this wacky, wonderful state — for eight years,” Bush told the group, according to an account from the Washington Post. “I ran as a conservative, I said what I was going to do, and I had a chance to do it. And trust me, I did.” By the time it was over, McIntosh was all praise. “Bush impressed people,” he said.

That seal of approval could prove huge dividends as the establishment frontrunner works to avoid a movement backlash to his nascent presidential effort. The man who once said Republicans should “lose the primary to win the general election” is nonetheless aiming to establish his credentials in a way that minimizes the ideological protest against his candidacy from the right. But the fight is far from over. Other conservative activists have been far more skeptical. Grover Norquist, who runs another fiscal conservative group, Americans for Tax Reform, has been critical of Jeb Bush for refusing to sign his pledge, during his gubernatorial campaigns and now, to oppose all increases in taxes.

“My concern is that he has not made a commitment to the American people that he will not raise taxes when all the other candidates have done so,” Norquist said at the Conservative Political Action Conference outside Washington. “I think Jeb will take the pledge at the end of the day because both his father and his brother said ‘I don’t know’ and then when they realized what the pledge was and what it actually meant and that it was a pledge to the American people and not to me or Americans for Tax Reform, and that they had no intention of raising taxes, and that everyone else was doing it, they said yes, absolutely.”

Bush has so far refused to budge, and on Saturday his spokesman dismissed Norquist’s organization as just another “lobbying group.” “If Governor Bush decides to move forward, he will not sign any pledges circulated by lobbying groups,” Bush spokeswoman Kristy Campbell, told ABC News. President George H.W. Bush famously signed Norquist’s pledge and then broke it by supporting a tax increase as part of the 1990 budget, a move that hurt his reelection effort in 1992. President George W. Bush signed and honored the pledge as president, and his White House worked closely with Norquist to rally support for tax cuts in his first term.

One reason for Jeb Bush’s reluctance may be his desire to strike a bargain to reform entitlements if he became president. In 2012, he said in a congressional hearing that he would accept a theoretical deal to raise $1 of tax revenue for every $10 in spending cuts, a position that had been rejected by that year’s Republican presidential contenders, in large part because of Norquist’s pledge.

Like Norquist’s group, the Club For Growth also has a reputation for taking a hard line against any candidate who either raises taxes or leaves the door open to tax increases. But so far this cycle, there are no signs that the Club will target Bush. In 2008, the Club for Growth played an aggressive role in opposing Mike Huckabee’s presidential campaign, attacking him for some tax increases he pushed as governor of Arkansas. In 2012, the group released research papers on the candidates, but did not spend money or offer endorsements in the primary. This year, the group could be more agressive. “There is no decision on an endorsement,” McIntosh said.

But Bush is not seeking an endorsement as much as a lack of opposition. If the Club simply concludes that Bush can be seen in the same category as other Club for Growth favorites, including Ted Cruz, Scott Walker and Rand Paul, that would be victory enough for his presidential effort. 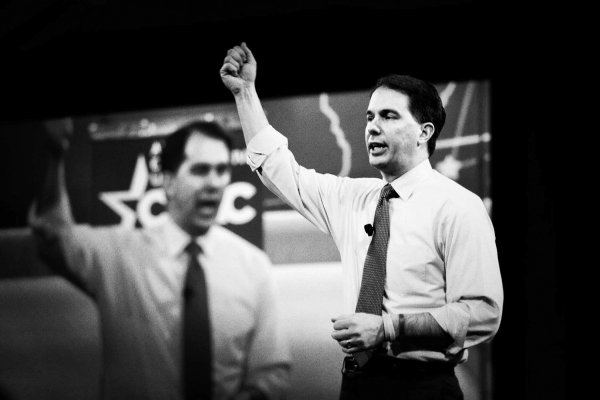