Israeli Prime Minister Benjamin Netanyahu arrived in Washington, D.C., on Sunday for a controversial visit that the leader described as “a fateful, even historic mission.”

Netanyahu, who is seeking re-election this month, will address Congress on Tuesday to express his opposition to a possible nuclear deal with Iran — a speech President Barack Obama’s top national-security aide has said will be “destructive” to U.S.-Israel relations.

The visit has further strained relations between Israel and the Obama Administration, which was not consulted before House Speaker John Boehner invited Netanyahu to address Congress. Obama is not planning to meet with Netanyahu while he’s in town, and a few dozen Democrats are expected to boycott the speech, which has been criticized as interference in Israeli politics just two weeks before an election.

The planned speech, National Security Adviser Susan Rice said Tuesday, has “injected a degree of partisanship, which is not only unfortunate, I think it’s destructive [to] the fabric of the relationship.”

Secretary of State John Kerry sought to cool the tensions a bit over the weekend, first in a phone call with Netanyahu on Saturday and then in comments Sunday, when he said the Israeli leader is “welcome to speak in the United States, obviously,” and that the Obama Administration doesn’t want the speech to become “some great political football.”

“Obviously it was odd, if not unique, that we learned of it from the speaker of the House and that an Administration was not included in this process,” Kerry said on ABC’s This Week. “But the Administration is not seeking to politicize this.”

Netanyahu’s camp also tried to lower the temperature. “We are not here to offend President Obama, whom we respect very much,” an aide told the Associated Press.

As he left for Washington, Netanyahu reiterated his opposition to a deal over Iran’s nuclear program. He is set to speak Monday at the annual conference for the American Israel Public Affairs Committee, or AIPAC, the powerful pro-Israel group.

“We are strongly opposed to the agreement being formulated between the world powers and Iran that could endanger Israel’s very existence,” Netanyahu said. 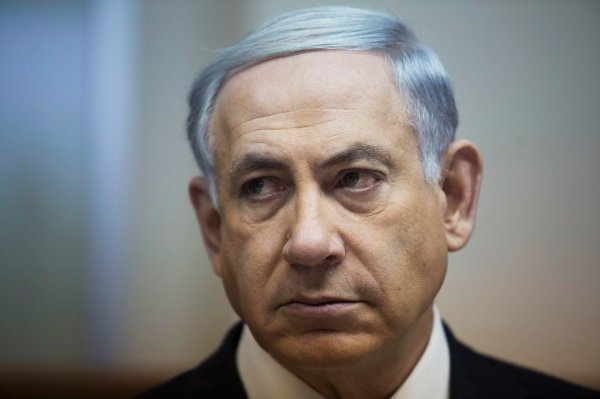 Netanyahu Says World Has 'Given Up' on Iran Nukes
Next Up: Editor's Pick