CPAC: 12 Takeaways as the GOP Presidential Race Takes Off

There’s still a straw-poll winner to announce, but the biggest story lines at this week’s Conservative Political Action Conference have already unfolded. Here are the 12 big takeaways from the annual gathering:

Wisconsin Governor Scott Walker kept the momentum alive. Riding a wave of fresh support after his Iowa debut last month, Walker was the talk of the conference and emerged even stronger despite a dustup over his comparing union protesters to ISIS fighters.

The hawkish GOP is back. The rise of the Islamic State of Iraq and Greater Syria (ISIS) has tempered the dovish streak percolating within the party, as speaker after speaker advocated a more muscular approach to fighting the terrorist group.

That could spell trouble for Rand Paul. The Kentucky Senator is still a CPAC favorite and a force in the party, but one of the pillars of his appeal may be eroding.

Former Florida governor Jeb Bush can handle the base. In a lively question-and-answer session, Bush found his footing after an uneven start and managed to escape unscathed. “That was raucous and wild,” he told supporters after, “and I loved it.”

New Jersey Governor Chris Christie did what he had to do: convince donors and voters alike that he’s still alive and kicking in the GOP nominating fight. No one was expecting a barn burner from the moderate governor at CPAC, but he showed some familiar fight in a tough interview with radio host Laura Ingraham, peppering his answers with shots at the media and his 2016 opponents.

Republicans haven’t figured out how to prosecute former Secretary of State Hillary Clinton’s economic priorities. Speaker after speaker tied her to Obama’s foreign policy record, but mentions of her domestic agenda—and President Obama’s—were rare and disjointed.

Former HP CEO Carly Fiorina had another strong performance, showcasing her willingness to forcefully criticize Clinton. Fiorina has no natural constituency or discernible path to the nomination, but her ability to play Hillary’s foil positions her for success on the debate stage and could lift her to a spot on the veep short list or a Cabinet position if Republicans win the White House.

Moderators matter. The GOP is determined to mitigate the mainstream media’s impact on the nominating process, but CPAC showed that tapping ideologues to quiz the candidates carries its own problems. Fox News personality Sean Hannity served up softballs and cracked wise about former President Bill Clinton’s womanizing, while radio host Laura Ingraham laid bare her own biases by lambasting Bush and pushing Christie to do the same.

Sarah Palin can use her for talents for good. The former Alaska governor has long drawn eye rolls and sighs from Republicans for her fake flirtations with the presidency and outlandish or sometimes incoherent statements. But at CPAC, Palin delivered a substantive, impassioned speech on veterans issues that called on both parties to address the needs of those returning from war.

The First Amendment only goes so far. Duck Dynasty star Phil Robertson received a First Amendment Award for speaking about his faith. But the bearded reality-TV personality blew through his allotted time limit, uncorking such a long, rambling speech that the CPAC organizers had to cue up music to drive him offstage.

Texas Senator Ted Cruz will run a populist, anti-Washington campaign that juxtaposes his principled stands in the Senate with the waffling of his rivals. That should make him a force in Iowa, but he still hasn’t shown how a zealous base will give him the math needed to win the nomination in this field.

Rick Santorum is the Republican Rodney Dangerfield. The former Pennsylvania Senator carried 11 states in the 2012 nominating contest, finishing second to Mitt Romney. It was an impressive feat—yet he still gets no respect from the base, who filed out of the CPAC ballroom en masse during Santorum’s speech on Friday. 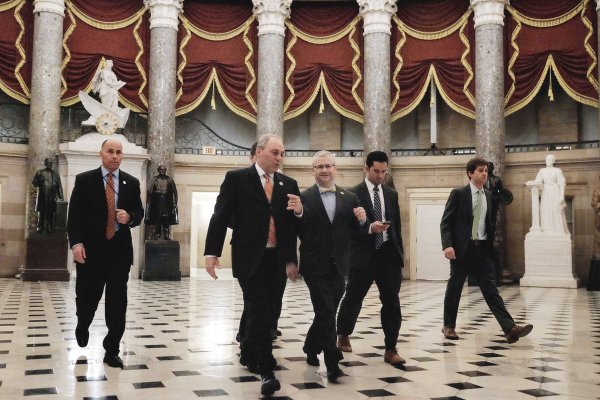 Congress Averts Partial Government Shutdown, For a Week
Next Up: Editor's Pick