Senator Rand Paul, a Republican from Kentucky, listens to a question during an interview at the Conservative Political Action Conference (CPAC) in National Harbor, Maryland, Feb. 27, 2015.
Andrew Harrer—Bloomberg/Getty Images
By Noah Rayman

Bulgaria has a bone to pick with Rand Paul.

The country’s Embassy in Washington hit back Friday at comments the Republican presidential hopeful made earlier this week, in which he seemed to dismiss the country’s importance while mounting an attack against Hillary Clinton.

“It goes without saying that Senator Rand Paul’s remark is inappropriate,” the Bulgarian embassy in Washington told TIME in a statement. “His dismissive attitude towards a US and NATO ally and a friendly country and his foreign policy record is to be judged by the American people.”

Paul on Wednesday reiterated his criticism of the former Secretary of State for not paying more attention to the situation on the ground in Libya ahead of the September, 2012 attack on a Benghazi compound that killed U.S. Ambassador Chris Stevens and three other Americans. Clinton has said she didn’t read a diplomatic cable requesting increased security at the compound.

“I could expect her not to read the cables from Bulgaria,” Paul told Yahoo on Wednesday. “But absolutely it’s inconceivable she didn’t read the cables coming from Benghazi.”

Bulgaria had kinder words for Clinton.

“Not that long time ago Secretary Clinton was on an official visit to Bulgaria,” the embassy added, referring to a 2012 visit by the now-presumptive Democratic presidential front-runner. “She stays engaged with us and is very well aware of the geopolitical realities of the region.”

Paul’s campaign declined to comment Friday on the Bulgarian embassy’s statement. He has long seized on Clinton’s tenure at the State Department and the Benghazi attack in particular as fodder for criticism and to tout his anti-interventionist, libertarian foreign policy ahead of a likely presidential run. Last year, for example, he came out swinging at a talk in Kentucky by pointing to the State Department’s spending bill on embassy décor.

“They spent $700,000 on landscaping at the Brussels embassy,” he said in August. “They spent $5 million on crystal glassware for the embassies around the world.”

The Bulgarian embassy said Paul could benefit from its foreign policy counsel.

“Among EU and NATO Member States Bulgaria is one of those standing closest to the major regional and global security challenges of today,” the statement said. “In this context the information coming from the American Embassy in Sofia might be more than useful to anyone striving to responsibly shape US foreign policy.” 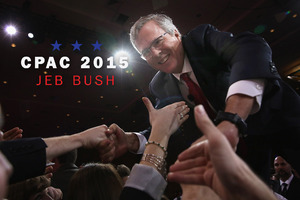 Real TIME: Jeb Bush Takes On Conservatives At CPAC
Next Up: Editor's Pick