In the first pitch of his unofficial campaign to the GOP grassroots activists, Jeb Bush cast himself as a full-spectrum conservative who was in sync with the party’s base on economic, social and foreign-policy issues.

Describing himself as a “practicing, reform-minded conservative,” Bush made a game effort to ingratiate himself with Republicans who are leery of a third Bush presidency. Still, he encountered a raw dose of the disappointment that still lingers around the Bush brand.

Speaking on a low stage in a jam-packed ballroom split between hostile opponents and backers bused in from D.C., Bush drew a raucous mix of cheers, boos and intermittent heckling. “I’m marking them down as neutral,” Bush joked of the booers, “and I want to be your second choice.” A small number of opponents staged a walkout during the speech. Outside, costumed activists started a chant of “No More Bushes!”

The reception appeared to rattle Bush during the first minutes of his question-and-answer session with Fox News commentator Sean Hannity, but the former Florida governor recovered quickly to enumerate the merits of his record.

Bush defended his support of Common Core education standards. “The federal government has no role in the creation of the standards,” Bush said. He noted that as governor, he championed school vouchers and ended affirmative action in the Sunshine State’s public universities.

Tackling the other main policy obstacles looming in the GOP primary contest, Bush blistered President Obama’s executive orders on immigration as an overreach that he would reverse as president. “The courts are going to overrule that,” he said. Asked how he would’ve handled the tide of unaccompanied minors who arrived at the southern border last summer, Bush said they should have been sent home. Defending his call for comprehensive immigration reform, he said there should be a path to citizenship for undocumented immigrants. “The simple fact,” he said, “is there is no plan to deport 11 million people.”

Citing his record amassed as the former two-term governor of Florida, Bush sought to rebut the “moderate” tag that critics have applied. “It’s a record that may be hard for people to imagine,” he said, “because it’s a record of getting things done.”

Bush painted himself as a fiscal conservative who slashed taxes, grew the economy at a faster rate than the rest of the U.S., left his successor with a $9.5 billion rainy day fund and issued so many line-item vetoes that his opponents dubbed him “Veto Corleone.”

Like other potential presidential candidates at CPAC, Bush laid out a muscular foreign policy position that reasserted America’s place in the world. “This total misunderstanding of what this Islamic threat is is very dangerous,” he said, adding that “the American people are going to reject what President Obama is trying to do with Iran.”

Bush suggested he was in step with movement conservatives on social issues as well. Responding to a Hannity question, Bush said he had no regrets about his reaction to the Terri Schiavo controversy, and noted he was a pro-life governor who believes in “traditional marriage.”

Democrats hammered Bush for the remarks, noting he has cast himself as a rare Republican candidate capable of bridging the party’s deficit with Latino voters. “Jeb Bush isn’t a new type of Republican, and he certainly isn’t looking out for everyday people in America,” said Democratic National Committee spokesman Ian Sams. “Instead, he’s the same Jeb Bush who, as governor, supported slashing funding for urban schools and higher education, while giving massive tax cuts to the wealthy and big corporations. Bush may say he can bring Latino voters into the GOP fold, but with priorities like these, that’s really hard to imagine.”

After Bush’s remarks, hundreds of supporters waited in line for a closed-press reception with the former governor. Aides handed out red “Jeb ’16” T-shirts and baseball caps. To enter the event, supporters were required to register their contact info with Bush’s Right to Rise political-action committee.

Bush took the microphone at the event to the theme song from “Rocky.” Of the question-and-answer session, he said “that was raucous and wild and I loved it.” He then argued for expanding the Republican tent: “There are a lot of conservatives out there in America who just don’t know it yet.” 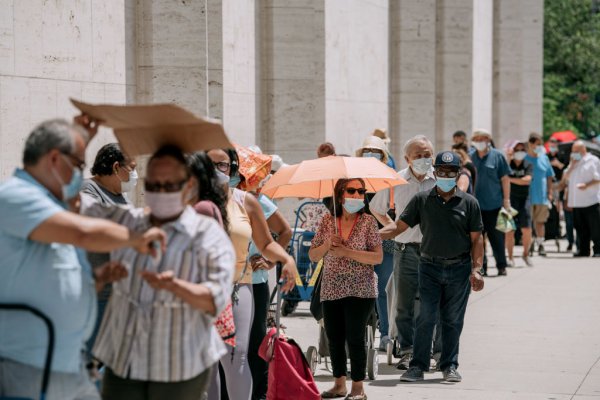 No, the Recession Isn't Over
Next Up: Editor's Pick