He Was the Cosmos: How Leonard Nimoy Made Spock a Mystical Force

As an acting challenge, Mr. Spock was—to borrow an adjective from the Enterprise’s science officer himself—a curious one: a central figure in a drama whose chief characteristic was not showing emotion. And yet he became the character that Star Trek‘s audience loved most of all. That owes much to his creator, Gene Roddeberry, of course, but also to Leonard Nimoy, who died Feb. 27 at age 83, who invested into Spock every ounce of his own humanity.

Though Spock was the embodiment of logic—the counterweight to swaggery Capt. Kirk and hotheaded Bones McCoy—Nimoy himself felt a spiritual, mystical bond to the alien character. Nimoy created Spock’s signal gesture, the Vulcan salute, from the Jewish priestly gesture that represented the letter shin, and thus the name of the Almighty. (Nimoy was born to Orthodox parents in Boston and witnessed the blessing himself as a child.)

This choice meant a lot: in the hands of another actor, Spock’s rigid reserve might have played as an absence—the cold nothingness of logic in place of human heart. As Nimoy interpreted it, it was a presence, the suggestion of greater currents of wisdom beyond the electrical jolts our hearts and brains pump out.

Combined with Nimoy’s mellifluous voice and wry stage presence, this gave Spock a kind of hipster beat-poetry character that was oddly in step with the times in the fiery, spiritually questing ’60s. The idea of subordinating one’s own passions to the larger universe was a spiritual idea that goes beyond any particular religion, even beyond religion itself. Part of the reason Spock’s counsel was so effective was not just his intelligence, loyalty and logic, but his ability to see beyond the ego—the self-subjectivity that drove Kirk—to focus on a larger and more eternal whole. (Or as he put it in his death scene in the film The Wrath of Khan: the needs of the many outweigh the needs of the few—”or the one.”)

To say that Spock had no emotion wasn’t true. He was in fact part-human, constantly wrestling to keep his emotion in control. This gave drama to his very being, and Nimoy, with his careful cadence, showed how being Spock was a job that required constant mental effort. Watch clips of Star Trek, and you quickly see that Nimoy’s performance is in fact full of emotion: there are knowing smiles, rapt pauses of concentration, deliberate speeches that play musically like prayers. What Nimoy did was to strip his performance not of emotion, but of “feelings”—the little flailings of affect that most actors (and non-actors) rely on.

The cliché is to say that this made Spock “more human than any of us,” but again, he after all was partly human in ancestry. He occupied a space between us and the purely alien, giving us perspective on ourselves. That job, honestly, probably required an actor who was himself a bit of an eccentric, in the best, unashamed way; beyond his acting work, he recorded music and spoken-word albums and composed free-verse poetry. Artistically as well, he was an explorer.

Many actors who become so wholly identified with single characters spend a lifetime running away from them. Not Nimoy, who embraced Spock (and reprised him many times) and welcomed the hold the character had on generations. And why shouldn’t he have? In his quizzical alien, he created something bigger than himself, a figure of friendship, mindfulness and understanding that, long after Leonard Nimoy is gone, will keep spreading ripples across the universe. 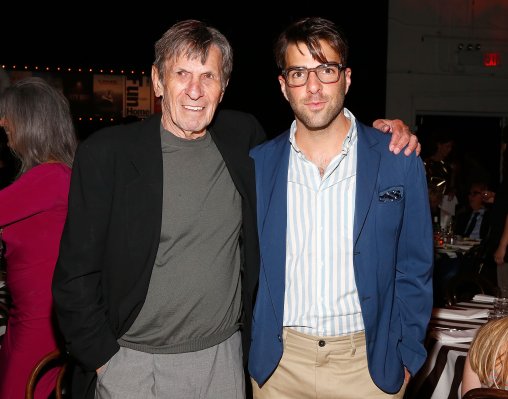 This Is How the New Spock Said Goodbye to the Old Spock
Next Up: Editor's Pick