Bill Cosby Says His Career Is 'Far From Finished'

Bill Cosby says his career is not finished.

The comedian, 77, has canceled numerous shows amid the sexual assault allegations made against him by more than a dozen women. But he is scheduled to perform at a Louisiana venue on Friday, and issued a written statement thanking the performing arts center and fans for welcoming him:

“Dear Fans: For 53 years you have given me your love, support, respect and trust. Thank you! I can’t wait to see your smiling faces and warm your hearts with a wonderful gift – LAUGHTER. I’m ready! I thank you, the theatre staff (Heymann Performing Arts Center), the event organizers and the Lafayette community for your continued support and coming to experience family, fun entertainment. Hey, hey, hey – I’m far from finished.”

Cosby and his legal representation have continued to deny all claims, while also lashing out at the media for publicizing “decades-old events” that are “completely illogical.”

Some celebrities have weighed in on the scandal, including talk show host Jay Leno – who said he did not understand why “it’s so hard to believe women” – and fellow comedian Eddie Murphy, who opted not to impersonate Cosby during the Saturday Night Live 40th Anniversary Special.

“Eddie decides the laughs are not worth it. He will not kick a man when he is down,” fellow SNL actor and “Weekend Update” host Norm Macdonald explained on Twitter a few days after the special aired.

Cosby’s statement was first received by the AFP.

The Heymann Performing Arts Center did not immediately respond to PEOPLE’s request for comment. 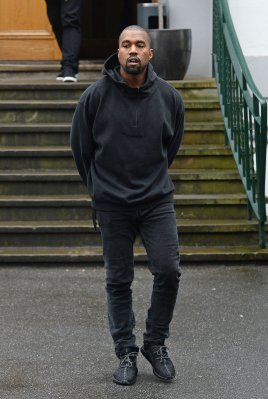 Kanye West Says Sorry to Beck and Bruno Mars
Next Up: Editor's Pick