Sybrina Fulton and Tracy Martin – the parents of Trayvon Martin – paid a visit to the White House to honor the third anniversary of their son’s shooting.

They joined President Obama and First Lady Michelle Obama for a special reception in recognition of African American History Month on Thursday, during which the President thanked the Martins for their attendance “on what’s a very difficult day for them.”

“Today, on the third anniversary of Trayvon Martin’s death, showing all of our kids, all of them, every single day, that their lives matter, that’s part of our task,” President Obama said. “Where we are today didn’t come easy. It came through thick and thin.”

The couple’s 17-year-old son was shot and killed on Feb. 26, 2012, after a confrontation with George Zimmerman, who was acquitted of second-degree murder charges in the teenager’s death the following year. It was also reported this week that the Department of Justice is set to announce it will not be filing charges against Zimmerman in the shooting of the unarmed teen.

Obama also emphasized to the audience in the East Room, including congresswomen Sheila Jackson Lee and Nancy Pelosi, the importance of African American History Month. He explained that annual commemoration is not to “isolate” or “segregate” or to put African-American history “under a glass case.”

He continued, “We set [the month] aside to illuminate those threads.”

In addition to acknowledging Martin’s death, the President also addressed another topical event, the 1965 march from Selma, Alabama, led by Martin Luther King Jr., that is depicted in the Oscar-nominated film Selma. 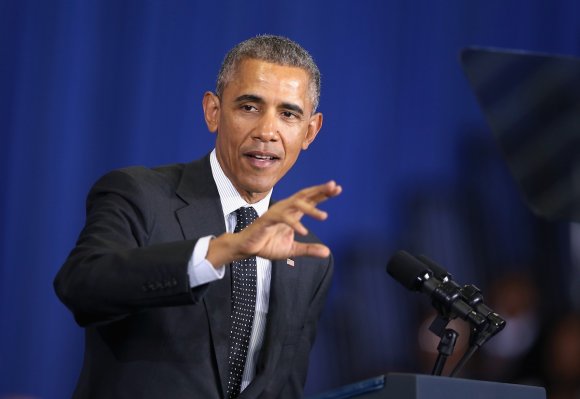 Obama Thanks Redditors After Net Neutrality Approval
Next Up: Editor's Pick