Wisconsin Gov. Scott Walker brought the red meat to the conservative grassroots audience at the Conservative Political Action Conference, but his address was short on substance about what he hopes to do should he be elected president.

The all-but-certain Republican presidential hopeful sharply criticized the Obama administration’s foreign policy, but when asked about how he would deal with the threat of the Islamic State of Iraq and Greater Syria (ISIS), dodged.

“For years I’ve been concerned about that threat,” Walker said, saying he received security briefings from the FBI and his adjutant general. “I want a commander-in-chief who will do anything in their power to ensure that the threat of radical Islamic terrorists do not wash up on American soil.”

“If I can take on 100,000 protestors, I can do the same across the world,” Walker added, referencing the months of protests in his state over his efforts to limit the power of public sector unions in his state.

Pacing around the stage in shirtsleeves, Walker was high-energy, riding a wave in national polling following a well-received address in Iowa last month. Walker largely kept the momentum alive, drawing multiple standing ovations with criticisms of Washington, D.C. and the Obama administration.

“We need a leader in America who stands up and realizes that radical Islamic terrorism is a threat to our way of life and to all freedom loving people around the world,” Walker said in his speech to loud applause. “We need a president, a leader, who will stand up and say we’ll take the fight to them and not wait til they bring the fight to American soil for our children and grandchildren.

After the speech a Walker spokesperson said he in no way intended to compare Americans to ISIS.

“Governor Walker believes our fight against ISIS is one of the most important issues our country faces,” said his political action committee communications director Kirsten Kukowski. “He was in no way comparing any American citizen to ISIS. What the governor was saying was when faced with adversity he chooses strength and leadership. Those are the qualities we need to fix the leadership void this White House has created.”

“Let me be perfectly clear,” Walker told CNN after the speech. “I’m just pointing out the closest thing I have to handling a difficult situation, was the 100,000 protesters I had to deal with. There’s no analogy between the two other than difficult situation.” 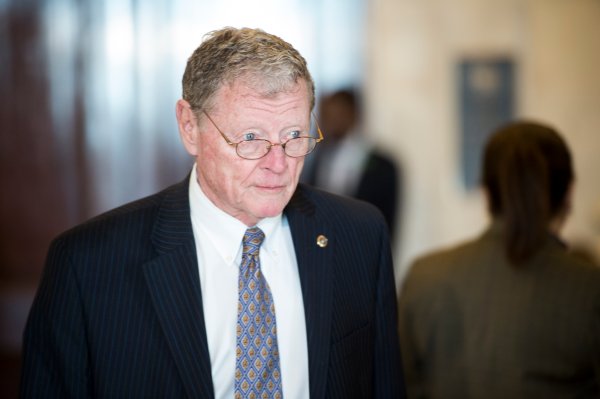