By Sam Frizell and Samantha Grossman

Oscar-winning actor and director Philip Seymour Hoffman was found dead in his New York City apartment Sunday. The beloved character actor began his career in 1991 in an episode of Law and Order, but later appeared in classic movies including The Big Lebowski, The Talented Mr. Ripley, Moneyball, and Capote, in which he played the title role.

Here, TIME takes a look back at seven of the actor’s best performances.

In what many film critics consider his breakout role, Hoffman played Scotty J. in Boogie Nights, a drama set in the world of the 1970s and ’80s adult film industry. Scotty is an enthusiastic gay boom operator who harbors an unrequited crush on Mark Wahlberg’s character, Dirk.

A year after his role in Boogie Nights, Hoffman landed a role in Happiness, a black comedy-drama about three sisters, their extended family and their neighborhood. Hoffman plays Allen, a neighbor who begins bombarding one of the women with obscene phone calls.

Hoffman shone as legendary music writer Lester Bangs in Cameron Crowe’s portrayal of the world of rock journalism. He’s the jaded, drug-abusing mentor to the young protagonist William, whom he advises to be “honest and unmerciful.”

Hoffman won an Academy Award for his portrayal of the eponymous writer in this biopic of Truman Capote. Hoffman plays the author as he researches his book In Cold Blood and develops a close relationship with convicted murderer Perry Smith.

Hoffman won plaudits, including an Oscar nomination for best supporting actor, for his performance as the leader of a religious cult who recruits a World War II veteran played by Joaquin Phoenix in The Master.

In his final completed role, Hoffman played intelligence agent Günther Bachmann in A Most Wanted Man, a film based on the spy novel by John le Carré. Read a preview by Catherine Mayer here. 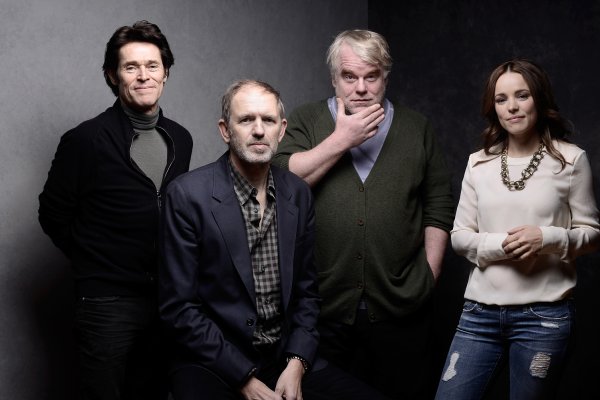 A Preview of Philip Seymour Hoffman's Last, Enthralling Role
Next Up: Editor's Pick