The Islamic State of Iraq and Greater Syria (ISIS) executioner who is believed to have killed several Western hostages in Syria was harassed by British security forces and prevented from moving to his native Kuwait to marry and start a new life in the months before he went to Syria, according to an advocacy organization he was in contact with.

Mohammed Emwazi, 26, was named by the Washington Post and the BBC on Thursday as the masked man who appeared in a series of videos that appeared to show him beheading hostages including American journalists James Foley and Steven Sotloff and Britons David Haines and Alan Henning. U.S. and U.K security agencies declined to confirm the identification.

Media reported that Emwazi, who was brought up in London, was known to British security agencies and had been questioned and detained on a number of occasions since 2009. In 2010, however, he contacted CAGE, a London-based organization that supports people victimized by security agencies, to complain that he was being made to feel “like a prisoner” in the U.K.

According to CAGE, Emwazi found himself the victim of harassment and abuse by U.K. authorities, which left him “greatly distressed.” In a statement about Emwazi, released on Thursday, CAGE research director Asim Qureshi said, “We now have evidence that there are several young Britons whose lives were not only ruined by security agencies, but who became disenfranchised and turned to violence because of British counter-terrorism policies coupled with long standing grievances over Western foreign policy.”

Emwazi’s first run-in with security officials took place in 2009, when he traveled to Tanzania with two friends, according to his testimony to CAGE. They were detained there and deported to Amsterdam, where he was interrogated by an officer of Britain’s domestic security agency MI5 who accused him of trying to travel to Somalia to join al-Shabab, an Islamist group. The officer then tried to persuade him to work for MI5.

During this time, M15 visited his fiancée in London who later broke off their engagement. Soon after, Emwazi moved to Kuwait, where he worked for a computer company and got engaged to a Kuwaiti woman. He visited London twice during this time, but when he attempted to return to Kuwait after his second visit, in 2010, Emwazi was detained and then barred from leaving the U.K. According to the BBC, Emwazi was being investigated by MI5 “as a suspected core member of an extremist network” operating in London.

In an email sent to CAGE in 2010, after he was prevented from traveling back to Kuwait, Emwazi wrote, “I never got onto the flight, what was the point, I said to myself: I’ll just get rejected. I had a job waiting for me and marriage to get started. But now I feel like a prisoner, only not in a cage, in London. A person imprisoned and controlled by security service men, stopping me from living my new life in my birthplace and my country, Kuwait.”

His message continued: “I have been trying to find out the reason for my refused visa issue from my home country Kuwait, and a way to solve the issue. So through my friends in Kuwait, it has been said to me that Kuwait has no problem with me entering, and the reason for my refusal is simply because the U.K. agents have told them to not let me in!!”

CAGE has claimed that MI5 also interviewed Emwazi’s fiancée in Kuwait and knew he was planning to “start a life” there.

Friends of Emwazi’s, who spoke to the Washington Post, said that it was after these incidents that the young man became more radicalized. CAGE’s Qureshi also noted in his statement that “suffocating domestic policies aimed at turning a person into an informant but which prevent a person from fulfilling their basic life needs would have left a lasting impression on Emwazi. He desperately wanted to use the system to change his situation, but the system ultimately rejected him.”

It’s unclear exactly when or how Emwazi left Britain and joined ISIS, though a former hostage told authorities after being released that “Jihadi John” was one of several militants guarding Western captives at a prison in Idlib, Syria, in 2013. Two other militants reportedly had British accents, along with Jihadi John, and the trio became known as “the Beatles.”

British authorities have estimated that as many as 600 Britons have traveled to Syria and Iraq to join groups like ISIS. Yet while the U.K.’s antiterrorism policies have many critics beyond CAGE, there are others who say that they’re not the cause of radicalization. Jonathan Russell, of the Quilliam Foundation, a counterterrorism think tank, told TIME in November, “I wouldn’t say that counterterrorism legislation makes people radical. It is a grievance that is exploited by radicalizers.” 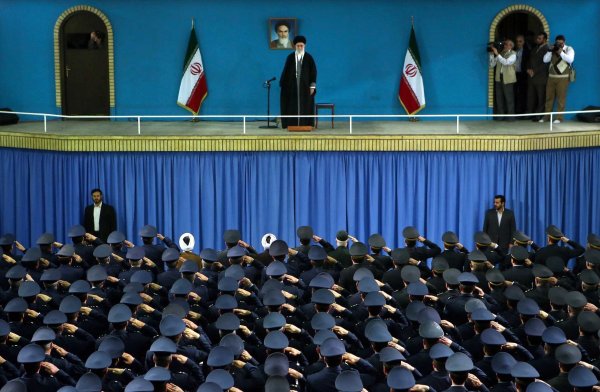 Why Iran Believes ISIS is a U.S. Creation
Next Up: Editor's Pick