Review: The Buried Giant Is an Arthurian Epic

Kazuo Ishiguro has spent a lot of time in cold wet fields today. Photographers like to put him there because it makes him look thoughtful and profound, and also because, in fairness, a lot of his new book The Buried Giant does take place in cold wet fields. “They take photographs outside in the English winter, in some kind of heath or something like that,” he says. “I’m going to write a very indoors book next time. Warm cafés.”

Ishiguro himself is a surprisingly warm and funny conversationalist–surprisingly given the persistent strain of existential bleakness that runs through his work, and his prose style, which tends to eschew humor and showy cleverness in favor of a direct, plainspoken tone. Ishiguro was born in Japan, but his family emigrated to England when he was 5, after his father took a job there as an oceanographer. Ishiguro’s first ambition was to be a singer-songwriter, a career at which he failed comprehensively. But when he switched to writing, success came rapidly. He won the Whitbread prize for his second novel, An Artist of the Floating World, and his third, The Remains of the Day, won him the Booker and was made into a film starring Anthony Hopkins and Emma Thompson.

But it’s been 10 years since his last novel, the stunning Never Let Me Go, which also became a movie. “I couldn’t get started,” he says, speaking by phone from his home in London. “I just couldn’t get a story to fit the questions I wanted to deal with.” Those questions were of a different order from the ones he asked in his earlier books. In the past, he focused on individual experiences, but now he wanted to look at the behavior of societies as a whole. Specifically, he was interested in memory, and the role that collective remembering and forgetting plays in the ways societies recover after catastrophes. He mentions Germany, the former Yugoslavia, Rwanda, South Africa–places where people did terrible things to one another and then had to learn how to live together afterward, side by side. How does a community move past that? “When is it better for a society to just agree to forget some bad things, so they don’t disintegrate into civil war or disorder or chaos?” he asks. “And when is it necessary to go back and really examine the seeds of things that are going wrong?”

Ishiguro didn’t want to tell this story in any country in particular. “I thought that as a novelist, that’s not really what I was about,” he says. “I wanted to take a little step back from these specific cases and try and look at this in a slightly more abstract or slightly more metaphorical level.” He hit on the solution while reading, improbably enough, the 14th century English poem Sir Gawain and the Green Knight. “There’s a picture of what Britain was like at that point, and it was a hell of a place,” he says. “There weren’t any inns or anything like that, so he had to sleep on rocks–I don’t know why he had to sleep on rocks, but it says he had to sleep on rocks. And there’s a very casual line in there where it says, ‘And he would be chased out of villages by panting ogres.’ This little glimpse of Britain at that point, it really sparked something in me. I thought, Oh, that’s a fun place. Maybe that’s a good landscape to put my story in. Ogres and all.” Ishiguro took a sudden swerve into science fiction with Never Let Me Go; now, equally unexpectedly, he has crossed the aisle into the fantasy section.

No one saw it coming, but wrong-footing readers is part of Ishiguro’s modus operandi. The Buried Giant is set in a misty, primordial England populated by feuding Saxons and Britons and haunted by traces of a great age just gone by: the ruins of the collapsing Roman Empire and the shadow of the late King Arthur, a few of whose sworn knights still roam the landscape in rusty armor. “You would have searched a long time for the sort of winding lane or tranquil meadow for which England later became celebrated,” Ishiguro writes (it’s the book’s first line). “There were instead miles of desolate, uncultivated land; here and there rough-hewn paths over craggy hills or bleak moorland.” This is a disenchanted landscape, not so much Arthurian as post-Arthurian: we are far from Camelot here.

The plot of The Buried Giant follows two elderly Britons, Axl and Beatrice, who have left their village to look for their son, who lives a few days’ walk away. At least they think he does. Lately, a strange enchantment has been clouding everyone’s memories, making even the recent past vague and uncertain. No one knows where it came from. “Perhaps God’s so deeply ashamed of us, of something we did, that he’s wishing himself to forget,” Beatrice says. “When God won’t remember, it’s no wonder we’re unable to do so.” Step by step the couple’s journey to their son becomes a search for those missing memories, and for the source of this strange mental mist. (The titular giant appears only once, early on, an ominous earthen mound that no one dares to disturb.)

As generally happens in Arthurian quests, a noble band assembles around Axl and Beatrice, including a hyper-competent Saxon warrior, a teenage outcast with a ghastly secret and Sir Gawain himself, touchy and past his prime but still formidable. He keeps a straight face, but Ishiguro has fun with the swords and sorcery: he’s a lifelong fan of samurai manga and westerns, and some of the action has the feel of a classic showdown scored by Ennio Morricone. “Gawain has some echoes of a certain kind of aging lonely gunfighter or samurai,” Ishiguro says. “That figure of the solitary rider and horse, caught in a wide landscape. Like the beginning of The Searchers.”

Ishiguro works this fantastical material with the tools of a master realist. When the characters encounter a monster by moonlight, Ishiguro describes it with a dispassionate, anatomical precision that makes us feel its sheer grotesque monstrosity with a force and freshness that have been leached away by legions of computer-generated orcs: “They might have been gazing at a large skinned animal: an opaque membrane, like the lining of a sheep’s stomach, was stretched tightly over the sinews and joints. Swathed as it was now in moonshadow, the beast appeared roughly the size and shape of a bull, but its head was distinctly wolf-like and of a darker hue–though even here the impression was of blackening by flames rather than of naturally dark fur or flesh.” Monsters often appear in literature as pallid metaphors. This one demands to be taken literally.

The closer Axl and Beatrice get to the source of the memory enchantment, the more our sense of triumphant anticipation is invaded by a creeping dread of what it might be concealing. If their memories come back, what will they remember? What would Axl and Beatrice learn about their ostensibly happy marriage? What would they learn about their own identities? (There are hints early on that Axl is more than he seems, or knows–there’s a whiff of Jason Bourne about him.) Likewise, the Saxons and Britons coexist uneasily but peacefully, but what might they have done to one another in the past? Is there a history of violence here, a cycle of vengeance that the mist of forgetfulness has temporarily paused? Maybe the forgetting isn’t a curse but a blessing. Visiting a monastery, the Saxon warrior perceives that it must originally have been built as an armed fortress. “This is today a place of peace and prayer,” he says, “yet you needn’t gaze so deep to find blood and terror.” As a species humans need to remember, but they also need, desperately, to forget, both as people and as communities, and those twin needs are finely, precariously balanced.

All this Ishiguro relates to us bluntly and plainly, almost willfully so, as if to do otherwise would be to distort the truth with the sparkly Instagram filter of eloquence. “I’m a kind of plain writer–that’s always my style,” he says. It fits the material. If at first Ishiguro’s language sounds flat and unadorned, it’s that very flatness that makes you wonder what’s buried underneath. It’s a voice he found before he ever started writing, back when he was still a singer-songwriter. “I’d gone through various ways of writing songs, and I ended up with something that was quite plain on the surface,” he says. “The emotions would be there, but they’ll be slightly obliquely there, in the words themselves. People have to feel it between the lines.” 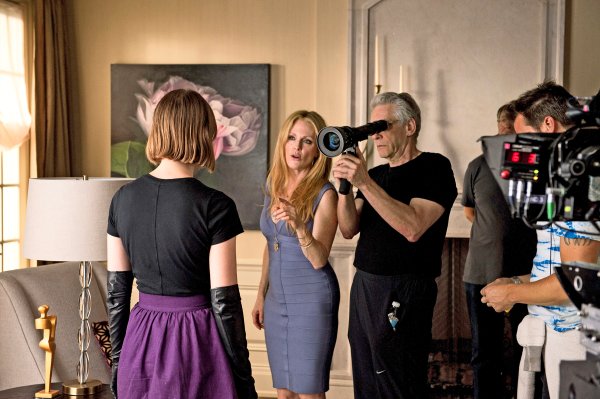 Maps to the Stars Shows an Oscar Winner’s Untamed Side
Next Up: Editor's Pick