In a week during which Rudolph Giuliani went crusader-ballistic questioning President Obama’s patriotism–indeed, questioning his upbringing–Jeb Bush gave a speech about foreign affairs, the third serious policy speech he’s given this winter. Giuliani got all the headlines, of course. That’s how you do it now: say something heinous and the world will beat a path to your door. And Bush’s speech wasn’t exactly a barn burner. His delivery was rushed and unconvincing, though he was more at ease during the question period. He was criticized for a lack of specificity. But Bush offered something far more important than specificity. He offered a sense of his political style and temperament, which in itself presents a grownup and civil alternative to the Giuliani-style pestilence that has plagued the Republic for the past 25 years.

It has been the same in each of Bush’s three big speeches. He is a political conservative with a moderate disposition. And after giving his speeches a close read, I find Bush’s disposition far more important than his position on any given issue. In fact, it’s a breath of fresh air. I disagree with his hard line toward Cuba and the Iran nuclear negotiations, and I look forward to hearing what he has to say about reforming Obamacare. His arguments so far merit consideration, even when one disagrees with them.

There is none of John McCain’s chesty bellicosity. Bush makes no false, egregious claims, on issues foreign or domestic. He resists the partisan hyperbole that has coarsened our politics. He even, at one point in his foreign policy speech, praised Obama for the position he has taken on–get a map!–the Baltic states. He proposes a return to the bipartisan foreign policy that was operational when this nation was at its strongest. And he criticizes Obama for the right things: his sloppy rhetoric, his lack of strategy. You don’t say “Assad must go” and then let him stay. You don’t announce a “pivot” toward Asia–what are you pivoting away from? You don’t put human rights above national security, as Obama has done in his arm’s-length relationship with Egypt, which is actually fighting ISIS on the ground and in the air.

Bush’s economic vision is traditionally Republican. He believes the economy is more likely to grow with lower taxes than with government stimulus. He doesn’t bash the rich, but he doesn’t offer supply-side voodoo, either. The American “promise is not broken when someone is wealthy,” he told the Detroit Economic Club. “It is broken when achieving success is far beyond our imagination.” He is worried about middle-class economic stagnation, about the inability of the working poor to rise–his PAC is called Right to Rise. His solution is providing more opportunity rather than income redistribution. We’ll see, over time, what he means by that. And he favors reforming the public sector, especially the education and regulatory systems, as a way to create new economic energy. “It’s time to challenge every aspect of how government works,” he told a national meeting of auto dealers in San Francisco.

This would be a good argument to have in 2016. It is a fundamental challenge to what the Democrats have allowed themselves to become: the party of government workers rather than a defender of the working-, middle-class majority. Bush has already drawn fire for his record as an education reformer, with his support for charter schools and educational standards. But his argument goes beyond that to a more fundamental critique of government. He has praised the work of Philip K. Howard, whose book, The Rule of Nobody, is a road map for de-lawyering and rethinking the regulatory system.

Again, the way Bush talks about governmental sclerosis is the important thing. It’s no surprise he’s in favor of the Keystone pipeline and hydraulic fracking–he’s invested in fracking–but listen to this: “Washington shouldn’t try to regulate hydraulic fracking out of business,” he told the auto dealers. “It should be done reasonably and thoughtfully to protect the natural environment.” There is no call to blow up the Environmental Protection Agency or ignore science. But there is awareness of a radical truth: that there is no creative destruction in government. The civil service laws written in the 19th century, the regulations written before the information age, are ancient, slow-motion processes that have corroded the government’s ability to operate effectively.

Bush’s fate will tell us a lot about the Republican Party. He does not seem to be an angry man, and the need to screech has been the great Republican vulnerability in recent presidential campaigns. His candidacy takes crazy off the table–no nutso talk about vaccinations or evolution or the President’s patriotism. Even if you disagree with him, his civility demands respect. 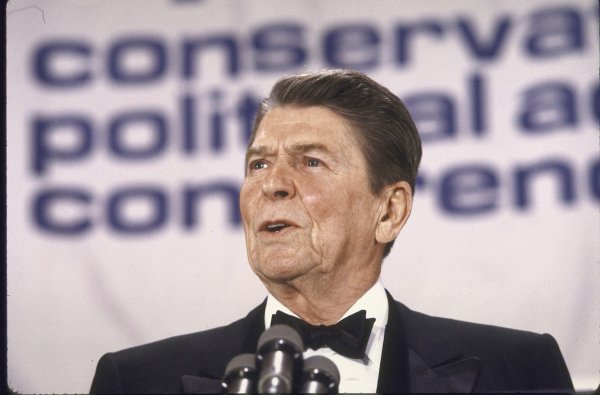 Why Ronald Reagan Is Such a Big Deal at CPAC
Next Up: Editor's Pick