At the edge of the Mojave Desert, about 80 miles (130 km) east of Palm Springs, Calif., millions of midnight blue solar panels stretch to the horizon, angled toward the sky like reclining sunbathers. Here, the sun has few enemies. It shines at least 300 days of the year, bathing the more than 8 million photovoltaic (PV) panels at the Desert Sunlight Solar Farm in daylong streams of rays. All that free sunlight is converted into electricity that flows into California’s thirsty power grid, eventually helping charge iPhones in Los Angeles and switch on TVs in Sacramento.

The possibility of solar power on such a massive scale seemed remote just a decade ago. Solar was seen as a small solution to small problems, a novel way for your environmentally minded neighbor to show off his green credentials, yet too expensive to ever be economical. But that’s changed as a dramatic increase in solar-panel production–brought about by a global expansion in manufacturing capacity–has sent costs plummeting. Increasingly efficient second-generation solar technology can squeeze more energy from the sun’s rays at a lower cost, and the federal government has opened vast tracts of public land to massive for-profit ventures like Desert Sunlight.

As a result, solar power in America has officially grown up. The two largest solar power plants in the world—Desert Sunlight and Topaz Solar Farm, about 400 miles (640 km) to the west in central California—have come online in the past three months. While the first U.S. solar plant, built in 1982, generated 1 megawatt of electricity, Desert Sunlight generates 550 megawatts. Topaz produces the same amount. Together their impact on carbon emissions is equivalent to taking 130,000 cars off the road while providing 340,000 homes with clean energy. “These projects [are] the first utility-scale projects that are really on the scale of a conventional coal or nuclear power plant,” says Harry Atwater, a professor of applied physics at the California Institute of Technology.

Utility-scale solar plants were nowhere to be found on public lands just a few years ago, in part because it was too costly to build them. Desert Sunlight, which was officially dedicated Feb. 9 on 3,800 acres (1,540 hectares) of land administered by the Bureau of Land Management, is now the sixth operational solar plant on federal property. Twenty-nine other solar projects have been approved for public lands, and eight are currently under construction in California and Nevada. And there’s room for more. The federal government administers almost 250 million acres (101 million hectares) of U.S. territory, roughly one-ninth of the country, most of it in the West and much of it desert with abundant sunlight—perfect for millions of photon-hungry solar panels.

“When the [Obama] Administration came on board, it was clear that clean energy was a priority,” says Ray Brady, manager of the National Renewable Energy Office for the Bureau of Land Management (BLM), who notes that the Department of the Interior met its target of generating 10,000 megawatts of solar energy in 2012, three years ahead of schedule. (The department has approved more than 16,000 solar megawatts.) “Desert Sunlight was very important in meeting that goal.”

But getting the location right was critical. Utility-scale solar plants need to be somewhere with year-round sun, in a space large enough to hold hundreds of thousands of solar modules but close enough to civilization to easily connect to the energy grid. Desert Sunlight sits just outside Desert Center (pop. 204), a tiny town southeast of Joshua Tree National Park. Average high temperature in July: 104°F (40°C). In January: 65°F (18°C). Average annual rainfall: 4 in. (10 cm). “It’d be safe to say just about every day you’re going to get some sunlight,” says Steve Krum, a spokesman for First Solar, which built and operates the plant.

The site’s millions of 2-by-4-ft. (0.6 by 1.2 m) panels are each covered by a thin film of glass that absorbs sunlight and captures electrons, creating an electrical current that flows into wires in the back of each module. That energy is converted from DC power into usable AC power by inverters and is sent to the electrical grid via a nearby substation. Each panel generates approximately 90 to 100 watts.

Desert Sunlight originated at a time when engineers were just figuring out how to produce solar panels on a mass scale. In the past, panels were often made using silicon, which tended to yield more energy but were expensive and difficult to mass-produce. But First Solar, which is based in Tempe, Ariz., and bought the rights to Desert Sunlight in 2010, has shied away from silicon and instead produces “thin-film” panels made with cadmium telluride, which can be cheaper than silicon but less efficient in converting sunlight into energy.

The favorable economics of thin-film PV work only if silicon remains expensive. In 2011, the price of silicon began falling rapidly, as cheap, government-subsidized Chinese PV panels flooded the market. Solyndra, a solar-energy company championing what it believed were innovative and more efficient panels made of cylindrical tubes, became a punching bag for conservatives after cheap silicon forced the company to declare bankruptcy in 2011 despite a $500 million loan guarantee from the federal government. But First Solar, which makes its solar modules in the U.S. and Malaysia, is betting on its automated, in-house production and less-expensive components to insulate it from fluctuations in the market. The company also successfully increased its panels’ energy output, recording the highest efficiency standards so far for any thin-film technology.

Judging by its scale and location on thousands of acres of public land, Desert Sunlight seems like other sprawling, ambitious government projects before it, a Hoover Dam for the age of climate change. But the development of the plant says a lot about the new way many public-works projects are built in the U.S. today.

Desert Sunlight was the brainchild of private firm OptiSolar (later acquired by First Solar), which saw a market opportunity in helping California’s utility companies meet tough state mandates to produce a third of their energy from renewable sources by 2020. (The state currently gets 20% of its energy from renewables.) Desert Sunlight was supported by a loan guarantee from the Department of Energy worth $1.5 billion, but the plant is owned by NextEra Energy Resources, GE Energy Financial Services and Sumitomo Corporation of America, while the actual facility was built by First Solar. That means the world’s largest solar farm was conceived by private business that profited from tighter state environmental regulations, with their costs underwritten in part by a federal incentive program.

It’s a model that appears to be paying off. Solar is now a $15 billion business in the U.S., employing more people than coal mining, even as costs continue to decrease. Solar panels, for example, are twice as cheap as they were four years ago. In 2014, solar energy accounted for 36% of the country’s installed new energy capacity, according to the Solar Energy Industries Association. “It’s hard to convey how this industry has gone from being like a small jewelry business to a bricks-and-mortar paving business,” Atwater says. “And when Desert Sunlight was conceived, I think people thought it was this ambitious California thing to do and wasn’t very economical. But now it’s economical.”

The Future of Solar

The big question is whether projects this large are sustainable. As the price of oil and natural gas continues to drop, solar energy looks less desirable as other sources become more affordable in the short term. First Solar’s stock, for example, has dipped as oil prices have decreased. The BLM’s Brady says that while there are a number of solar projects in the works, applications for large projects on federal lands have fallen significantly.

Federal support is also drying up. A 30% federal investment tax credit will decrease to 10% by 2016. California, meanwhile, is on track to meet the state-mandated standards of 33% renewable energy by 2020. But once it does, that could reduce the incentive to continue producing solar in the state unless a tighter goal is mandated.

The energy business itself is also changing. As photovoltaic technology has gotten cheaper and energy meters have gotten smarter, it’s now possible to build a more distributed grid where electricity is generated on a smaller scale, house by house. SolarCity, for example, which designs and installs residential solar panels, has allowed individuals to drastically lower their electric bills through PV panels attached to their roofs–and often at prices that are next to nothing.

All of which means that solar power may succeed without more utility-scale projects like Desert Sunlight coming online. First Solar has plans to build a 750-megawatt plant in Riverside, Calif., even bigger than Desert Sunlight or Topaz. But so far, only 200 megawatts of energy have been purchased. First Solar’s Krum says that he doesn’t expect many more large solar stations to come online anytime soon. Future plants may end up being half the size of these new behemoths.

Desert Sunlight is undoubtedly a wonder, a glittering oasis in the desert that is the first of its kind. And as it turns out, it may also be the last. 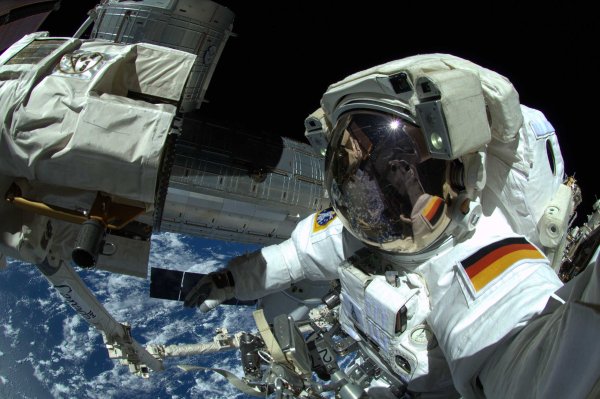 See The 10 Best Space Selfies Ever Taken
Next Up: Editor's Pick