Members of the specialized and general jury for the 2015 World Press Photo Contest.
Bas de Meijer
By Olivier Laurent

The mayor of Charleroi, Belgium, has asked World Press Photo to withdraw an award given to Italian photographer Giovanni Troilo for a series of images that he says “undermines” his city and its inhabitants.

In his work, Troilo says that the city of Charleroi “has experienced the collapse of industrial manufacturing, rising unemployment, increasing immigration and outbreak of micro-criminality. The roads, once fresh and neat, appear today desolated and abandoned, industries are closing down, and vegetation grows in the old industrial districts.”

In an extended description, published on his website, the Italian photographer, which calls Charleroi the “dark heart of Europe,” adds: “A perverse and sick sex, race hate, neurotic obesity and the abuse of psychiatric drugs seem to be the only cures being able to make this endemic uneasiness acceptable.”

In a letter, seen by TIME LightBox and sent to World Press Photo and Michele McNally, chair of this year’s jury and director of photography at the New York Times, Charleroi’s mayor Paul Magnette expresses his surprise and dismay, claiming that “the photographer’s constructed photographic subject is regarded by [Charleroi] as a serious distortion of reality that undermines the city and its inhabitants, as well as the profession of photojournalist.” Troilo has yet to return a request for comment on the claims.

Magnette continues: “Indeed, this work uses essentially staging technique that adds to the drama of the images through an artificial lighting. If this was a private artwork, it would not be a problem. Unfortunately, the photographer does not seem to present his work as such. He claims to be doing investigative journalism; a photo essay reflecting a simple reality. But this is far from being the case: the falsified and misleading captions, the travesty of reality, the construction of striking images staged by the photographer are all profoundly dishonest and fail to respect the codes of journalistic ethics. In our opinion, this work does not comply with the objective of the competition.”

The mayor’s letter goes on to analyze Troilo’s photographs and captions, including one that purports to show a couple having sex in a car. Troilo submitted the image to World Press Photo with the caption: “Locals know of parking lots popular for couples seeking sexual liaisons.” On his website, however, the photographer reveals that the image was set up: “My cousin accepted to be portrayed while fornicating with a girl in his friend’s car. For them it was not strange.”

Troilo’s work should be reevaluated, the mayor concluded. “Charleroi is not, on any account, the black heart of Europe,” Magnette writes. “You will not find one single inhabitant who will recognize his city in these pictures, not to mention the captions that look more like a settling of scores than a reportage.”

World Press Photo has confirmed receiving the letter. “We are currently verifying the facts behind the photo story, as we do with all the prizewinning pictures, and we are in touch with the photographer Giovanni Troilo,” a spokeswoman tells TIME.

The controversy comes after World Press Photo and various international photography organizations have been debating the use of post-processing techniques, which led to the disqualification of 20% of entries in the competition’s penultimate round. 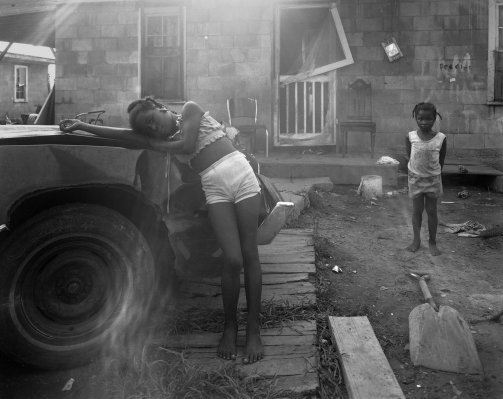 Photographing Black Lives in America's South
Next Up: Editor's Pick